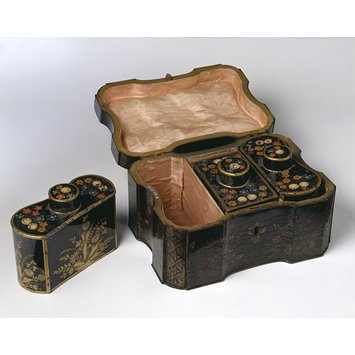 Tea, introduced into Europe in the late 17th century, was a valuable commodity. It was kept securely in elegant boxes with secure locks. At that time, these were usually known as 'tea chests', although they are now generally referred to as 'tea caddies'. Such boxes often contained two or more compartments for different types of tea, or for sugar, stored in small metal containers known as 'tea canisters'.

Designs with Chinese motifs, reflecting the source of the tea, were particularly popular. As real Asian lacquer was exceptionally expensive, many more wares were made in Europe and painted with translucent varnishes to imitate lacquer. In 1730 the Martin brothers of Paris were granted a monopoly on their particular recipe for such varnishes and the term vernis Martin or ‘Martin’s varnish’ is now the common term in France for any decoration of this type, whether or not made to their recipes. In England such techniques are generally known as ‘japanning’.

Rectangular wooden tea caddy with inverted convex curved sides, canted corners and a hinged lid. The exterior of the box is japanned black with polychrome painted decoration of sprays of flowers and oriental figures. The inside of the box and lid are entirely lined with pink silk, the box divided into three compartments each of which holds a reciprocally shaped japanned tin canister decorated with gold sprays of flowers on the sides and polychrome floral motifs on the top.

The box and lid are constructed on the same principal: the uprights that form the four canted corners are slotted into rebates cut into each side of the front and side uprights on their inner face. The joints are secured with pegs or headless nails, the shape of which can just be made out beneath the japanned surface, at either end of the front, back and sides. We cannot see how the uprights are secured to the top of the lid or the bottom of the box, they butt up against them and are probably secured with glue.

The box is divided into three compartments of more or less the same width and depth. The middle compartment is rectangular but the two either side of it are curved on their front, back and outer sides following the curves of the box itself. The compartments each house a reciprocally shaped tin canister. The two outer canisters have small round lids which slide onto a round neck; the central canister has a knob the same shape as the lids but it is soldered to the rectangular top of the canister which lifts as a whole. The middle canister does not fill the full depth of its compartment but is original to it. This extra space may once have been used to store a spoon.

The top and sides of the box are covered in black japanned decoration. The underneath of the box is also painted black but this is now very worn and the wood is almost showing through. Around the sides of the box are sprays of flowers, insects and geometrically repeating foliate motifs running down the corners. On the lid of the box there are three oriental figures in a scrolling rococo gazebo. The figure on the left is seated, reclining and looking towards the other two figures. The figure in the middle is down on one knee and seemingly offering a bowl to the reclining figure. The figure on the right is standing and holding forward a bowl of flowers, again in the direction of the reclining figure. Some areas of the scrolling motifs and the figures’ clothing are slightly raised although we cannot see how this effect is produced here.

The japanned decoration on the canisters consists of a thin layer of black (which is probably made up from several layers but appears very thin through areas of damage) painted directly onto the metal surface of the canister. The sides of the canisters have retained their glossy sheen. Their tops, like the outer surfaces of the box, are duller in finish. The floral decorative motifs on the top and sides of each canister are then painted onto this surface. Some of the polychrome flowers on the top of the canisters (as on the box lid) are slightly raised. Damage to some of the raised areas reveals a dark, textured layer immediately beneath the painted surface but it is difficult to tell if this is a thick layer of japanning or some other material. It is likely that the same technique was also used for the raised areas on the box lid.

Spa (Probably. Monica Kopplin (see refs.) no. 28, pp. 178-9 illustrates a set of dressing boxes of precisely similar outline and attributes these to Spa in Belgium, noting that the form of such boxes originated in France and was known as forme violon (fiddle-shaped), the boxes known as cassette violonné. Painted decoration on boxes from Spa was simply varnished, however, and was much less hard-wearing than the products of the japanning workshops in Paris.
There is a comparable dressing box in the Museum of Spa, inventory number B1077, the same shape and similar decoration, dated to the second quarter of the 18th century.

Formerly in the J.H. Fitzhenry collection. Purchased by the Museum for £10 (RF 13/3998, where it is described as 'Lacquered box with key containing three tea caddies. No. 2604') after the death of Mr Fitzhenry. The numbering presumably relates to the numbering of the loan.

In the 18th century, the consumption of tea, like coffee and chocolate, was largely the preserve of the elite and demanded elaborate rituals. It provided commercial opportunities for manufacturers and importers of tablewares, and new vessels for preparing and serving those drinks were introduced. Elegance of presentation was essential, as the fashion for the new hot drinks went hand in hand with an increased emphasis on etiquette, and refined behaviour.

An imitation of Japanese and Chinese lacquer, Vernis Martin is a generic term refering to high-quality japanning produced in 18th-century France. Intended as a substitute for Oriental lacquer, Vernis Martin was applied in a similar manner to true lacquer: several layers of varnish, each left to dry and rubbed down before the next application, were applied on to the piece. Vernis Martin was produced in many different colours ranging from black and red and to a deep Prussian blue. It bears the name of its most accomplished practitioners, the brothers Guillaume and Etienne-Simon Martin who perfected the technique in the 1730s and were granted letters of patent for it. Also highly skilled at restoring Asian lacquer, the brothers' reputation was such that Voltaire commented that they had 'surpassed the art of China'. Since pieces were neither signed nor marked, the Martin brothers' authorship can be difficult to establish. As Kopplin established, the only genuine indicators of Vernis Martin are the high quality of the lacquer and the painting, and the inventive use of ornamental techniques.

Rectangular tea chest, the sides with rounded, outset corners, forming a fiddle-shaped outline, the chest and the three metal caddies which it contains with japanned decoration on a black ground

High-quality French imitation lacquer is often called vernis Martin after the Martin brothers who perfected the technique in the 1730s.

Their recipes required numerous coats of varnish, made with plant resins suspended in a drying oil. This gave a hard, transparent surface and a wide range of brilliant colours, suitable for furniture, panelling and coach panels.
[01/12/2012] 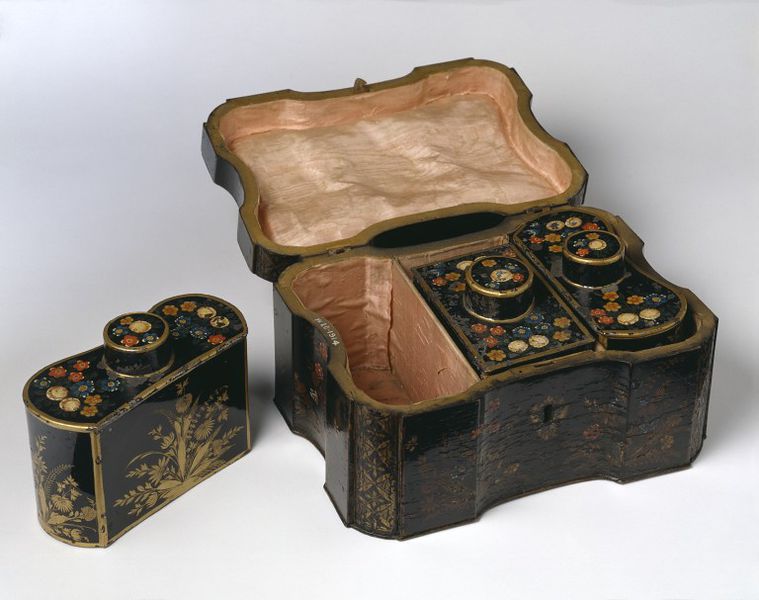