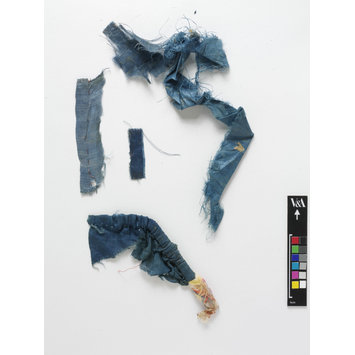 These four textile pieces are of plain-woven blue silk. It is unclear what they would have been used for, although they are likely to have had a decorative purpose.

The pieces were recovered from Cave 17 of the Mogao Grottoes. This shrine site is one of China’s great Buddhist pilgrimage complexes and is situated near the oasis town of Dunhuang. The site is also part of an area of Central Asia now called the Silk Road, comprising a series of overland trade routes that crossed Asia from China to Europe. The most notable item traded was silk. Camels and horses were used as pack animals and merchants passed the goods from oasis to oasis. The Silk Road was also important for the exchange of ideas. While silk textiles travelled west from China, Buddhism entered China from India in this way.

These textiles were brought back from central Asia by the explorer and archaeologist Sir Marc Aurel Stein (1862-1943). The Victoria and Albert Museum has around 600 ancient and medieval textiles recovered from the Silk Road by Stein at the beginning of the 20th century. Some are silk, while others are made from the wool of a variety of different animals.

Four pieces of different shapes in monochrome plain weave blue silk. Remnants of stitching, traces of paint, and different coloured threads entangled. One piece is a small rectangular fragment, second piece has an edge turned under and shows stitching, third piece has ragged edges and buff pieces entangled in the threads and with remnants of painted design, fourth piece turned over at one edge, stitched down, and a wadding of coloured silk threads inserted.

Textiles have been housed in a cream envelope which has probably been labelled by either or both Marc Aurel Stein and his assistant Miss Lorimer. 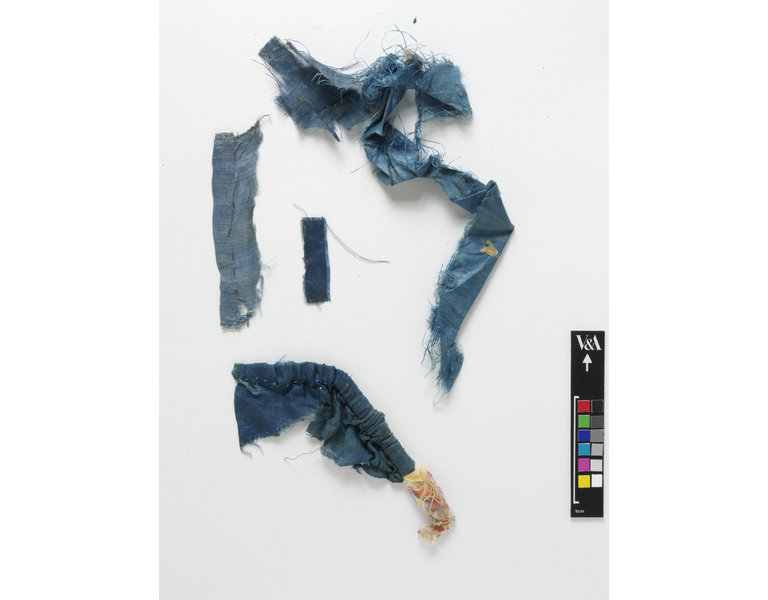