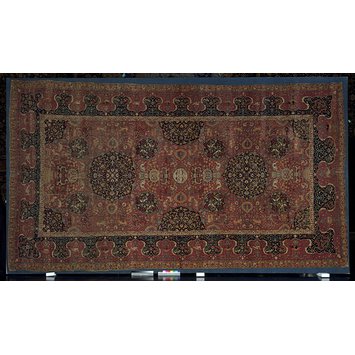 The beautiful carpet was woven in Iran, probably in the first half of the sixteenth century, during the reign of the Safavid dynasty. While it does not have any inscriptions linking it with a specific patron, place or date, the design holds many parallels with the arts of the book in early Safavid Iran, and with similar hunting carpets.
Despite its large scale, this medallion carpet has a fine and complex design that rewards very close inspection. In its general layout, there are two lobed black medallions down the central axis, with four diagonal radiating oval pendants each, all set against a dark red main field. These medallions are then repeated by quarter-medallions in the four corners of the field, and by two half-medallions on either side. Each medallion is filled with a very refined radial design of yellow strapwork and large flowers, while each oval pendant is occupied by fluttering birds and Chinese-style cloudbands. Below this medallion superstructure, the red main field is a rich and varied garden landscape of trees and wildlife. There are trees with white blossoms, and others filled with ripe pomegranates. There are also leafy spiralling stems, with large lotus flowers. Among this greenery, the carpet is filled with animals and birds: there are resting pairs of spotted goats, lions and treetop birds. Predominantly though, the main field is full of hunting scenes: leopards killing horned goats, hawks killing long-legged water birds and lions killing stags. Down the central axis of the design, there are ornate Chinese style vases, formed of dragons, lions and peacocks, and lobed ponds full of fish.
Beyond the main field, the main border features a reciprocal pattern, of an interlocking arcade in red versus black (or rather extremely dark blue indigo). On a slightly more condensed scale to the main field, this border also features hunting pairs: a snow leopard attacking a horned goat, and a lion pinning down a bull. A beautifully drawn pair of supernatural creatures confront each other in the dark blue arcading: a Chinese-style dragon opposite a long-tailed phoenix. Throughout the main and two minor borders, the design also features overlaid designs of leafy plant scrolls and Chinese cloudband motifs.

The Chelsea Carpet is so called because the Museum purchased it from a dealer in Chelsea (in southwest London), named Alfred Cohen, in 1890. Aside from this, the carpet's provenance is not known, but its quality of design and production strongly suggests a court-level workshop in early sixteenth-century Iran.

The main field contains two large X-shaped compositions made up of large and small medallions. They are balanced by the central device - two vases of flowers on elaborate stands, set on either side of a fish pond. Half of this central device is repeated at either end. The densely decorated field and border includes many animals, shown in repose or in combat.

The history of the carpet is unknown. It is called the Chelsea carpet because it was purchased from a dealer in that part of London.

Museum no. 589-1890 [Jameel Gallery]
THE CHELSEA CARPET was given its name simply because it was purchased from a dealer in the Kings Road, Chelsea. It is a 16th century Persian carpet and may have been woven in Tabriz, in the north-west of that country. It is one of the most beautiful and most important Persian carpets to have survived from that period.

This is a small-scale design for personal appreciation and is quite unlike the ceremonial grandeur of the Ardabil Carpet (displayed to the right). The ground of the Chelsea Carpet is like a private estate with grazing and fighting animals and blossom and fruit trees - there are exquisite details such as the ripe pomegranates which have burst open to reveal their seeds. There are elegant dragons in the blue part of the main border and small animal heads are placed among the tracery of the outer border. There is one unusual asymmetrical feature in the end borders: there are four curving red niches at one end and only three at the other. It is possible that these niches indicate place-settings for guests who would be seated around the carpet, with the three most important along one end. In which case the central motifs may represent tableware - central roundel is certainly like a Chinese celedon bowl and there are Chinese-style vases of flowers to either side. Twenty-five people could be comfortably accommodated. [Used until 10/1997] 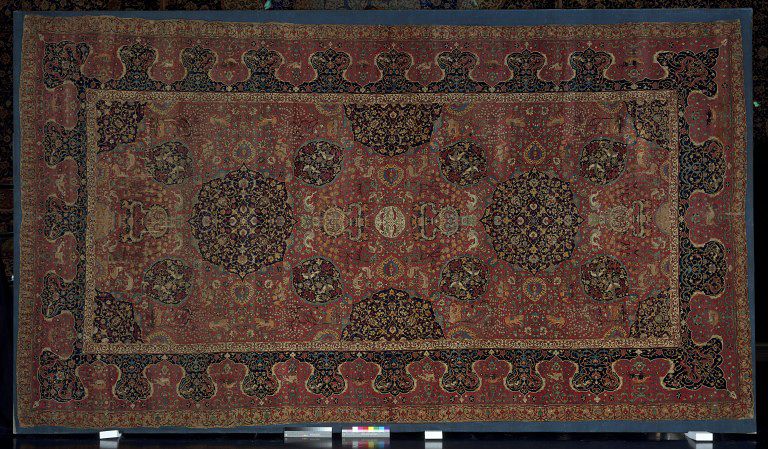