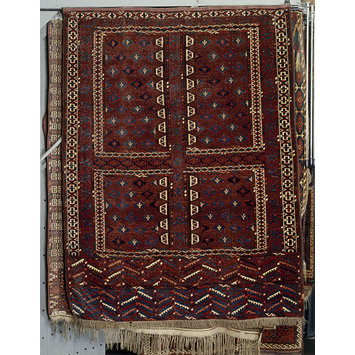 SIDE FINISH: both sides have one cord oversewn with dark blue wool.

DESIGN: quartered ensi design divided horizontally with an overlying central vertical band, the quarters having a dark red ground. In the upper quarters are nine bands of offset stepped polygons in diagonal rows of dark blue, green and blue, each one containing a trident in a contrasting colour with a maximum of three per band. Along the vertical division both quarters have a row of nine white half hexagons divided into three dark red triangles with alternating green and blue centres. The lower two quarters are smaller, with six bands of motifs and five half hexagons.

The central horizontal band has a dark blue ground with one band and two halves of stepped polygons - five on each side of the vertical band.

The central vertical band has a green ground with a dark red angular meander outlined in red, repeated in the main border along the top and sides only.

Inner border surrounds both pairs of quarters, only broken by the overlay of the vertical band at the centre of the ensi; it has a white ground with red and gree hexagons (the upper border includes dark blue ones) on a central dark blue line while on the sides the hexagon becomes a quartered lozenge of red/green or red/dark blue.

Outer border lies across the top and down both sides as far as the elem. It has a dark blue ground with white crosses separated by pairs of inwardly pointing white triangles; the latter contain red triangles and the former dark blue crosses which, along the sides as far down as the central horizontal band, have pink centres. Below this band the internal crosses are variously green, red or barred as well as dark blue and those on the left are without a centre.

Guard stripes: all the above borders have guard stripes with a dark red ground and colour-paired diagonal blocks.

Elem: in two bands, the upper having a dark red ground and the lower a dark blue one. The upper is divided by narrow vertical lines into 12 panels and the lower into 13, each containing five diagonals, with a saw-toothed lower edge, in various colours, the direction alternating between panels; alternate poles between panels are barbed with small triangles.

The border above, between and below these two bands is a minor band, with a dark red ground, of fork-tipped 'S' motifs in various colours. Along the sides there is only the outermost guard stripe described above. 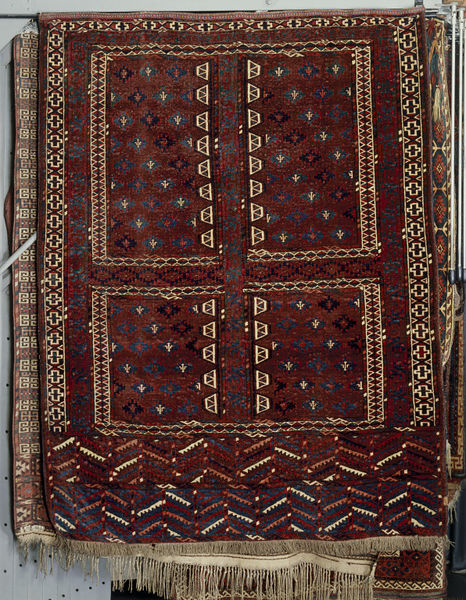