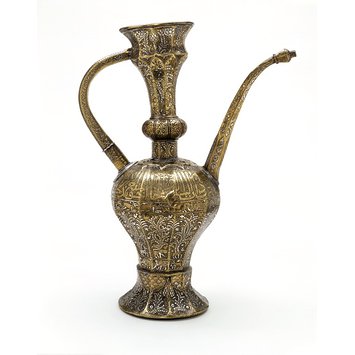 According to the inscription, this ewer was made for Fatima, the wife of Sultan Qa’itbay (ruled 1468–1496). In contrast to the wares produced for the many religious buildings furnished by the pious sultan, which were appropriately aniconic in their decoration as required under the tenets of Islam, Fatima’s ewer includes bands of real and fantastic animals amidst luxuriant trees. Similar imagery was used in Arabic poetry and had mystical connotations (such as the verdancy of Paradise); it seems safe to assume that this was not lost on Fatima herself.

Large ewer on a footed base, with flared mouth, bulbous element on neck leading to rounded body, tapered stem and flared foot. Curved handle runs from neck to top of the body, spout long and thin ending in polygonal element. Some damage to body, bulbous element on neck possibly later, repairs to base of handle. All over decoration of arabesques and animal designs with large inscription band in thuluth script. Band of running animals around body features elephants, deer and lions.

Brass hammered and inlaid with silver and possibly copper

inscription
Made by Ahmad
underneath foot

Ewer made for the wife of Sultan Qa'itbay, Egypt (probably Cairo), 1496.

According to its inscription, the ewer was made for Fatimah, the wife of Sultan Qa'itbay. Naming a female patron was rare. The decoration, too, is unusual for its period, as it shows animals. These appear among trees on the lower part of the body and the neck.

Brass inlaid with silver, copper and coloured compositions. Made by Ahmad 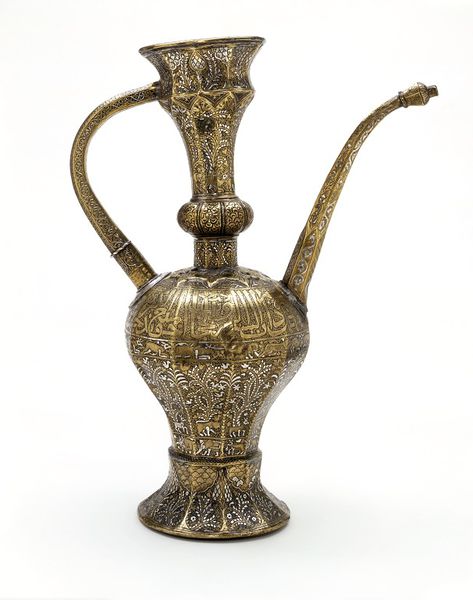