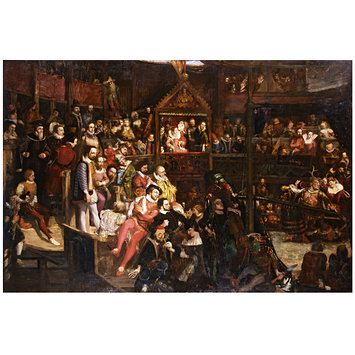 David Scott, Queen Elizabeth Viewing the Performance of 'The Merry Wives of Windsor’ in the Globe Theatre (1840).

This oil painting by David Scott (1806–49) was exhibited at the Royal Academy in 1840. It is one of the first attempts to depict the interior of the first Globe theatre. Scott was inspired by the tradition, recorded by Nicholas Rowe in his 1709 edition of Shakespeare’s works, that Queen Elizabeth so liked the character of Falstaff in the Henry IV plays that she commanded a new Falstaff play to show the fat knight in love. There is no evidence that Elizabeth ever visited a public theatre, but Scott imagines the Queen and her court attending a performance of The Merry Wives of Windsor. She is seated in an anachronistic Royal Box, accompanied by the Earl of Leicester wearing armour, the Earl of Essex, and Sir Francis Walsingham. The audience is packed with well-known historical figures of the day, including Sir Walter Raleigh (seated, in red), Edmund Spencer, Beaumont and Fletcher, Ben Jonson, Dr John Dee, Lord Burleigh, Sir Philip Sidney (who had died in 1586, long before the Globe was built), Francis Bacon, Sir Francis Drake, Philip Massinger, and Thomas Harrington. Shakespeare himself is standing on a platform at the end of the seats, centre left.

Scott was creating an ideal audience of the most prominent figures of the Elizabethan age. He drew upon collections of engraved portraits, such as Edmund Lodge’s Portraits of Illustrious Personages of Great Britain (1821–34) and James Granger’s Biographical History of England (1769–74), often adding his own variations to the standard engravings. His Shakespeare is derived from the Chandos portrait (now in the National Portrait Gallery) and Queen Elizabeth’s image is a composite one derived from various sources. The theatre itself is based on written descriptions in Malone’s edition of Shakespeare’s plays (1790) and John Payne Collier’s History of English Dramatic Poetry (1831), although Scott’s auditorium more closely resembles early 19th-century theatres, with a dress circle and gallery.

Interior of the Globe Theatre during an imagined performance of The Merry Wives of Windsor. Falstaff, wearing antlers, stands between the Merry Wives, right, watched by Elizabeth I and her courtiers from a stage box, centre back. An audience of notable Elixabethans watches the play, including Shakespeare, standing on a platform at the end of the seating centre left.

Painting by David Scott, entitled Queen Elizabeth Viewing the Performance of 'The Merry Wives of Windsor' at the Globe Theatre, 1840

This painting is based on the legend that Shakespeare was commanded to write The Merry Wives of Windsor so that Queen Elizabeth could see Falstaff in love. Although Elizabeth I never actually attended a public playhouse, the artist shows her at the Globe in the company of well-known historical figures, including Ben Jonson, Francis Drake, Walter Raleigh and Shakespeare himself. 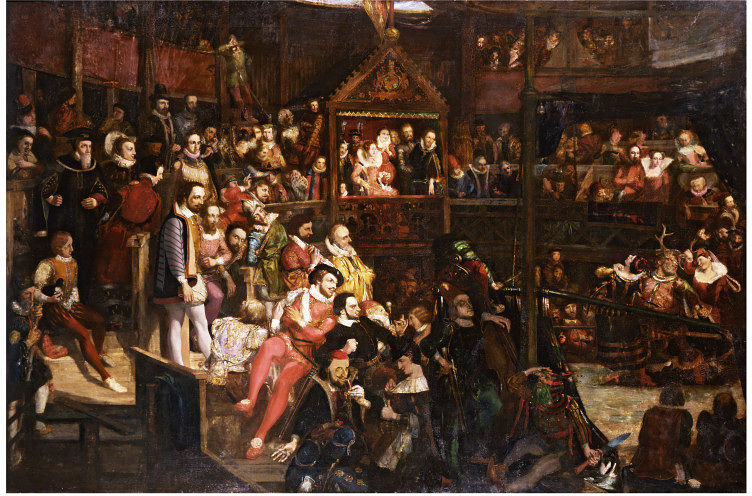