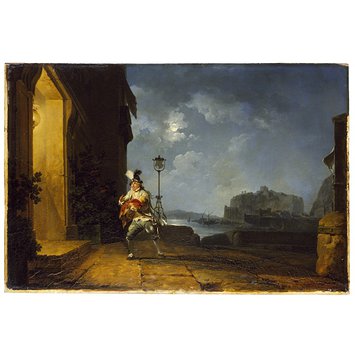 David Garrick as Don John in The Chances by John Fletcher, adapted by George Villiers

Bequeathed by Rev. Alexander Dyce, 1869
The Reverend Alexander Dyce :
South Kensington Museum Art Handbooks. The Dyce and Forster Collections. With Engravings and Facsimiles. Published for the Committee of Council on Education by Chapman and Hall, Limited, 193, Piccadilly, London. 1880. Chapter I. Biographical Sketch of Mr. Dyce. pp.1-12, including 'Portrait of Mr. Dyce' illustrated opposite p.1.

In 1771, Philippe Jacques de Loutherbourg, a successful Parisian artist, left the French capital for London. He was fleeing from his wife and the scandals their dissolute life had caused. With the help of the pyrotechnician Giovanni Battista Torré, he managed to impress Garrick with some scenery projects. Garrick had discovered the French methods of lighting and scenery painting during his trip to Paris in 1863-4 and was keen to adopt these practices in Drury Lane. Loutherbourg, with no previous experience of scenography, anxious to hide his past and to secure a long term job, deployed all his talents to successfully create the most ‘enchanting’ sets and effects for Garrick’s Christmas Tale in 1773. Hired as chief scene designer at Drury Lane Theatre with an annual salary of £500, he developed a broader use of successive background painted scenes as well as sound and
light effects.
Despite not yet being fully part of the staff, Loutherbourg certainly worked on the scenery of Garrick’s 1773 production –‘with great Alterations by Mr G.’ of John Fletcher’s The Chances. A successful play by the Jacobean playwriter John Fletcher (1579-1625) this situation comedy revolves around two Spanish gentlemen, John and Frederick, embroiled in an Italian family feud concerning a feminine beauty and a mysterious baby. Always keen to stage famous old plays, Garrick had first produced The Chances in 1754, playing the part of Don Juan. One of the many alterations that he made in 1773 was to set up the action not in Bologna but in Naples. Rather than depicting an action, Loutherbourg illustrates here Juan’s monologue on the consequences of his curiosity: ‘What I have got by this now? What’s the purchase? /A piece of evening arras-work, a child/ Indeed an infidel! this comes out of peeping!’. With his short and stout stature, Garrick is easily recognisable.
The first aim of this picture is to celebrate the scenery, as reflected in its title for the 1774 Exhibition at the Royal Academy : Mr. Garrick in the character of Don John, with a view of Naples by moon-light. Garrick, who had visited Naples in 1764, is indeed playing in front of the famous bay, with the Castell del’Ovo and typical felucas in the background. This scenery, completed on the left by another drop scene with a palazzo, goes further than a topographical setting by incorporating descriptive elements given by the playwright: ‘It is not so far night as I thought; for, see, /A fair house yet stands open [...]’. Garrick, holding the baby wrapped in a red blanket, stands out in the warm light of the door lantern that gives him a long shadow. His costume is in harmony with the colours of the moonlit twilight. This painting is a precious testimony of how Loutherbourg used a pictorial approach to reinforce theatrical illusion. [] 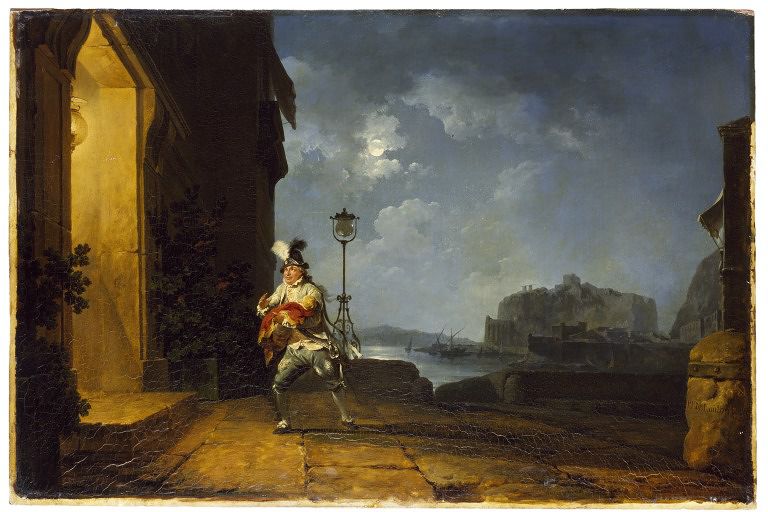