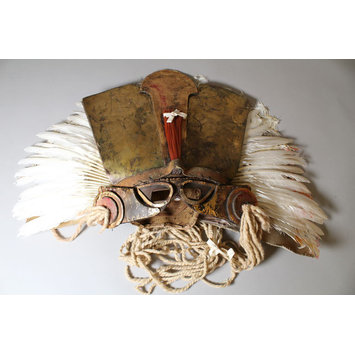 An Inca mask, designed by Michael Annals for the premiere of Peter Shaffer's epic play, The Royal Hunt of the Sun, by National Theatre Company in 1964. The play tells the story of the Spanish conquest of Peru and the death of the god-king, Atahuallpa. Michael Annals devised a spectacular staging, based on the emblem of the sun, and dressed the Incas in dazzling masks and headdresses. 'We drowned the stage with gold and feathers', said Shaffer. It was a triumph of design which established the 26-year-old Annals as a major talent.
The role of Atahuallpa was created by Robert Stephens, who wore this mask for his first appearance in the play. As the action moved to Peru, a huge metal disc at an upper level of the stage opened out to become a metallic sun, at the centre of which stood the masked figure of Atahuallpa, dressed in a flowing feathered cloak.
The mask was made by John Gunter, who went on to become a theatre designer himself. It is a good example of the ingenuity of the theatrical costume maker. From a distance the headdress looks like beaten copper, but it is, in fact, constructed from fibreboard covered in gold-painted leatherette.

Elaborate half mask, with tall headdress of fibreboard, hardboard and gold-painted leatherette and, to each side, a bold 'fan' of white feathers. At front, an attached panel with a curved top, rising above the main headdress, with, in front of this, a crest of plastic rods.. The eye piece extends beyond the face and from each side hang long wool ropes. The inside of the mask is padded with felt and foam rubber.

Atahuallpa was played by Robert Stephens in London and by David Carradine in New York.

Historical significance: A fortunate survival from a significant theatre production of the 1960s. Peter Shaffer's epic play was the newly established National Theatre Company's first premiere and a major triumph of direction and design. It established the career of Michael Annals, who went on to work extensively at the National Theatre and on Broadway, and conferred stardom upon Robert Stephens. 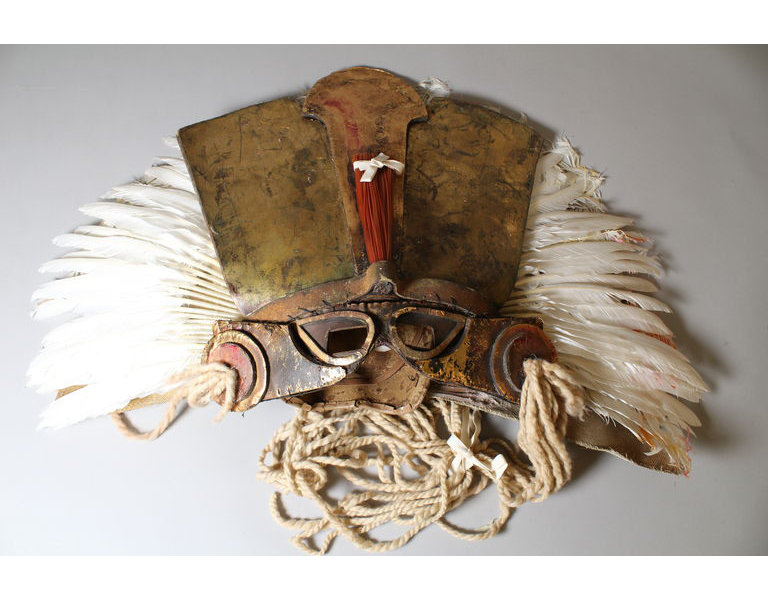