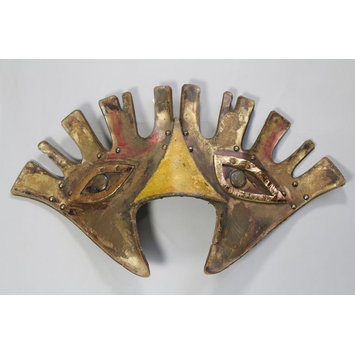 An Inca mask, designed by Michael Annals for the premiere of Peter Shaffer's epic play, The Royal Hunt of the Sun, by National Theatre Company in 1964. The play tells the story of the Spanish conquest of Peru and the death of the god-king, Atahuallpa. Michael Annals devised a spectacular staging, based on the emblem of the sun, and dressed the Incas in dazzling masks and headdresses. 'We drowned the stage with gold and feathers', said Shaffer. It was a triumph of design which established the 26-year-old Annals as a major talent.
This mask is a good example of the ingenuity of the theatrical costume maker. From a distance it appears to be made of beaten copper, but it is, in fact, constructed from fibreboard covered in painted leatherette and is decorated with metal upholstery studs.

High crested half mask with comb-like top, made from fibreboard covered in leatherette painted with gold, brown and black pigments to suggest beaten metal. The crest is decorated with two oval eye shapes in applied fibreboard covered in copper foil and with metal upholstery studs and pheasant feathers. A triangular decoration above the wearer's eyes has lost its leatherette covering. Eye piece missing. Attached to the reverse of the crest by metal clips are ten elastic strips to hold the feathers. Three pieces of black elastic, designed to fit over the wearer's head, are stapled to the reverse. 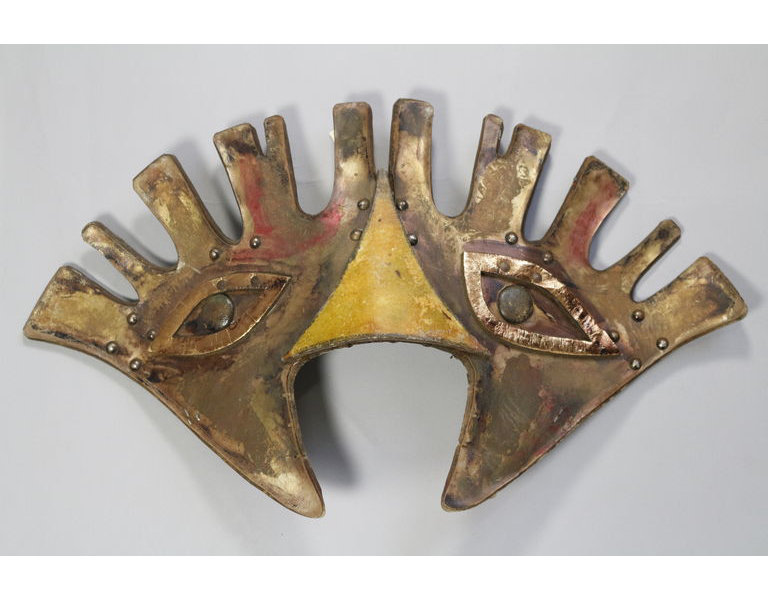