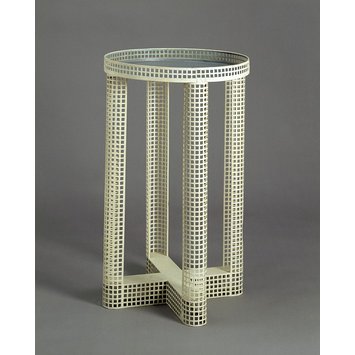 Metal furniture has been made since antiquity. However, the simple rectiliniarity and geometric purity of this table were strikingly novel when it was designed and produced by the Wiener Werkstätte in the early 1900s. Punched sheet metal, as used here, could by then be mass-produced on an industrial scale for use in small-scale furniture. The austerity of the material served to emphasise the form and function of the furniture into which it was made. The Wiener Werkstätte produced various types of tables and jardinères, but more elaborate pieces were ocasionally made, too.

Smoking table of enamelled zinc, with an all-over pattern of small square holes, the four semi-circular pillar supports joined by a cross stretcher at floor level and supporting a circular top with a pierced gallery. Enamelled white (re-finished).

The table base repeats the basic form of a jardinière visible in a 1904 photograph of the Wiener Werkstätte saleroom.

Small wares of white enamelled metal pierced with a repetitive pattern of small square holes were among the most characteristic products of the Wiener Werkstätte. They were used to illustrate articles by Jaumann (1905) and Lux (1908) in which the concept of a machine aesthetic was discussed. These tables were popular enough to be imitated by Beiszbarth & Hoffmann of Mannheim-Rheinau, who even employed Hoffmann's pupil, Otto Prutscher (1873 - 1959) as a designer.
Many of the Wiener Werkstätte products were small and simple, exhibiting geometric purity and strong rectilinarity. However, more ambitious objects were attempted, for instance a table by Hoffmann incorporating a jardinière and supporting a bird cage which was illustrated in about 1909.

A photograph in the Wiener Werkstätte records in the Österreichisches Museum für Angewandte Kunst (IX p.49, M 1408) shows this table model supporting small containers for cigars and cigarettes; according to the order book one unfinished table was made as a model for Clöter on February 2nd 1910, who supplied ten such tables, with glass tops, on October 12th 1910. 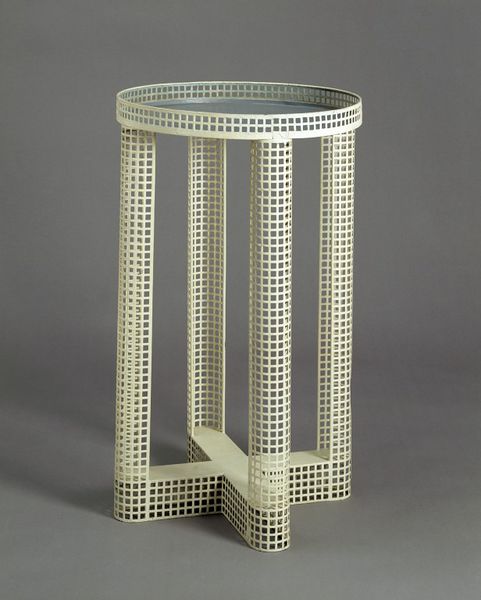