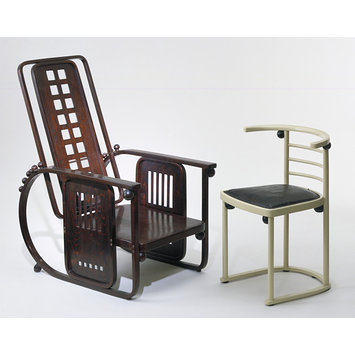 Hoffmann's chair was designed for the theatre cabaret 'Fledermaus' (the ‘Bat’) in Vienna in 1907. It was designed by the Wiener Werstätte, exclusive Viennese workshops co-founded by Hoffmann in 1903. Inspired by the Guild of Handicraft the English architect and designer C.R. Ashbee had set up in London, the workshops wanted to create good, simple design and new modern forms.

This chair model was supplied in both white with black balls -and vice versa- for the auditorium of the Fledermaus, an elegantly lit and decorated room featuring white plaster walls and grey Malpaquet marble panelling and parapets. This wider than deep space was arranged in a fashion that would allow the 300 spectators to be seated around tables and yet still be able to view the stage from every point in the room. The cabaret was conceived as a meeting place for the Viennese avant-garde and welcomed people like the Viennese interdisciplinary artist Oskar Kokoschka (1886–1980).

Critics of Hoffmann and the advanced school of Viennese design, also known as the Secessionist style, pointed out how uncomfortable the chair was to sit in. However, the design was popular and remained in production at Jacob & Josef Kohn until at least 1916. The chair was also produced by Thonet: it featured oval-shaped pieces at the joints, in contrast to the round spheres of the J. & J. Kohn version.

White-painted and bentwood beech chair, the plain turned legs joined by a rectangular-sectioned stretcher at floor level running continuously round sides and back. The rounded seat rails are supported at the front by two round ebonised balls as spandrel decoration. The back is formed by three turned cross rails, with a moulded and shaped top rail continuing beyond the back uprights to form the arms and supported by one ebonised ball on either side in the spandrels between toprail and back upright. Leather upholstery on seat, with nailing along the edge.

This chair, designed by Hoffmann for the Viennese theatre Kabarett Fledermaus in the Johannesgasse, was there finished in black with white balls and vice versa as in this example. Black chairs with white balls were also used as outside-seating at the Vienna 1908 Kunstschau exhibition. The Kabarett Fledermaus was opened in 1907 and conceived as a meeting place for the Viennese avant-garde and as a manifesto for the Wiener Werkstätte a group of designers working in the advanced style of the time. The latter issued a pamphlet on the project. Some writers pointed out that the Fledermaus chairs were particularly uncomfortable. Nevertheless, the chairs were popular and remained in production until at least 1916.

Designed for Hoffmann's Kabaret Fledermaus which opened in 1907 and became a meeting place for the Viennese avant-garde. 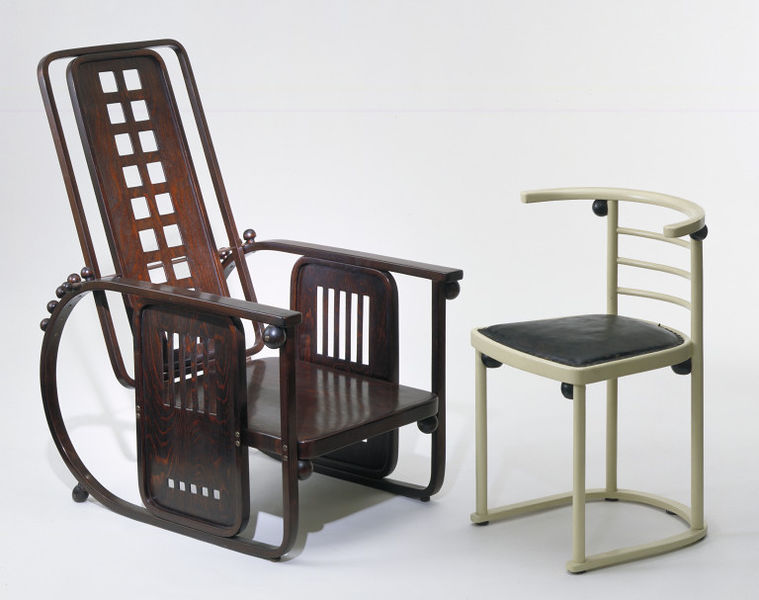