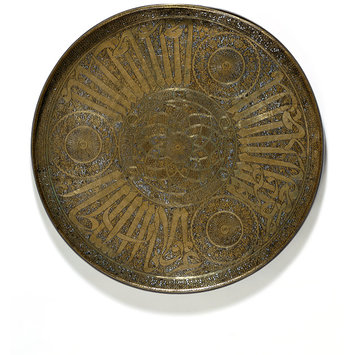 This tray is an outstanding example of Islamic art as it developed under the Mamluk dynasty in Egypt and Syria. Well-established techniques of metalwork were employed, such as inlaying silver into brass. But now these were used to create objects created with a new focus on spectacular inscriptions. These usually include the patron’s name and titles, along with laudatory phrases. The artists interspersed the inscriptions with abstract ornamentation, such as the roundels and central geometric pattern seen here.
The calligraphy of the tray is majestic. The inscription reads, ‘Glory to our lord the Sultan, the wise, the just, may his victory be glorious’.

Large shallow brass tray, with engraved decoration originally inlaid in gold and silver, most of which has been lost.

The tray is made of a copper alloy, most probably brass. It was hammered from sheet to form a flat, circular surface, to which a low, vertical rim was attached. The upper surface was engraved with a complex design, which was "inlaid" with gold and silver, most of which has been lost. The term "inlay" is conventionally used by art historians in the context of Islamic metalwork to describe a type of decoration that, in this case at least, probably involved the following procedure:

1. The surface of the brass was engraved with the design;
2. a black organic substance was used as infill in the areas where the gold or silver accents were to be placed; and
3. pieces of gold or silver foil, cut to shape, were stuck on to these filled areas, and the edges of the foil were then pushed down into lines already engraved in the brass.

The foil was held in place both by the black infill and by the way its edges were inserted into the engraved lines.

In its original condition, the overall effect of the decoration must have been magnificent, as almost the whole surface would have been covered with precious metal foil. It also seems that the details of the design were heightened by pushing the black organic infill into parts of the engraved design not overlaid with foil. To uninformed observers of such work, it would have appeared that the tray was inlaid with gold and silver rather than overlaid with foil over a black filler, and this is how the conventional description of "inlay" came about.

Glory to our lord the Sultan, the king, wise, diligent and just, who harries the enemy -- May his victories be glorified!
This is the inscription in huge letters that fills the outer register of the tray.

f
¿izz li mawlaanaa al-sulTaan al-malik al-naaSir al-¿aalim al-¿aamil al-¿aadil * al-ghaazii al-mujaahid al-muraabiT al-muthaaghir al-mu?ayyad al-manSuur naaSir al-dunyaa wa’l-d * iin qaatil al-kufara wa’l-mushrikiin muHyii al-¿adl fi ‘l-¿aalam[iin] abuu ’l-fuqar[aa?] * wa’l-masaakiin al-sulTaan al-malik al-manSuur naaSir al-dunyaa wa’l-diin
Glory to our lord the Sultan al-Malik al-Nasir, who is wise, diligent and just, who harries the enemy, ever engaging in Holy War, who is always at his station, ready to defend the frontiers, who has divine support and is granted victory, Nasir al-Dunya wa'l-Din, who slays the unbelievers and the idolaters, who revives justice among the inhabitants of the world, father of the poor and the indigent, Sultan al-Malik al-Mansur Nasir al-Dunya wa'l-Din.
Numerous splendid inscriptions form an important part of the decoration of this object. They consist of the same acclamation of the ruling sultan, repeated in many different versions. The longest version, given here, is written in four sections on the exterior of the vertical rim of the tray.

The many inscriptions in Arabic contain blessings for the reigning sultan. The largest script reads, ‘Glory to our lord the Sultan, the king, wise, diligent and just, who harries the enemy. May his victories be glorified.’

Three small coats-of-arms were later added to the design. They show that the tray had been exported to Venice by the 15th century.

The seven inscriptions contain blessings for the reigning sultan. The largest script reads, 'Glory to our lord the Sultan, the wise, the diligent, the just, the warlike king. May his victories be glorified.' Another mentions al-Malik al-Mansur, a title borne by two sultans who ruled in 1341 and 1361-3 respectively.

Engraved brass with traces of inlay in silver, gold and a black composition 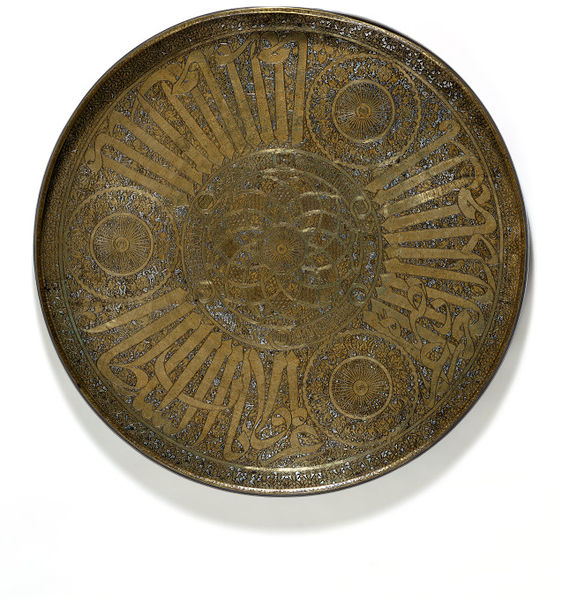