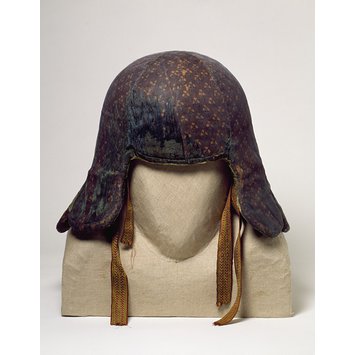 This helmet made of quilted fabric and lined with velvet belonged to Tipu Sultan, ruler of Mysore in South India (r. 1782-1799). It was taken from his palace after the Siege of Seringapatam, when the army of the East India Company defeated Mysore, and Tipu Sultan was killed. The helmet has an embroidered Persian inscription on the fabric inside, stating that it had been dipped in the waters of the Zamzam well at Mecca and was therefore deemed to be impenetrable. The helmet was presented to the Indian Museum in London 'by the besiegers of Seringapatam', and was transferred to the South Kensington Museum in 1879.

Very large quilted helmet with flaps at the sides and rear, composed of many layers of cotton quilted together. It is covered with dark green silk or satin, and lined with velvet of the same colour. On the inside of the rear flap an inscription is embroidered to the effect that it has been dipped in the holy well of Zam-Zam at Mecca, thus making it impenetrable.

Persian inscription to the effect that it has been dipped in the holy well of Zam-Zam at Mecca, thus making it impenetrable.
Persian; Inside rear flap; Embroidered

The helmet was taken at Seringapatam in 1799 at the siege, and presented to the Indian Museum 'by the besiegers of Seringapatam'. It was transferred to the South Kensington Museum in 1879.

Quilted helmet, of cotton covered with green velvet or satin, taken at the siege of Seringapatam in 1799, Mysore, late 18th century.

[]
The next 2 labels were edited by Susanna recently – I’ve just omitted the numbers for the new display]
CHARLES CORNWALLIS, 1st MARQUESS CORNWALLIS
Watercolour on ivory in a gilded metal frame
India
Probably by Samuel Andrews after John Smart
c. 1792

Lord Cornwallis led the English East India Company army in the third campaign against Tipu Sultan. The Mysore ruler surrendered and was forced to hand over nearly half his territory. To make sure that Tipu Sultan kept to the terms of the treaty he had signed, Cornwallis took two of the ruler’s sons hostage. Andrews and Smart both worked in India at the time of the British victory.

3518(IS)
Transferred from the Indian Museum
in 1879
This was one of Tipu Sultan’s personal helmets. It was taken from his palace in 1799 and exhibited at the Indian Museum in London. A Persian inscription embroidered on the inside states that the helmet had been dipped in the waters of the Zam Zam well at Mecca. It was believed that this would make it impenetrable [27/9/2013]

Transferred from the India Museum to South Kensington Museum in 1879 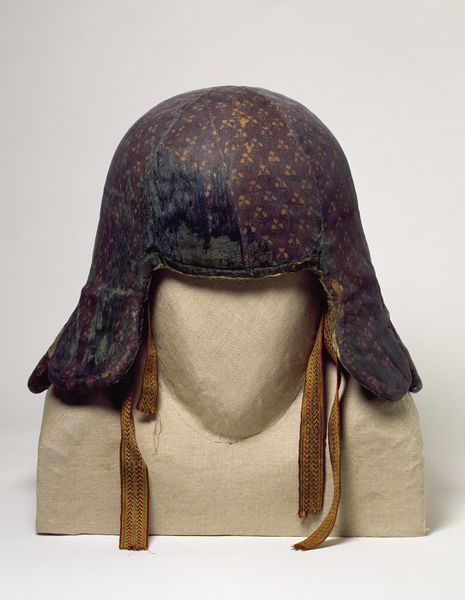