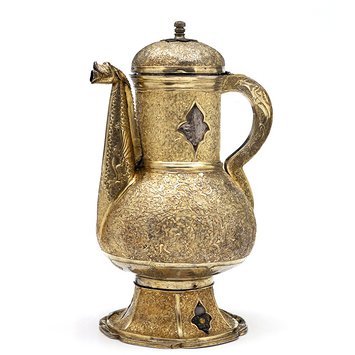 This ewer is a fascinating example of Turkish silverware influenced by European design. Most of the elaborate decoration is Islamic in character. But the overall shape and fabulous beasts on the handle and spout recall European ewers of an earlier period. The European models may have been acquired as loot and their shapes reproduced as a symbol of Ottoman power.

In the medieval period, there was a ready market in Christian-ruled Europe for luxury goods from the Islamic Middle East. These imports enjoyed such prestige that luxury goods made in Europe were often decorated in Islamic styles. Occasionally, as with this ewer, the influence went in the other direction and artists in the Middle East adapted European designs.

The shape of this ewer and the group of jugs to which it is related is based on late 15th century silver and/or gold inlaid Timurid brasses, several of which are in Istanbul museums. Most of these pieces must have arrived in the court after the conquest of Tabriz, either brought by Bedi uz-Zaman, the last sultan of Herat, or taken as booty from the Safavids. The same shape was previously used on a jade vessel made for Ulugh Bey in the second quarter of the 15th century as well as on early 16th century Safavid objects, including several inlaid brasses and a unique gold-inlaid black stone piece made for Ismail and brought from Tabriz by Selim I. Although the shape of Ottoman jugs, and this ewer, point to western Asian prototypes, the techniques of production and decoration reflect another source, that of eastern Europe. These features must have been transmitted by artists recorded in the payroll registers as having originated from Bosnia and other parts of the Balkans, who applied their native techniques to produce Islamic shapes and decorated these objects with the style formulated in the Ottoman court.

In this unique example of Turkish silverware, most of the decoration is Islamic in character. But the overall shape and fabulous beasts on the handle and spout recall European ewers of an earlier period. The European models may have been acquired as loot, and their shapes reproduced as a symbol of Ottoman power. 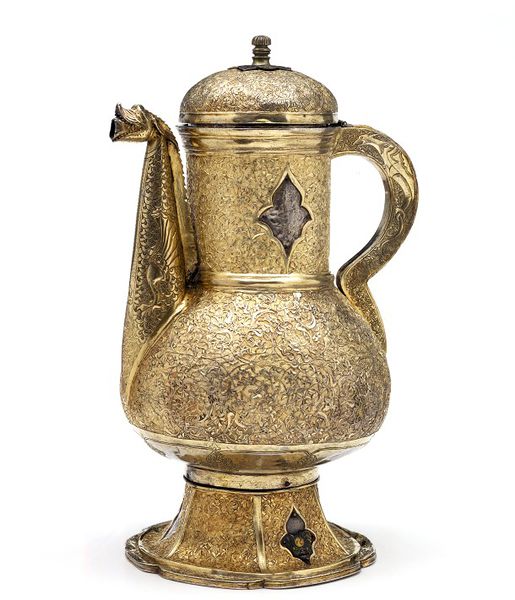