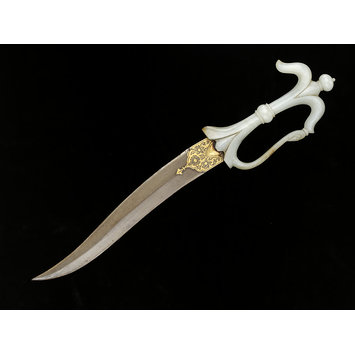 This dagger has a hilt made of nephrite jade which was probably made within the Mughal empire in the late 17th or early 18th century. It has a later watered steel blade with gold overlaid decoration that was probably added in Lahore in the early 19th century. The dagger was given to the Indian Museum by Maharaja Gulab Singh, the Hindu ruler of Jammu who was once a loyal member of the court of the Sikh ruler Maharaja Ranjit Singh. After Ranjit Singh's death in 1839, Gulab Singh sided with the British in the Anglo-Sikh wars and became ruler of Kashmir as well.

A dagger and sheath.
The dagger has a pointed and doubly-curved blade, double-edged, watered steel blade that has overlaid gold at the hilt in a flower and leaf design.
The dagger hilt has been fashioned in pale greenish grey nephrite jade. The main part of the hilt consists of a central shaft with an almost square cross section with a roundel in the middle. At the pommel end, two recurved sections emerge from either side of the shaft which then continues for a short distance before ending in a bead-like terminal. On the blade side of the roundel, the shaft widens and a stem emerges and turns backwards to join one of the recurved sections from behind, forming a knuckle guard, with the junction being carved and pierced as a drooping flower bud.
The sheath has been fashioned in green velvet with gilt mounts, gold cord and tassles.

Mughal empire (Hilt, made)
Lahore (Blade, made)
Kashmir (Sheath, made)

Presented to the Indian Museum by Maharaja Gulab Singh of Jammu and Kashmir. It was subsequently transferred to the South Kensington Museum (later renamed the Victoria & Albert Museum) in 1879.

p.144
Egerton, Wilbraham, An illustrated handbook of Indian arms; being a classified and descriptive catalogue of the arms exhibited at the India museum: with an introductory sketch of the military history of India, London, 1880
p. 230, cat. no. 1190
The art of India and Pakistan, a commemorative catalogue of the exhibition held at the Royal Academy of Arts, London, 1947-8. Edited by Sir Leigh Ashton. London: Faber and Faber, [1950]
Lord Egerton of Tatton, Indian and Oriental Armour, London, 1896, p. 144, Cat. No. 760 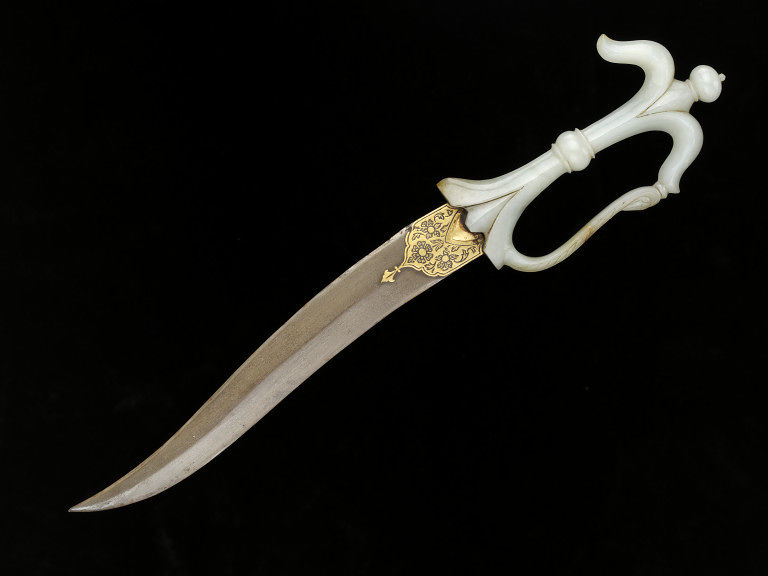