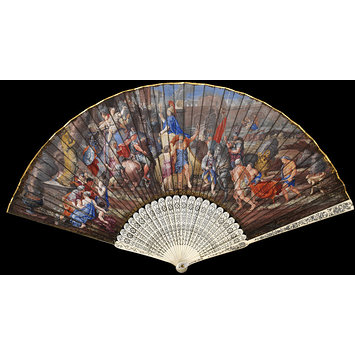 Louis XIV had the great events of his life and reign commemorated in many ways, including paintings, sculpture, tapestries and medals. Depictions of his gloire extended to the delicate and more ephemeral form of fans.

This fan illustrates the ‘Triumph of Alexander’, the moment in 331BC when Alexander the Great entered Babylon, having defeated the Persian King Darius III. From early in his reign Louis had been identified with Alexander the Great, an historical figure of legendary proportions. Louis considered himself to be a second Alexander and was keen to be portrayed as such.

The design on the fan is taken from one of a set of five paintings Charles Le Brun created for Louis XIV between 1661 and 1668. The fan painter has cleverly adapted the composition of the original painting, shifting the groups of figures slightly so that the scene fits the curved shape of the leaf. The fan shows Alexander as portrayed by Le Brun but his red and gold cloak has been replaced with one of strong cobalt blue, the colour closely associated with the French monarchy. Other details relate the scene more closely to Louis’ court; the large perfume burner, on the right, is typical of those used at his court and the detail of the large metallic urn being carried on a stretcher echoes those found in other tapestries, notably that commemorating Louis’ visit to the Gobelins factory in 1667 (in the Châteaux de Versailles et de Trianon).

Folding fan with a leaf of vellum painted in watercolours with a scene depicting Alexander's entry into Babylon. The sticks and guards are made of ivory. The end sticks are decorated with silver piqué work, setting patterns of tiny silver nails or dots into the ivory. The reverse of the fan leaf is painted with flowers.

The main design is taken from one of a set of five paintings Charles Le Brun created for Louis XIV between 1661 and 1668. The fan painter has adapted the composition of the painting, shifting the groups of figures slightly so that the scene fits the curved shape of the leaf. Other adaptations made to Le Brun’s design are that the red and gold cloak worn by Alexander has been painted cobalt blue and his golden helmet is crowned with red plumes.

The fan shows Alexander, holding a sceptre topped by Victory, standing in a chariot drawn by an elephant covered by a decorative blue textile. He is accompanied by a number of different figures, including three men on horseback and two men on foot carrying a large metallic urn on a stretcher. To the left of the foreground stands a golden statue of Semiramis and in the background the terraces of the Hanging Gardens of Babylon can be seen.

Gouache on vellum, with carved and pierced ivory sticks, and carved ivory guards with silver piqué and mother-of-pearl

The scene painted on this fan is described as 'The Triumph of Alexander', and shows specifically his entry into Babylon. It is taken from one of a set of five paintings on the History of Alexander executed between 1661 and 1668 by Charles Le Brun for Louis XIV. This fan painting is almost an identical copy of the original by Le Brun in the Louvre. The artist has clevely adapted the composition to fit the curved shape of the fan leaf by shifting the groups of figures slightly and introducing a completely new group in the centre foreground, in front of Alexander's chariot.

From quite early in his reign, Louis XIV had been identified with Alexander the Great. In 1665, in Benserade's 'Ballet royal pour la naissance de Venus' he took the role of Alexander, as he did in Racine's tragedy about the same monarch. Rachine's dedication of his play to the King, extolling Louis' virtues as far superior to Alexander's, would today be regarded as sycophantic in the extreme, but was completely acceptable to Louis. This fan is adapted more or less directly from the series of 'Alexander paintings commissioned by Louis from Le Brun. In 1664, when Le Brun became director of the Gobelins factory, the first set of tapestries to be commissioned for the King adapted these paintings. The series soon became popular and was copied by other factories all over Europe.

The main design is taken from one of a set of five paintings Charles Le Brun created for Louis XIV between 1661 and 1668. The fan painter has adapted the composition of the painting, shifting the groups of figures slightly so that the scene fits the curved shape of the leaf. 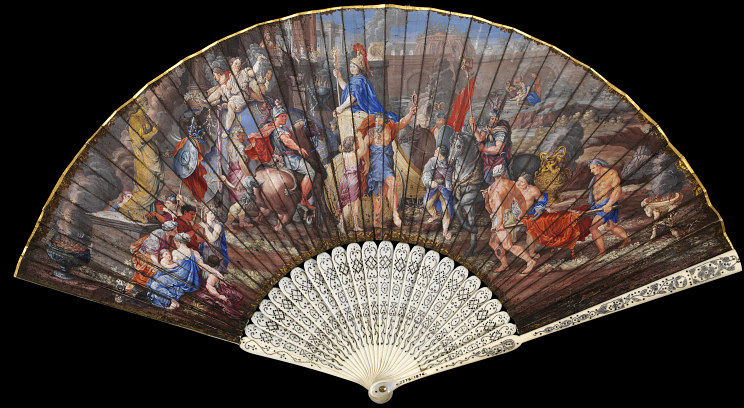