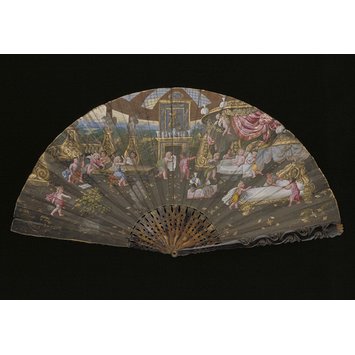 The Toilette of Cupid

This is a folding fan with a pleated, decorated leaf made of vellum attached to a set of carved sticks made of tortoiseshell. A fan was an essential accessory in the formal dress of a wealthy woman. The subject of the design on this fan is ‘the toilette’, which describes the process of getting dressed and preparing a persons appearance. This was a popular subject for a fan leaf in the late 17th century.

The design shows a large and opulent chamber opening on one side onto a view of a distant landscape. Within the richly furnished room, a number of putti are serving Cupid as he bathes, with three other putti preparing a couch for him to later relax upon. The opulent interior exemplifies the contemporary association between love and luxury. The scene combines elements such as music, food and flowers, making clear reference to ‘the five senses’, which was a popular decorative theme at this time. The scene in fact resembles a series of paintings by Jan Brueghel the Elder on the theme of the five senses, painted in 1618.

Certain aspects of the design suggest that it almost certainly celebrates the Appartement des Bains at Versailles. For example; the statues shown in the fan are very reminiscent of the designs by Le Brun, said to have been in the Octagon Room of the Appartement des Bains. They are here placed on supports typical of those used at Versailles. The opulent bathroom at Versailles may have been partially inspired by the splendid bathroom that Louis XIV's mother, Anne of Austria, owned in the Louvre which, because it was a novelty at the time, could have made a great impression on her son.

Madame de Montespan, the 'maîtresse en titre' (chief mistress) of Louis XIV, was given the Appartement des Bains as her living-quarters after her fall from favour in 1684, it having first been stripped of many of the furnishings. In 1691 she was then made to vacate the apartment in favour of the duc du Maine, her son by Louis.

Fan with leaf of brown vellum painted in watercolours. The scene shows an imaginary interior furnished in the Baroque style. The main items of furniture consist of bed and a bath, each with its own canopy, and a harpsichord. Occupying the centre of the room is fireplace and an overmantle furnished with blue and white vases and a painting of cupid. Cupid is aiming his dart at the occupant of the bath, who is assisted by a number of almost identical attendants. Cupid is engaged in preparing his bed and bath whilst others entertain him with music. The room has no walls and overlooks a wooded landscape. The elliptical roof is supported by a series of decorative, but erratically placed, pillars.

The painting style is simple, but detailed in its execution, providing a useful illustration of an seventeenth century bedroom and bathing ceremony. All the figures have the same physical appearance, being small, chubby and childlike.

The reverse is painted with three bunches of roses, spaced across the middle of the leaf within a broad border that repeats the shape of the fan leaf. The border is decorated with a repeated design of flowers and formal leaf patterns.

The sticks have not been over painted to conform with the flower paintings but each one is decorated with a hastily painted undulating line or squiggle; a form of decoration for sticks that is not uncommon on early fans. The sticks and guards are of pierced and carved tortoiseshell. The gorge is painted with a palmette motif. The guards are carved with a serpentine design and taper towards the pivot where the metal rivet is a hollow tube, presumably to accommodate a ribbon to hold the fan by.

Gouche on leather, with carved and pierced tortoiseshell sticks and guards with metal rivet

Louis XIV's mother, Anne of Austria, owned a splendid bathroom in the Louvre which, because it was a novelty at the time, may have made a great impression on her son in terms of bathroom design at Versailles.

Madame de Montespan, the 'maîtresse en titre' (chief mistress) of Louis XIV, was given the Appartement des Bains as her living-quarters after her fall from favour in 1684, it having first been stripped of many of the furnishings. In 1691 she was then made to vacate the apartment in favour of the duc du Maine, her son by Louis.

Fan, The Toilette of Cupid, leaf of vellum painted in watercolours with sticks and guards of pierced and carved tortoiseshell, France, 1670-80

Cowen, Pamela, A Fanfare for the Sun King: unfolding fans for Louis XIV, London: The Fan Museum Greenwich, in association with Third Millennium Publishing, 2003.
Hart, A. & Taylor, E. Fans. London: V&A Publications, 1998, p17 ill. Plate 4
'80 A FAN, the black leaf painted with putti attending to the toilet of a prince, the reverse with bunches of flowers, the tortoiseshell sticks carved and pierced - 12in., North European, late 17th century.'
Catalogue entry for the auction at Christies South Kensington, 4th May 1978 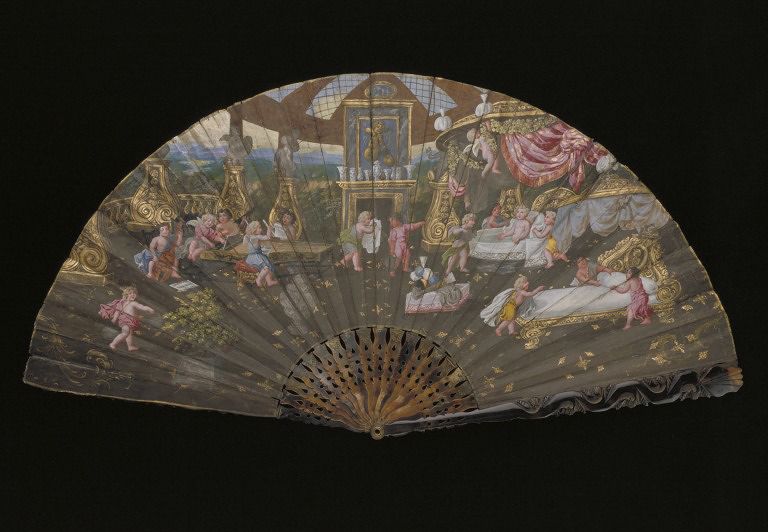