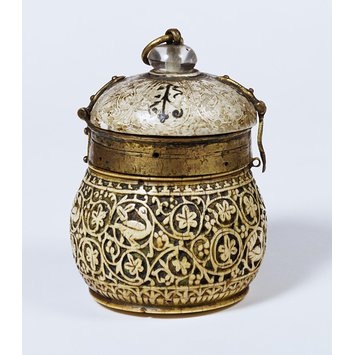 The body of this container is one of the earliest Islamic ivories to survive. Small birds perch in a grapevine, a design inherited from the pre-Islamic period. The vine scrollwork covers the whole available surface.

The circular box is carved from one piece of ivory, and shaped like the lower half of a gourd. The carved decoration, which has a flat outer surface, consists of five-lobed vine leaves enclosed within the spiralling tendrils of the vines, which originate from small vases. The vine scroll is inhabited by three birds. The background of the ivory carving was painted at some point in its history. A wide band of plain ivory at the neck is encircled by a gilded metal band (copper with applied mercury gilding). The lid is beech wood, decorated in gesso with red (vermilion) and blue (azurite) pigments, and gold leaf. The design is divided into eight compartments, each containing an abstract vegetal motif. The spherical rock crystal knob is pierced by a metal spike which terminates in a ring. The lid and metal mounts are of a later, as yet unspecified date. They had obviously experienced substantial wear before the object's acquisition by the Museum in 1866.

The Museum acquired this piece in London from Mr H. Durlacher for £25.

Historical significance: This is one of only three such ivories to survive intact, and provides an important example of ivory-carving of the early Abbasid period.

This box was published by Ernst Kühnel (1971), cat.no.2, along with two similar cylindrical boxes in the Museum für Islamische Kunst in Berlin (cat.no.1) and the private collection of the Marquis Hubert de Ganay (cat.no.3, present whereabouts unknown). The V&A's Sculpture Department registers mention another formerly in the Bourgeois Collection (Sale, Cologne, 1904, no.1053). The dimensions of the two other examples published by Kühnel are significantly smaller than the V&A box (heights of 9.5 and 8.5 cm respectively, compared to 14 cm), but their decoration is very similar. They all share a flat carving style, and a decoration of five-lobed vine leaves enclosed within spiralling tendrils, which originate from small vases. The V&A box is the only one of the group to feature any figural decoration (three birds).

However, this type of ornament continued under the Abbasids, who came to power in Iraq in 750. Examples of early Abbasid ornament - such as three wooden doors in the Benaki Museum in Athens - are very similar to the vine scrolls seen on this ivory. The style of the leaves has already become less naturalistic, showing the influence of pre-Islamic Persian art, which began a trend in Abbasid art towards more abstract forms. This abstract style really began with the construction of the first palaces at Samarra (in northern Iraq) in the 830s.

Circular ivory box with wooden lid and gilded metal mounts; Syria or Egypt, 8th-9th centuries, though the lid and mounts are of a much later date.

The body of this container is one of the earliest Islamic ivories to survive. Small birds perch in a grapevine, a design inherited from the pre-Islamic period. The vine scrollwork covers the whole available surface. 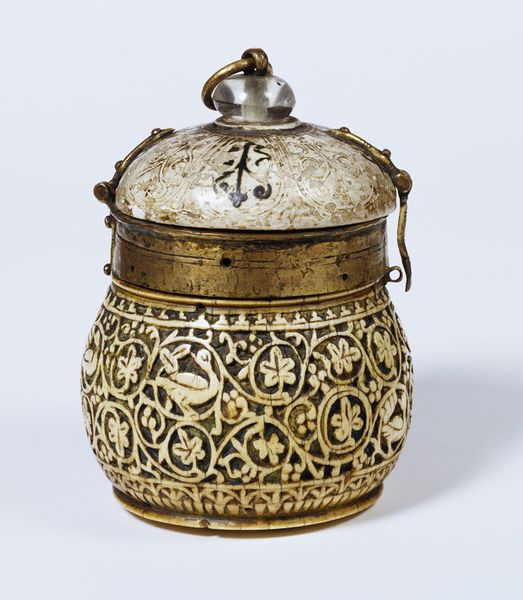