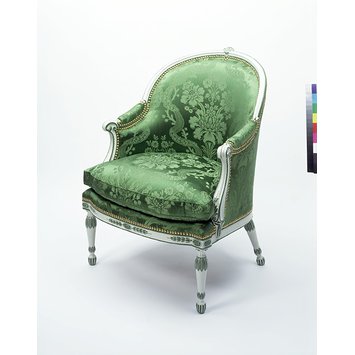 Object Type
'Bergère' was the term given to a new form of winged armchair that was developed in France in about 1725. It was designed to be particularly comfortable, with a long seat and a sloping back. The French term was anglicised as 'burjair' by the London cabinet-makers William Ince and John Mayhew in their Universal System of Household Furniture (1759-1762). Examples are illustrated on plate 40 of that publication. Thomas Chippendale (1718-1779) tightened the Ince and Mayhew design to make a more elegant chair for a drawing room, which, with its generous cushion stuffed with feathers, was still very comfortable.

Places
This chair was made for the Drawing Room in David Garrick's London house, which formed part of the Adelphi development designed by the Adam brothers. The inventory compiled at the time of Garrick's death in 1779 lists in the Drawing Room the full set of seating furniture to which this chair belongs. It consisted of 12 cabriole elbow chairs, four further chairs, a sofa and two 'Berjaires with Down Cushions'. They were all decorated to match in green and white and covered with green silk damask with green serge cases to protect the damask. The carpet, woven at Moorfields, was also green and white. The ceiling from the Drawing Room, painted to the designs of the architect Robert Adam, is also in the V&A.

This bergère chair has a moulded arched back with a honeysuckle finial, which sweeps down to the upholstered arm pads. Forward of each arm pad there is an inverted kidney shape, with beaded spine, which links the arm to an S shaped upright, which springs from a bud-shaped ornament on the side rail. The front borders of the uprights scroll inwards at the base and support honey-suckle and husk decoration. The centre of the curved front and the blocks at the top of the legs have oval rosettes with beaded frames and tapering husks. The baluster front legs are decorated with beading and a band of smooth leaves at the top and the bottom of the main shaft. The raking back legs are carved in a similar manner. They have oval reeded feet.

This chair was made in the London workshops of Thomas Chippendale (born in Otley, West Yorkshire, 1718, died in London, 1779) for the drawing room of David Garrick's London house, No. 5 Royal Adelphi Terrace. It has been re-upholstered twice since entering the Museum. A second bergere is in the collections of Bolling Hall, Bradford. The original set consisted of 12 armchairs and the two bergeres, supplied by Chippendale in 1772, with four further armchairs supplied the later in the same year.

Am armchair from the same set was offered for sale in 2018 by Ronald Phillips Ltd, London and illustrated in the catalogue of their exhibition The Legacy of Thomas Chippendale, no. 12, pp. 64-71. According to this, the armchair offered was carefully conserved and the original colouring of white motifs on a green ground re-instated, in contrast to the colour scheme of green motifs on a white ground that was conjectured for the V&A bergere when it came into the Museum collections in 1977.

One of a set of chairs supplied by Chippendale for the drawing room of David Garrick's house, No.6, Adelphi Terrace, London. [Unknown]
One of a set of chairs supplied for the drawing-room of David Garrick's London house. The chair has been repainted and re-upholstered to match its original appearance. Green silk damask was also used for the curtains and to line the walls of the drawing room. [1996]
British Galleries:
'Bergère' is a French term for an upholstered armchair. Chippendale visited France in 1768 and then expanded production to include new French forms of furniture. This chair was supplied by Chippendale to the actor, David Garrick, and his wife, who were among Chippendale's most fashionable clients. It was made for the Garricks' London house in the Adelphi development, just off the Strand. [27/03/2003] 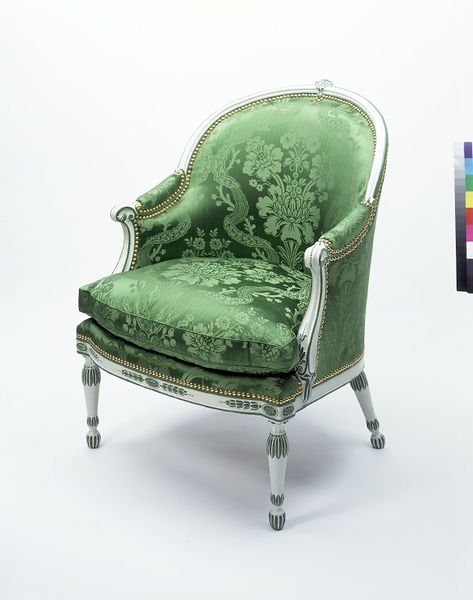