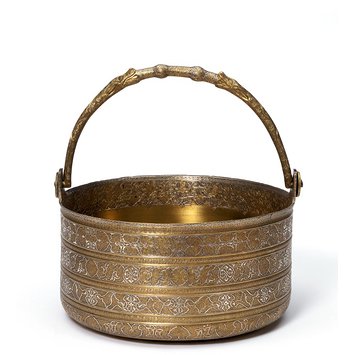 This brass bucket has been overlaid with silver to give it added prestige. It has an Arabic signature inside the flanges for the handle. It states that the bucket was decorated by Zayn al-Din, whose signature is found on several other pieces in the same style.

This type of richly decorated so-called ‘Veneto-Saracenic’ metalwork was once thought to have been made by Arabs living in Venice. It is now known that it was originally produced in Egypt or Syria, and only later copied in Italy.

In the medieval period, there was a ready market in Christian-ruled Europe for luxury goods from the Islamic Middle East. These imports enjoyed such prestige that luxury goods made in Europe were often decorated in Islamic styles. By the late 15th century, when this piece was made, intense trade across the Mediterranean makes the lines of influence difficult to unravel.

Brass bucket with handle, spun, chased all over with floral designs and partly overlaid with silver. Signed inside the flanges for the handle by Zayn al-Din.

The shape of this bucket, with its straight walls and bail handle, bears similarities to Islamic examples dating back to the eighth century. A related shape with a more rounded body and at times a high splayed foot was fashionable in Iran during the twelfth and thirteenth centuries. The earliest dated example of the latter type is the celebrated Bobrinsky Kettle made in 1163. At least six other Veneto-Islamic buckets are known to exist, one of them is signed by Mahmud al-Kurdi.

There is ongoing debate as to the provenance of what are known as Veneto-Saracenic wares. Trays, bowls, buckets, handwarmers and penboxes feature superimposed scrolls, one creating well-defined units and the other forming the background as their main characteristic. About thirty of these pieces bear the names of Muslim artists, including Muhammad, Muhammad Badr, Qasim, Umar, and Zayn al-Din. Some scholars feel the style was initiated by Timurid artists who immigrated to Venice at the end of the fifteenth century; while others point to the Mamluk tradition of Egypt and Syria as its source. Specific motifs seen on Veneto-Islamic pieces are related more closely to late Mamluk metalwork, and several bear the same Arabic inscriptions. Venetian metalworkers also worked in the Islamic tradition, calling themselves "al-Azzimina", after the Arabic word "al-ajam", meaning non-Arab.

Brass bucket, made in southern Germany or northern Italy, with decoration added in Egypt or Syria and signed by Zayn al-Din, 1475-1550.

An Arabic signature inside the flanges for the handle states that the bucket was decorated by Zayn al-Din. This craftsman signed several other pieces in the same style, which is similar to that of Mahmud al-Kurdi. Both used silver wire sparingly. The wire was not inlaid, but was hammered flat over a ridge of brass, the surface of which had been roughened.

Museum no. 1826-1888 [Jameel Gallery]
BUCKET
Engraved gilt bronze inlaid with silver
ITALIAN (Venice); about 1500
From the collection of Octavius Morgan
The bucket is engraved with the name of the maker Sain ad-Din, an Islamic craftsman who worked for Venetian patrons. A number of wares signed by this artist are recorded, some of which have been prominent in Italian collections for many centuries. [Used until 06/2004] 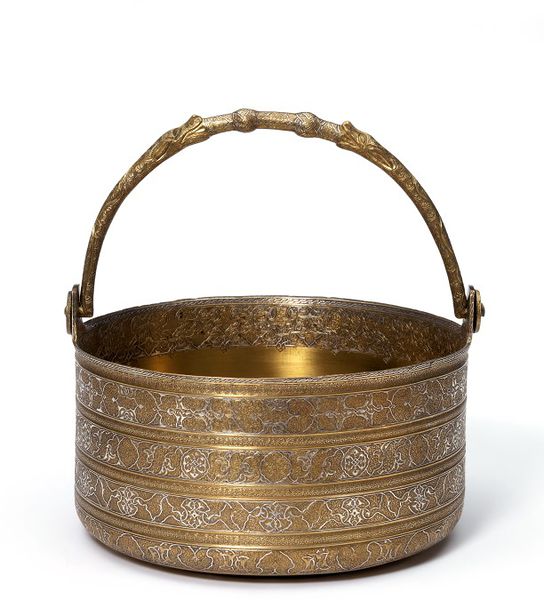