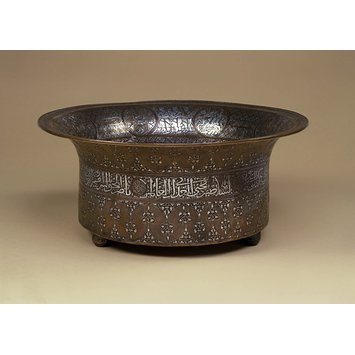 In the medallions on the rim of this basin, horse riders alternate with figures representing the moon. Between the medallions are groups of marching soldiers and animated inscriptions. The real and fantastical animals include ducks that chase one another in and out of the script. The Arabic inscriptions contain elaborate but anonymous royal titles and good wishes for the owner.

This type of secular decoration shows that this basin was a domestic object made for a palace rather than a religious building. It is an example of the distinctive dynastic style that developed during the first century of Mamluk rule in Egypt and Syria (1250–1350). This was when the sultanate was at the height of its power.

At first, scenes with human figures were common. These disappeared after 1300, and elegant inscriptions in Arabic became more prominent. The texts all name the patron or glorify the sultan.

dedication
Glory to our master, the king, the royal, the learned, the just, the defender [of the faith], the champion [of Islam], the warrior [of the frontiers], the protector [of the frontiers], pillar of Islam and of Muslims, protector of the weak and the paupers, crowns of kings and sultans, reviver of justice among all, defender of truth and proof, and glory and prosperity to the owner.
Arabic; Thuluth; six panels on exterior.

dedication
Perpetual glory and prosperity and long life to you, the master [of] great fame. Happiness and good fortune and glory... prolonging and superabundance and goodness. You are he whose orders kings obey and at whose approach the bereaved rejoice.
Arabic; Thuluth; Four bands on rim

dedication
Perpetual glory and prosperity to you, the master [of] great fame, eternal happiness, long life to the owner.
Arabic; Thuluth; Four bands on inner walls

This basin appears as pl. 4 on p. 123 of Marco Spallanzani's Metalli islamici a Firenze nel Renascimento (Florence, 2010), where it is labelled "Gia' Roma, Collezione Doria Pamphilj". He gives the evidence for the link with the Doria Pamphilj family on p. 78, referring to M. Lanci, Trattato delle simboliche rappresentanze arabiche (Paris, 1845-6), pl. XXVIII.

This is one of a group of impressively large basins with slightly flaring sides and wide everted rims produced by Ayyubid and Mamluk metalworkers. Aquired by the museum in 1898, the remarkable preservation of silver inlay with very few large pieces lost on the body, suggests that the basin was cherished and carefully handled to preserve its decoration. This basin, whose shape is typical, has an unusual decorative programme and, in conrast to other examples, rests on three feet. Varied decorative themes appear inside the rim, while a subdued design with bold inscriptions adorns the exterior. The interior features complex interlacing patterns and arabesque motifs amongst which a series of medallions feature mounted riders galloping and shooting, alternating with lunar figures. Between the medallions are groups of standing figures bearing arms and animated inscriptions with real and fantastical animals, including wild ducks, chasing one another in and out of the script. As a whole, the inscriptions are ambiguous, omitting the words "al-sultan", which is standard on imperial dedications, but include several other royal benedictions, and conclude with the phrase "to the owner", suggesting that the piece was made for an anonymous patron.

In the medallions on the rim, horse riders alternate with figures representing the moon. Between the medallions are groups of marching soldiers and animated inscriptions. The real and fantastical animals include ducks that chase one another in and out of the script. The Arabic inscriptions contain elaborate but anonymous royal titles and good wishes for the owner.

Brass inlaid with silver and a black composition 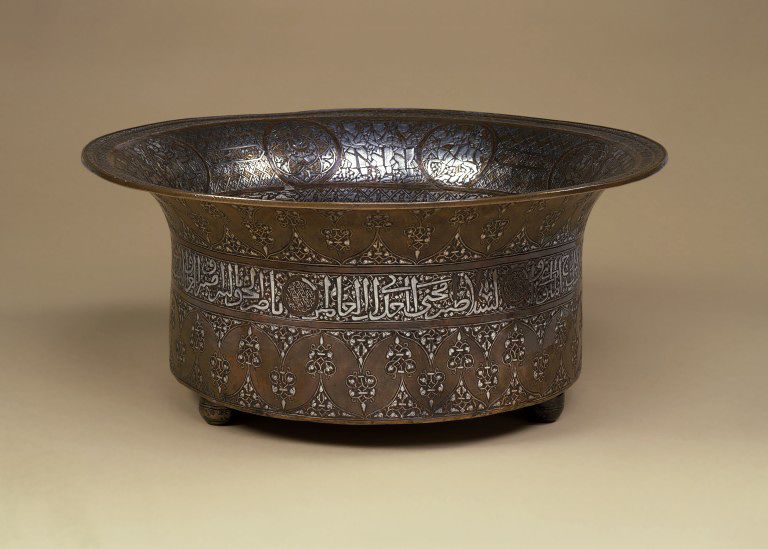