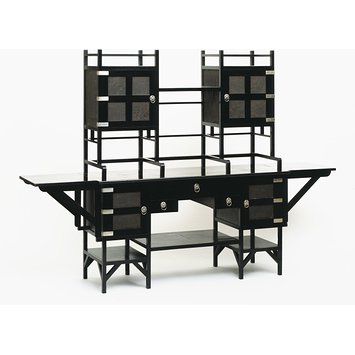 Object Type
This sideboard is stylish and dramatic, but it is also quite appropriate for use in a dining room. It is functional with drawers, adjustable shelves, and a rack fitted to take a large dish between the cupboards. The construction and finish are practical and hygenic, with hard surfaces and simple decoration, and the raised bottom shelf gives access for cleaning the floor.

Materials & Making
E.W. Godwin designed the first version of this sideboard in ebonised deal, a cheap wood, in 1867. He subsequently changed to ebonised mahogany as he found deal to be unstable. At least ten versions of the original were made between 1867 and 1888, with differences in design, decoration or in the number of legs. There are several surviving examples of this sideboard, made of ebonised deal, mahogany, or oak and pine.

Ownership & Use
The original sideboard was designed by Godwin for the dining room of his London home in 1867. Another example was made for the Red House, Wheathampstead, Hertfordshire, the home that Godwin shared with the actress, Ellen Terry from 1868 to 1875. She subsequently used the sideboard in the dining room of her own house in London. Original owners of other sideboards in the same style also included the dramatist and art critic, Joseph Comyns Carr, the writers, Wilfred and Alice Meynell, and the architect, Frederick Jameson, whose daughter, Mrs. Hartree, sold this example to the Museum.

The sideboard originally belonged to Frederick Jameson, translater of Wagner and friend of Meredith (with whom he shared a house), Whistler and many other artists and architects. The museum acquired it from his daughter Evelyn Hartree.
Designed by Edward William Godwin (born in Bristol, 1833, died in London, 1886); made by William Watt & Co., London

Historical significance: This sideboard is today one of the most famous pieces of nineteenth century furniture. Its stark geometric form and plain ebonised surfaces have appealed greatly to Modernists throughout the twentieth century. The original version was designed by the architect E.W. Godwin in 1867 for himself. It epitomises the influence of Japanese art and design on British decorative art in the 1860s and 1870s.
A version of the sideboard was made in ebonised deal for Godwin's dining room. He wrote of it, 'Such effect as I wanted I endeavoured to gain, as in an economical building, by the mere grouping of solid and void and by a more or less broken outline.' ['My chambers, and what I did to them. Chapter 1. A.D. 1867', The Architect, Vol.XVI, 1 July 1876, pp.4-5]
The success of Godwin's buffet is demonstrated by the number of examples which survive, all slightly different with varying numbers of legs. There are seven ebonised sideboards and one ebonised example without top cupboards, and one sideboard in oak and pine. The ebonised sideboard, from Ellen Terry's collection and now in Bristol Museum and Art Gallery, may be the example he designed about 1867 for their home in Hertfordshire.

CABINET
ENGLISH: 1877-1880
Designed by E.W. Godwin (1833-1886)
Probably made by William Watt, London
Ebonized mahogany with silver plated fittings and leather paper
This piece along with other furniture in the Anglo-Japanese style designed by Godwin, appeared in 1877 in a catalogue entitled Art Furniture published by the cabinet maker William Watt. It is probably the best known piece in this syle but has been wrongly dated to 1867. At least six cabinets of this design are known to survive and the six-legged version in Bristol Museum is known have belonged to Ellen Terry, the actress, with whom Godwin lived between 1868 and 1875. [1993]
SIDEBOARD, ebonised wood with silver-plated fittings and inset panels of 'embossed leather' paper. Designed by E.W. Godwin (1833-1886). Made by William Watt about 1877. [pre October 2000]
British Galleries:
This sideboard is one of the most famous pieces of furniture designed by E.W. Godwin. The geometric form, ebonised finish and what Godwin called the 'grouping of solid and void' all come from the designer's study of Japanese artistic principles. Japanese embossed leather paper has been used in the doors. [27/03/2003]

Godwin originally designed a sideboard in ebonised deal for his dining room in London in 1867 which he subsequently changed for an ebonised mahogany version, as described in his article in Architect (July 1,1876) pp. 4-5. This ebonised mahogany example is probably the one now in the Bristol Museum and Art Gallery and came from the collection of Ellen Terry who lived with Godwin 1868-1875. Godwin's ledger of 1867-8 (Archive of Art and Design AAD 4/508-1988) lists an ebonised deal sideboard he designed for the Art Furniture Company, a short-lived enterprise in which he may have been involved. The V&A sideboard is one of six surviving complete sideboards, which vary in details of construction and decoration, and there are also two surviving lower sections. It is not possible to clarify the chronological sequence for these examples because of the inconclusive evidence about their manufacture and lack of provenance. Although the sideboard was illustrated in William Watt's trade catalogue Art Furniture (London, 1877) plate 6, unauthorised copies of Godwin's designs were available, as mentioned in his preface of Art Furniture and might explain the different versions of the sideboard. He also designed furniture for other firms including Collinson & Lock, London, who employed him from 1872 for about three years. The V&A sideboard was thought to date from the late 1870s because of its eight legs and Japanese leather paper panels which were not thought to be available in London before the opening of Libertys in 1875. However Japanese papers exhibited in the 1862 International Exhibition were available for sale after the Exhibition closed and specialist dealers in London supplied such papers in the late 1860s. The argument about the eight-legged version being later cannot be substantiated either. It is therefore suggested that the V&A sideboard could have been made in the late 1860s rather than in the late 1870s but this remains to be proved. 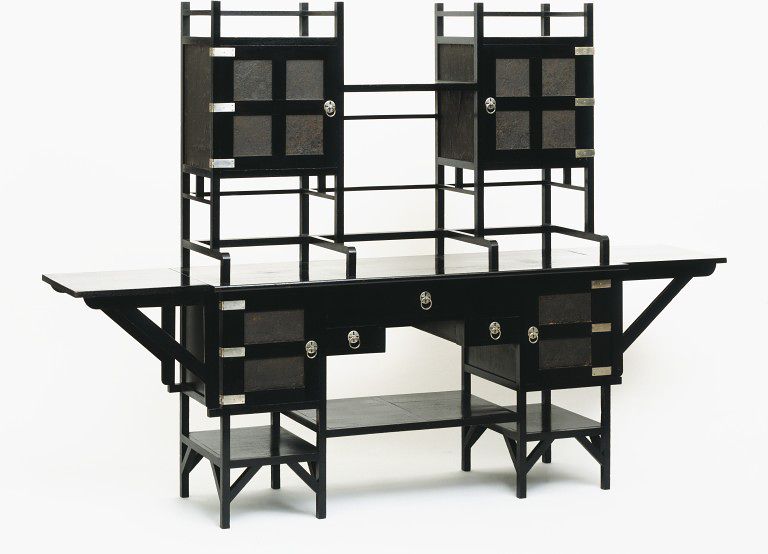