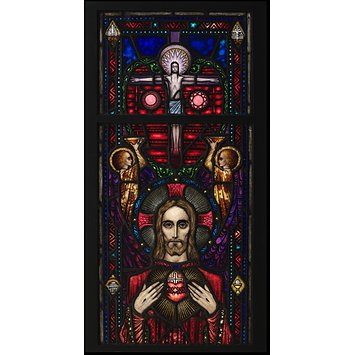 Apparition of the Sacred Heart

Harry Clarke was one of the great masters of 20th-century stained glass. He trained in his father’s studio and at the Metropolitan Art School in Dublin, which gave him an intimate understanding of the nature of glass. He soon learned to employ sophisticated techniques to create decorative effects. He toured Europe to study medieval glass, and was especially inspired by the 12th-century glass in the French cathedral of Chartres. Many of his windows, such as this one, are reminiscent of those at Chartres in the depth and richness of their colour schemes.

He created the design for the Apparition of the Sacred Heart in 1918. This was in preparation for a window for Phibsborough Church in Dublin, commissioned by the Arch-Confraternity of the Sacred Heart. The window was completed and installed in 1919. Subsequently, Clarke and his studio reused the original design to make other Sacred Heart windows.

The devotion to the Sacred Heart of Jesus Christ dates back to medieval times, but it did not become a feast of the Catholic church until 1670. The spread of this devotional feast was largely due to the visions of St Margaret Mary Alacoque (1647–90), who communicated that Christ wanted to reveal his ardent love for mankind. He wished to manifest his heart with its abundance of love and mercy. Margaret Mary was canonised in 1920.

The central image depicts Jesus Christ revealing the Sacred Heart. Above this main figure is a smaller one of Christ on the Cross with angels catching his blood in bowls. At the base of the panel another small figure of Christ is seen ascending, leaving behind the imprints of his feet on the ground below. Various symbols relating to Christ can be seen in little roundels flanking the main figure. There is a chalice with the Sacred Monogram (IHS), an Agnus Dei (Lamb of God bearing a cross), the loaves and fish.
The overall tone of the panel is red with areas of yellow, purple and blue. There are three horizontal armature bars.
In the lower right there is a cartouche with the inscription 'Harry Clarke Stained Glass Ltd. 1940'.

The design for the 'Apparition of the Sacred Heart' was made by Harry Clarke in 1918 for a commission for a three-light window in for St Peter's Church, Phibsborough, Dublin. This church was the home of the Arch-Confraternity of the Sacred Heart in Dublin. The design was approved in July 1918, a cartoon completed in November 1918 and the panel completed in August 1919. This panel was the central light in a three light window, the other panels devoted to St Mary Magdalene and St. John the Baptist.

The devotion to the Sacred Heart of Jesus Christ is a devotion to Jesus himself and his love for humanity which is represented by his heart.

This devotion has a long history and is found as early as the 12th and 13th centuries, especially in the writings of St Anselm (d.1109) and St Bonaventure (1221-1274). The devotion was primarily a personal one and it wasn't until 1670 that the Church instituted a feast in its honour.

Nonetheless, it is largely due to the revelations made by Christ to St Margaret Mary Alacoque (1647-90) that the feast became a widespread devotion within the Church. St Margaret Mary communicated that Christ wanted to reveal through her his ardent love for mankind and his wish to manifest his heart with all of its abundance of love and mercy.

St Margaret Mary was canonized in 1920.

St. John Eudes (1601-1680) was the author of the liturgical worship of the Sacrd Hearts of the Virgin Mary and Jesus Christ. He was canonized in 1925.

(March 1918) Clarke made a preparatory coloured design for a three-light window depicting the Sacred Heart, St Mary Magdalene and St John the Baptist to be erected for the Vincentian Fathers in St Peter's Church at Phibsborough in Dublin. Little scenes in these side panels relate to the lives of St Margaret Mary and St John Eudes. In October he transferred the design to the cartoon stage and the window was completed by August 1919.

Panel with clear, coloured and flashed glass, acided, stained and with painted details depicting the Apparition of the Sacred Heart. Designed by Harry Clarke in 1918 and made by his studio in 1940.

THE APPARITION OF THE SACRED HEART

This is a second version of the central image of a three-light window in St Peter's, Phibsborough, Dublin. At St Peter's the image is flanked by figures of St John the Evangelist and St Mary Magdalene. The subject matter is explained by the fact that the church is the home of the Arch-Confraternity of the Sacred Heart in Dublin.

The design was first used for a three-light window in Phibsborough Church, Dublin. 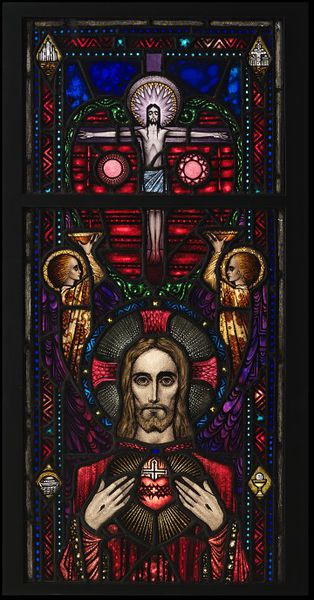