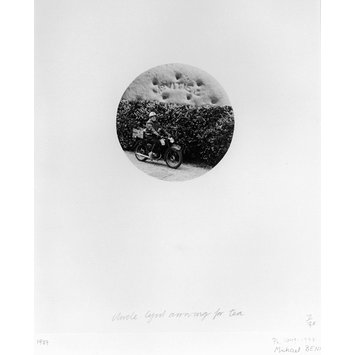 Bennett made this portrait for a series of 36 that he titled ‘The Family’. The exhibition toured widely and was featured on television in 1977, in the BBC ‘Arena’ programme.

Bennett subsequently worked as a photomontage artist. He aimed ‘to arrive at a satirical or humorous end which is mass-published’. In 1989 his work featured in ‘The Satiric Verses’ in the magazine Private Eye.

Gelatin-silver print photomontage; circular image of a man on amotorcycle. Behind him is a hedge, and behind that looms a McVities' 'Rich Tea' biscuit (oversized and making up the upper part of the image).

Since 1965 Michael Bennett has used photomontage - combining fragments of various images - to make a satirical or political comment. Uncle Cyril arriving for Tea, for example, was one of his first images, in which scale and incongruity are exploited to full comic effect. He has said that his "basic ideas are to manipulate images, to continually experiment, and to arrive at a satirical or humorous end which is mass published." In accordance with these aims, Bennett’s publications have included a series of postcards intended for cheap and widespread distribution.

Michael Bennett (1954–)
‘Aunt Ena Watching Telly’, ‘Janet and the Kids Departing’, ‘Cousin Tony Looking For a Job’, ‘My Dad and a Rainy Day’, ‘Uncle Cyril Arriving For Tea’, ‘Sister Sally with Her Cat’, ‘My Mum at the Window of Our House’, ‘Uncle Ralph Relaxing’
1976

These photographs record moments in the lives of Bennett’s extended family in Kent. They combine humour and charm with emotion and intimacy, prompting us to reflect on the relationships and values that characterise our own families. 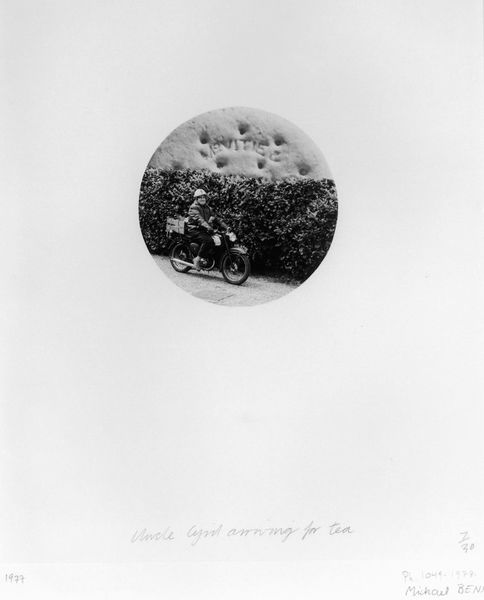