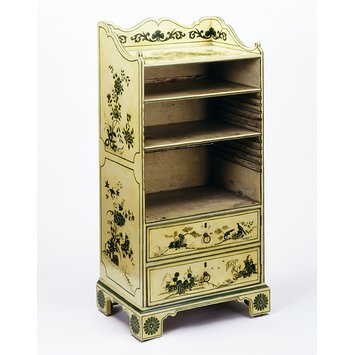 Object Type
This small bookcase is in the form of a cabinet. It has four sliding shelves above a cupboard with a single door disguised as two dummy drawers. The bookcase is raised on a plinth, but supported by bracket feet.

Place
This bookcase and its pair are listed in the inventory of the contents of David Garrick's villa at Hampton, Middlesex (now south-west London) in 1779. They were in the best bedroom and adjoining dressing room. Other pieces supplied by Thomas Chippendale (1718-1779) included a dressing table (now at Anglesey Abbey, Cambridgeshire), a clothes press, a corner cupboard and a bed. Bookcases were not usually found in bedrooms at this time.

David and Eva Garrick acquired their riverside retreat at Hampton in 1754. The existing villa was improved by Robert Adam (1728-1792) and the grounds were laid out by Lancelot 'Capability' Brown, which included a domed temple containing a statue of William Shakespeare by Louis François Roubiliac (1702-1762). The villa's interiors were furnished by Chippendale from 1768 to 1778 with painted furniture in a Chinoiserie style.

Ownership & Use
The unusual presence of a pair of bookcases in a bedroom reflects the interests of their first owner. David Garrick (1717-1779) was an actor, writer and manager of London's Drury Lane Theatre. As well as writing16 new plays he rewrote some of Shakespeare's tragedies, turning Romeo and Juliet into a romance with a happy ending. One can just imagine Garrick reading in bed. His considerable collection of books and plays were given, after his wife's death, to the British Library.

The bookcase is raised on a plinth 10 cm high (including the upper moulding), cut away to present bracket feet, the flat surfaces with green lining on a white ground, and each side of each foot painted with a floral in green. The flat sides of the cabinet are painted with two rectangular panels of lining with inset corners, each panel decorated with sprays of flowers and foliage. The top edge of each side is shaped, rising to the back panel which also presents a shaped top edge, the sides and back forming a raised gallery to the top (10 cm high at the highest point). The gallery is painted on the inside with green lining, and formal scrolls of foliage with shell-like motifs at the centre and the corners. The flat top shows a single panel of lining with inset corners, enclosing a more densely painted scene of Chinese landscape, including a building. All front edges of the sides, top and shelves show green lines. The door is disguised as two drawer fronts outlined with cock-beading painted green, each with single panel outlined, containing ornamental scenes and each set with a ring handle of lacquered brass and a false keyhole. In he upper keyhole is hidden a spring catch which operates at the top of the door.
The base and plinth are of pine painted with red lead. The feet, which are bracketed even at the back of the piece, are set with recessed brass castors, 3 with circular plates, one with a square plate (probably replaced). The back of the cabinet is in oak with the grain running horizontally, painted inside and out with a thin coat of white paint over red lead. The two adjustable shelves and the two fixed shelves at the top and bottom of the open section are similarly painted oak but the leading edges show lippings of mahogany which would allow a better finish to the painting on the visible edges. The sides of the cabinet are of Cuban mahogany, as are the top of the back and the door.

This bookcase and its pair were first recorded in the Best Bedroom and Dressingroom at David Garrick's villa in an inventory of 1779. They were described as '2 small do. [jappan'd green & white] Bookcases with sliding shelves and cupboards under'. Garrick, actor and manager of the Drury Lane Theatre, acquired the villla at Hampton, on the river Thames as a country retreat, in 1754. He and his wife employed Robert Adam (1728-1792) to make the necessary architectural improvements and Thomas Chippendale's firm to supply the furniture. In keeping with the rural, informal atmosphere of the house much of the furniture was japanned or painted rather than veneered or gilded. When Mrs Delany visited the house in 1770 she wrote, 'The house is singular...and seems to owe its prettiness and elegance to her [Mrs Garrick's] good taste...on the whole it has the air of belonging to a genius.' The bookcases were part of a whole suite of furniture. Still known to survive are the bed, two wardrobes, a corner cupboard, a dressing table, a pembroke table and a stool. Several pieces are in the V&A Collections, including the bed (W.70-1916), two wardrobes (W.22 and W.23-1917) and the corner cupboard (W.24-1917), together with other piece from different rooms in the house, or made to supplement Chippendale's commission.

The pair to the bookcase is now in the possession of the Chippendale Society and is displayed at Temple Newsam House, Leeds.

Small bookcase, with two adjustable shelves above a single doored cupboard with two dummy drawers, painted with chinoiserie decoration in green on a ground of white.

In 1994 the Museum aquired by gift one of the small bookcases supplied by the cabinet maker Thomas Chippendale (1718-1779) for the villa at Hampton, on the Thames, which was furnished by the actor David Garrick (1717-1779) in the 1760s and 1770s. They were listed in the Best Dressing Room of the villa in an inventory taken in 1779.
A bookcase was an unusual form of furniture to supply for a dressing room and it must have reflected Garrick's intense interest in literary maters. The painted decoration was in keeping with much of the other furniture known from the villa (several pieces are on show in Gallery 122). The technique was well suited to the current taste for Chinoiserie decoration, with imitation of oriental laquer painting.
Painted or Japanned furniture has often suffered badly from wear or repainting. The Museum was very pleased to be offered a piece which retains so much of its original painting. The varnish had discoloured over the years and had absorbed atmospheric dirt, yellowing the delicate colour scheme of ivory white and green. The discoloured varnish was removed by staff of the Conservation Section. Also removed were a few areas of over-paint on old damage, matched to the yellowed varnish. Small areas of paint were touched-in once more and, allowing for the natural wear on some of the horizontal surfaces, the bookcase now demonstrates the liveliness and clarity of such schemes of painted decoration. [Jul - Aug 1995]
Part of the suite of green and white painted furniture shown here, supplied for David Garrick's bedroom at his villa at Hampton. The presence of a bookcase in the bedroom reflected Garrick's special interests. Painted furniture is often considered to be a cheaper form of furnishing, but here Chippendale has used an expensive hardwood, mahogany. [1996]

There is some question as to whether the bookcase was made or just painted by Chippendale's firm. See: Gilbert, Christopher, The Life and Works of Thomas Chippendale, 1978, pp.238-9. 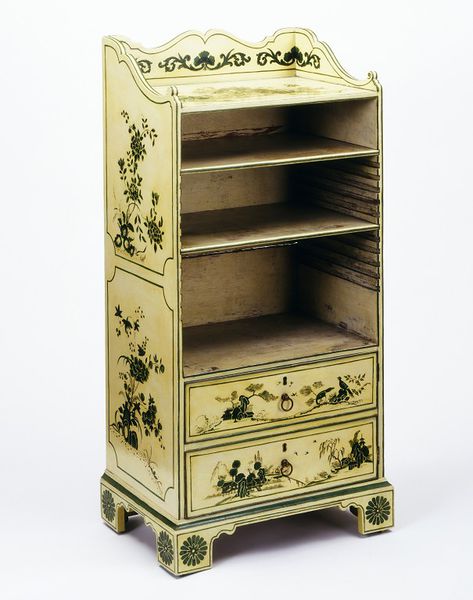