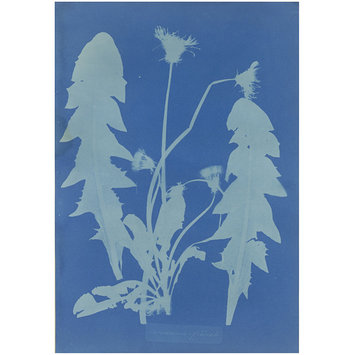 Anna Atkins was the world’s first woman photographer. She was also the first person to print and publish a photographically illustrated book, British Algae (1843). She took up what she called ‘Sir John Herschel’s beautiful process of cyanotype’ as soon as it was invented in 1842. At that time she was already skilled at drawing shells and other natural specimens. Her motivation for taking up photography was surely aesthetic as well as scientific. This is probably the first photographic portrait of a dandelion. (It could even be called a self-portrait, in that the dandelion was placed on light sensitive paper and imprinted its own image under the rays of the sun, without the use of a camera.) It comes from Atkins’s finest album, which she presented to her friend and co-photographer Anne Dixon in 1854.

Anna Atkins produced the first photographically illustrated book and is recognised as the first female photographer, with her three-volume British Algae: Cyanotype Impressions appearing in instalments from 1843. Atkins used the Cyanotype process which had been invented in 1842 by Fox Talbot’s associate Sir John Herschel.

Val Williams and Susan Bright, How we are: photographing Britain, from the 1840s to the present London: Tate Publishing, 2007. ISBN: 9781854377142.
Saunders, Gill. Picturing plants : an analytical history of botanical illustration. London: Zwemmer in association with the Victoria and Albert Museum, 1995.

'From Cyanotypes of British and Foreign Flowering Plants and Ferns',
1854

Atkins was the first to use photographs for illustrated books. Each cyanotype is a handmade unique print, so none of the plates in Atkins' botanical publications are identical. Despite being an 'impression' of the plant itself, the value of a cyanotype print to the botanist is limited because it can give no indication of volume, texture or colour.

Anna Atkins was the world’s first woman photographer. She used the cyanotype process, invented in 1842 by Sir John Herschel, to create images valued for their scientific detail and aesthetic appeal. She placed plant specimens on light sensitive paper, which imprinted their own image under the rays of the sun, without the use of a camera. 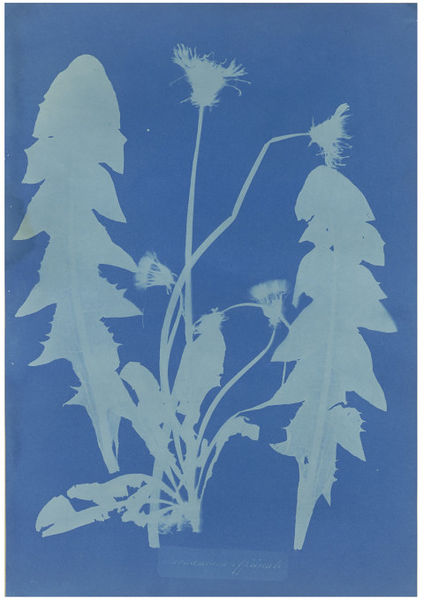