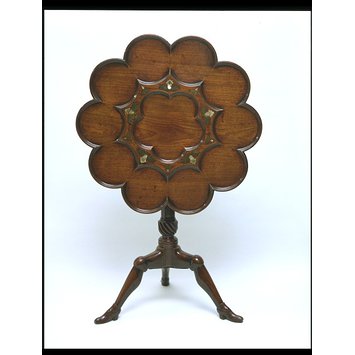 Object Type
The tea table was first introduced in the late 17th century. Elizabeth Maitland, Duchess of Lauderdale (died 1698), had 'a Tea-Table carved and guilt' in her Private Closet at Ham House near the Thames at Richmond in 1679. Around 1700, over 6,000 lacquered tea tables were imported through the East India Company. By the mid-18th century, London furniture makers produced their own alternative form for the luxury market in mahogany embellished with brass inlay. Today, 34 such tables are recorded.

People
Tea was still served to people of quality, although as prices fell it became a more popular drink. In 1745 it was noted that 'the tea-table costs more to support than would maintain two children at nurse'. This table is attributed to Frederick Hintz (died 1772), who settled in London and worked at the sign of The Porcupine, Newport Street, Leicester Fields. His stock in 1738 included mahogany tea tables, tea chests and tea boards.

Design & Designing
From 1730, some of the most luxurious furniture was decorated with brass inlay. The use of mother-of-pearl as well as brass inlay is described in an advertisement of Hintz's stock in 1738. The anthropomorphic legs of this table are rare, possibly inspired by Dutch prototypes.

A mahogany tripod table, inlaid with brass and mother-of-pearl. The top has scalloped edges, is dished to hold tea wares and is decorated with inlaid gentian flowers and leaves. It has a central pedestal, to which are joined three legs, in the form of human legs complete with stockings and buckled shoes. The table top is hinged and can be tilted down into a vertical position and placed against the wall where the brass and mother-of-pearl inlay would catch the light.

Mahogany, with inlaid brass and mother-of-pearl

Given by Brigadier W.E. Clark DSO, through The Art Fund (Registered papers 65/370). At that time it was suggested that it may have been by Abraham Roentgen (1711-93), who worked in Britain as a young craftsman and produced table similar to this one on his return to Germany.

Taking tea became so fashionable during the 18th century that specialised items of furniture were produced, such as this tea table. The scalloped edges were designed to protect the tea wares and the hinged top meant that it could be placed flat against the wall when not required.

Just before this table was bequeathed to the Museum, another brass-inlaid, lobed table was left to the Museum by Claude D. Rotch (W.22-1962). He also left the Museum a sinpler version of this pattern of table, without brass inlay (W.38-1962).

The anthropomorphic tripod legs to this table are very unusual. The top is dished to protect porcelain tea wares in use. The combination of brass and mother-of-pearl inlay suggests that the table was made by Frederick Hintz, a London cabinet-maker of German birth, who specialised in such work. The inlay on the table top is in the form of gentian flowers and leaves. The shoe feet have brass buckles. [1995] 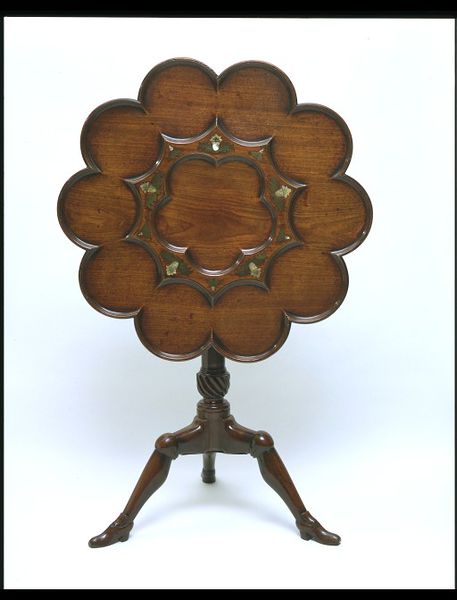