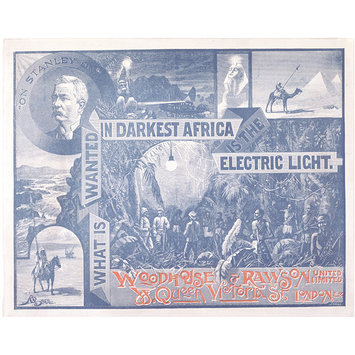 What is wanted in Darkest Africa is the Electric Light

This trading card was produced for the electricity and engineering company, Woodhouse and Rawson in London between 1890 and 1893. It was designed by engraver Arthur Bartram Snell. Snell’s brother Charles had worked on engineering patents with the company since 1982. Little is known of Arthur Snell, who was evidently a skilled wood engraver; he appears in London post office directories for the 1890s.

The print is in an imperial kitsch style that became popular at the end of the nineteenth century. Victorian advertisers regularly used the image of H. M. Stanley, a Welsh explorer, on their products. Stanley is best known for the Emin Pasha Relief Expedition through modern day Egypt, Kenya and Uganda. Even though the expedition came to an end in 1890, Stanley’s image remained popular throughout the 1890s.

To commemorate Stanley’s return to Britain, The Illustrated London News printed a special edition on the 10th May 1890. The edition described the different stages of Stanley’s expedition, illustrated in this trade card. The image in the top left corner is a representation of the medal given to Stanley by the Royal Geographical Society in 1890.

Woodhouse and Rawson were one of the earliest suppliers of electric light and their advertisement reflects the days of the Empire, with its punning references to 'Darkest' Africa, a term coined in the nineteenth century. It was used to describe the explorations of the British Sir Henry Stanley (1841-1904) and Dr Livingstone (1813-73) into uncharted areas, as well as the work of white missionaries bringing Christianity, or 'the Light of the World', to Africa.

Sir H. M. Stanley-related ephemera, or ‘imperial kitsch’, typical of the late nineteenth century. Blue and red ink printed trading card. Features six boxed off scenes of colonial visions of Africa including the pyramids, a tunnelled out jungle lit by an electric light bulb dangling over the heads of colonists and native inhabitants, and a heraldic image of Sir Henry Morton Stanley in the top left corner. The text, ‘What is Wanted in Darkest Africa is the Electric Light’ floats on a banner across the centre of the print. Company name printed in red ink at the bottom of the card. Card is made from thick paper.

London (A black and white copy of the print is held by the London Metropolitan Archives and on it’s reverse is printed ‘Whitehead, Morris & Co., Printers, 9, Fenchurch Street, E. C., London’. The copy held by the V&A is mounted so the reverse is not accessible for inspection, although it is likely they were printed in the same place., printed)
England (made)

What is wanted in Darkest Africa is the Electric Light

A similar engraving to this was produced by Arthur Snell for Woodhouse and Rawson and is currently held in the John Johnson Archive at the University of Oxford. This print is similar to the V&A’s in that it uses comparable graphic elements, such as banners, borders and multiple fonts as well as a light bulb dangling in the centre. The difference is that where the V&A’s trade card depicts the African colony, the John Johnson Archive’s print features electrical lighting illuminating Woodhouse and Rawson’s workshop in the metropole. It seems likely that both this and the Darkest Africa print were part of a series, or a pair commissioned by Woodhouse and Rawson during the early 1890s.

The V&A’s Nominal Acquisition File for the print notes that it was acquired as part of a collection of 897 pictorial advertisements on the 10th April 1919. The records contain correspondence for the V&A’s purchase of the collection from an F.T. Corrie as early as April 1915.

In a letter written to the Director of the Museum by curator of the Prints and Drawings Room, Martin Hardie, on the 15th April 1919, he notes that although the purchase of the collection had been approved in 1915, it ‘had to be postponed due to no funds being available’. The whole collection of 897 pictorial advertisements was subsequently purchased for seven pounds and seven shillings in 1919.

The collection comprised of advertisements from artists including Walter Crane, Dana Gibson, Bernard Partridge and Aubrey Beardsley. However, curator Martin Hardie wrote in a letter to the museum director in 1915 that on average, ‘the prints are not of high merit, though individual examples of some artists works are most interesting, but collectively they offer most useful material for the designers of posters, advertisements, etc.’. Nowhere in the acquisition file is the Darkest Africa print mentioned, suggesting that it was not considered of high cultural or monetary value.

The Nominal Acquisition File also contains a report on the acquisition of a pencil sketch of the site of the Natural History Museum from Corrie, purchased for two pounds and 2 shillings on the 10th February 1904.

Little else is known of collector F. T. Corrie, other than that in 1914 he was living at 32 Connaught Road, Harlesden, N. W. As such, the previous provenance of the Darkest African Print remains unknown.

'What is wanted in Darkest Africa is the Electric Light'; Advertisement for Woodhouse and Rawson United Ltd. Electrical Engineers and Manufacturers, London 1890-4; engraved by Arthur Snell; colour wood engraving

Woodhouse and Rawson were one of the earliest suppliers of
electric light and their advertisement reflects the days of the
Empire, with its punning references to 'Darkest' Africa, a term
coined in the nineteenth century. It was used to describe the
explorations of the British Sir Henry Stanley (1841-1904) and
Dr Livingstone (1813-73) into unchartered areas, as well as the work
of white missionaries bringing Christianity, or 'the Light of the
World', to Africa.

Little is known of Arthur Snell who was evidently a skilled wood
engraver and appears in London post office directories for the
1890s. [] 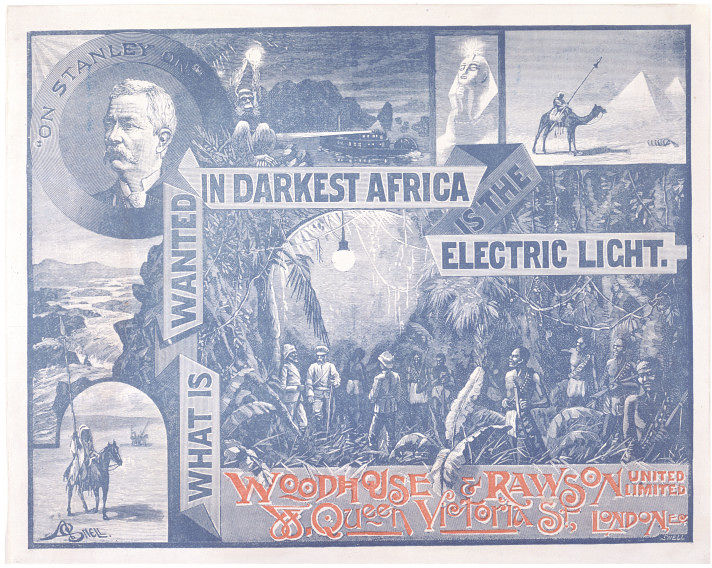