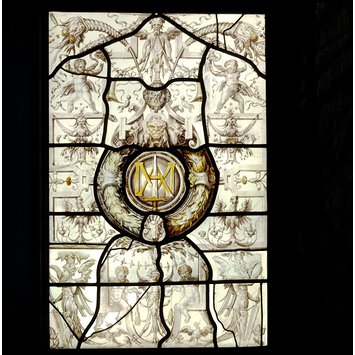 This panel displays the badge and monogram of Anne de Montmorency (1493-1567) who was Constable of France under King Francois I and Henri II. It is believed that the panel was part of a large scheme of heraldic and figurative painted and stained glass he had commissioned for his Chateau at Ecouen which was built in the middle of the 16th century.

The sword in the centre of the panel was a emblem adopted by Montmorency because in his role of Constable he was permitted to carry an unsheathed sword before the king on ceremonial occasions.

Armorial shields begin to appear in church windows in the 13th century and in the 14th century they begin to be incorporated into the glazing schemes of aristocratic households.

A new range of decorative motifs starts to appear during the Renaissance. The armorial devices in this panel are surrounded by elaborate strapwork, grotesques, birds and cornucopiae. This style is associated with the court school of painters based at Fontainebleau.

Rectangular panel of clear glass painted with a wreath in the centre enclosing a sword piercing the monogram AM. This is surrounded by a ferrorierie framework. At the top are two cornucopias flanking a grotesque figure. Below are two standing putti. Beneath them two female grotesques flanking three fanciful animal heads which surmount the central wreath, the lower part of which is in turn flanked by two eagles with outstretched wings. Two horned and winged satyr-like figures with grasshoppers crawling up them flank two cupids which in turn flank a central female grotesque figure. At the base there are two further birds with outstretched wings. There are touches of yellow stain and sanguine throughout.

Believed to have originally been in the Chateau of Ecouen and probably located in the eastern entrance wing which was demolished in 1787.

At the time of the French Revolution the panel was rescued by Alexandre Lenoir and displayed in the ‘Musée National des Monuments Francais’.

It was probably acquired from Lenoir or from his glass restorer, Tailleur, by J.C. Hampp, Norwich dealer.

At some point after the closure of the Musée National in 1814, it is probable that it was in the possession of William Beckford at Fonthill Abbey in England. If so, in 1823 it was one of ‘three large panels, very fine and curious, the arms and device of the Montmorency family’ included in the Fonthill Abbey sale, lot no.346.

Anne de Montmorency (1493-1567) was appointed Constable of France by King Francois I in 1538. As Constable, Montemorency was entitled to carry a naked sword before the King on ceremonial occasions. He built the Chateau of Ecouen for his own use between about 1538 and the 1550s. It stands just outside Paris and was elaborately decorated by artists and craftsmen of the School of Fontainebleau. A prominent feature of the these decorations were the painted windows which were inserted over a number of years between about 1541 and 1559. None survive in their original setting but there are a number in existence, similar to the Museum's panel as well as a famous set showing the story of Cupid and Psyche, now in the Musée Condé, Chantilly. The glazing scheme at the chateau was quite extensive. The Cupid and Psyche windows were composed of 44 panels and where inserted into the structure of the west wing. A description of the chateau dating from 1678 describes the windows in the east wing as grisaille panels with grotesques. From this description it is thought that this panel came from the east wing windows.

The surviving panels from the Chateau indicate that a number of different painters were involved in their execution. They probably worked from cartoons supplied by the artists at the school of Fontainebleau.

There are other panels with the device of Montmorency: one in St. Mark's, Bristol (Lord Mayor's Chapel); one in the Museum of the Renaissance at the Chateau d'Écouen (formerly in the Cluny Museum), one in the parish church at Écouen and one known only from a 19th century illustration.

Attribution note: One of a number of similar panels from the same commission. 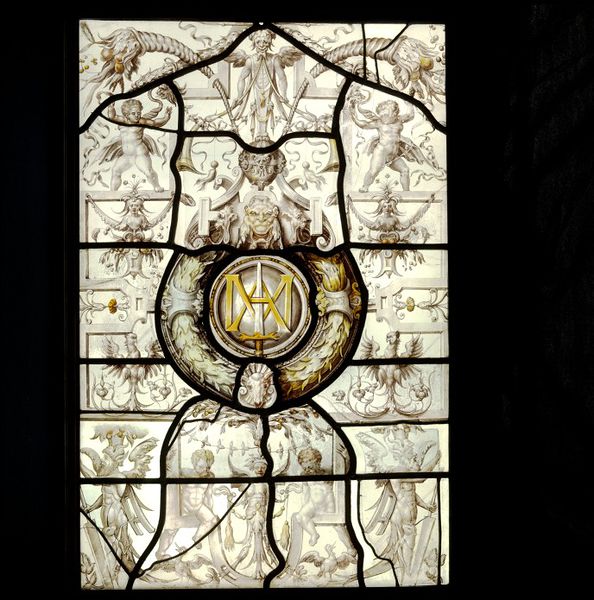