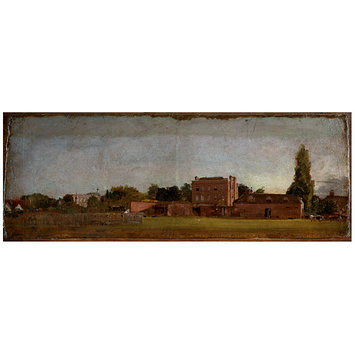 This panoramic view depicts Constable's birthplace, with East Bergholt church to the left. The family left this house in 1819. It was later demolished. Constable recalled with delight the scenes where his 'ideas of Landscape were formed' and 'the retrospect of those happy days and years'.

View of Golding Constable's house in oil. On the back was a label in ink which read "The house in which john Constable RA was born Painted by John Constable RA".
This is catalogue no.102 in Graham Reynolds "Catalogue of the Constabale Collection" (1960).

oil on millboard laid on panel

Given by Isabel Constable, 1888

'In the year 1811 Constable's exhibits at the Royal Academy comprised 'Twilight', and 'Dedham Vale: morning' (now in the collection of Sir Richard Proby). He visited Suffolk in the spring and paid his first visit to Salisbury in the autumn: this was probably the occasion of his first meeting with John Fisher, who was to become his closest friend. His attachment to Maria Bicknell became known during this year, and he received her father's permission to write to her in October.'