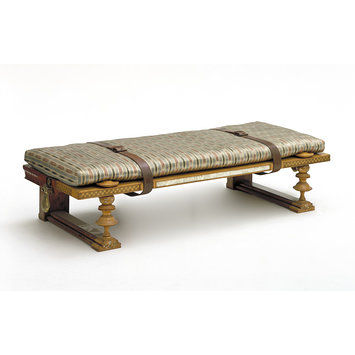 This couch was designed by the painter Sir Lawrence Alma-Tadema for use as a studio prop. The two sides show different decorative motifs. On one side the legs are turned in Pompeiian style. On the other the legs are carved with Egyptian ornament. Alma-Tadema specialised in idealised scenes of Classical life, with elegantly draped women and much shimmering marble. The couch appears in a number of his compositions, with different upholstery depicted to extend its range as a prop.

Bench with solid top, inlaid around the edges, on pair of turned and inlaid Pompeian style legs on one long side and pair of square-section legs carved with Egyptian motifs on the other, both sets of legs being joined at the bottom by flat stretchers; brass handles at each end and four turned roundels on the flat top, above each leg, between which sits a long cushion, covered in modern patterned silk and held in place by two leather straps.

Mahogany and other woods, carved, turned and inlaid, with mother of pearl inlay, brass mounts and leather straps. The silk upholstery is modern.

This couch, originally one of a pair, was designed by Sir Lawrence Alma-Tadema for use in his studio. It has alternate sides with different pairs of legs, one side in the Egyptian style and the other Pompeian, thus enabling him to use the couch as a prop for many of his paintings depicting scenes of classical life. Although it is not certain when the couch was made it was probably shortly before it was exhibited by Alma-Tadema in the fourth Exhibition of the Arts and Crafts Exhibition Society, at the New Gallery, London, in 1893, cat. no. 84. At the Exhibition it was praised by The Studio, "Perhaps the nearest approach thereto is Mr. Tademas's beautiful Studio Seat, but even this, perfect as are its proportions, and cunning as is its fashioning, affects one with a subtle sense of unreality, almost of theatricalism. "(vol. II, 1893, p. 17)

He may have commissioned the firm of Johnstone, Norman and Co. to make the couch. His earlier commission for a music room for H.G. Marquand of New York. in 1884 had included furniture after his designs which was made by this firm.

Both couches were included in the sale of Alma-Tadema's house and collection, 34 Grove End Road, London, by Hampton & Sons, June 9th 1913, lots 10 and 11, and illustrated in the studio in the frontispiece for the catalogue. According to The Times, June 10th 1913, page 11, the two couches sold for seven guineas each (£7 35p). According to Miss Headley, from whom the Museum purchased the couch, her father bought it at Alma-Tadema's sale but it is not clear whether it was lot 10 or lot 11.

Charles Handley-Read, a pioneering collector of High Victorian furniture, gave £100 towards the purchase of the couch by the Museum.

The cushion is covered in modern silk similar in pattern to the covers visible on the couches in 1913. This modern silk was presented by the designer Thea Porter, presumably shortly after the couch was acquired, and the cushion was covered in it by the time of the loan of the couch to Sheffield in 1976.

Alma-Tadema first travelled to Italy on his honeymoon in 1864 when he visited Pompeii as well as other archaeological sites. As well as his own sketches from his Italian travels, Alma-Tadema owned a large collection of drawings, watercolours, prints and photographs of architecture and of archaeological sites which he used for his paintings of classical subjects. In 1915 this collection, and his extensive library of architectural and archaelogical publications, known as 'The Alma-Tadema Library', was purchased for the Museum from Alma-Tadema's estate by the Alma-Tadema Memorial Committee with the agreement of Alma-Tadema's daughters. In 1946, a reassessment of space in the National Art Library required for Alma-Tadema's books, most of which were duplicates of NAL stock, resulted in The Alma-Tadema Library being offered to the University of Birmingham where they are now housed in the Heslop Library. His collection may have included photographs of a couch found at Pompeii in 1868 which might have been the source for the legs and inlaid decoration on Alma-Tadema's studio couch.

mahogany and other woods, carved and turned, with mother-of-pearl inlay and brass mounts, silk covered cushion and leather straps; designed by Sir Lawrence Alma-Tadema for his own use and possibly made by Johnstone, Norman and Co, English about 1893

This seat, which was designed by Sir Lawrence Alma-Tadema R.A. b.1836 d.1912 and exhibited at the Arts and Crafts Exhibition of 1893, was one of a pair which stood in the studio of the painter's house in St. John's Wood. It is shown in a number of his paintings, and an interesting feature is that one side is Pompeian in style, being based on a couch which was excavated at Pompeii in 1868, and the other Egyptian. The covering is a modern replacement. [Unknown]
This seat is one of a pair designed by Sir Lawrence Alma-Tadema R.A. (1836-1912) for his studio in the celebrated house in Grove End Road; one side is inspired by a Pompeian original; the other is Egyptian in style. [Unknown]
Designed by Sir Laurence Alma-tadema (1836-1912)
Possibly made by Johnstone, Norman & Co., London
Mahogany, satinwood, ebony, and cedar with mother-of-pearl inlay and brass mounts. Modern upholstery, with original leather straps.

One of a pair designed by Alma-Tadema for the studio in his house in Grove End Road, London. One side is closely based on an ancient Roman bronze seat excavated at Pompeii, the other side is Egyptian. This seat acted as a studio prop and appears in many of his paintings. The firm of Johnstone, Norman and Co. made several pieces of furniture for Alma-Tadema and may therefore have produced this seat for his own house. []

Exhibited in the Arts and Crafts Exhibition of 1893. 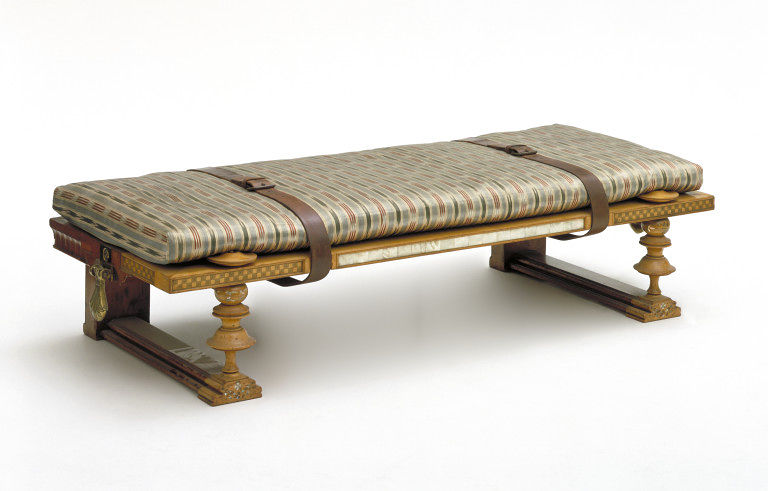