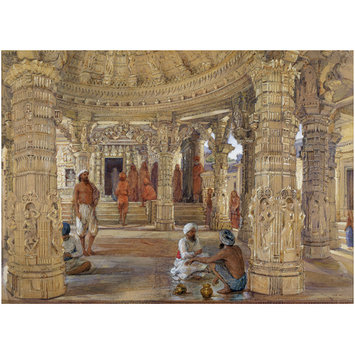 Interior of the domed entrance to the Neminath temple, Dilwara, Mount Abu

William Carpenter was the eldest son of the distinguished portrait painter Margaret Sarah Carpenter and of William Hookham Carpenter, who became Keeper of the Prints and Drawings Department at the British Museum. In early 1850 he set off in the footsteps of his younger brother Percy, also an artist, and landed in Bombay. He spent much of his time painting portraits of local rulers and the surrounding countryside, often wearing Indian dress himself. He travelled widely, from Sri Lanka in the south to Kashmir in the north, and he also spent some time in the Punjab and Afghanistan before moving south to Rajasthan. He appears to have returned to England in 1856. Ten years later he was living in Boston, USA, but he later returned to London, where he died in 1899. This painting is of the interior of the main Jain temple at Dilwara on Mount Abu and shows pilgrims standing and sitting.

Interior of the domed entrance to the Neminath Temple, the main Jain temple at Dilwara with elaborately carved columns and men standing, sitting or squatting.

Pencil and watercolour, heightened with white, on paper

Historical significance: William Carpenter (1818-99)
Carpenter travelled from Ahmadabad on the Mehsana road in April 1851; he was certainly at Mehsana that month (APAC:WD 3879). He probably continued to Sidhpur and Palanpur and on to Mount Abu and the Dilwara Temples in May and June. From Mount Abu, he took a route north-east through Rohera, then probably across the mountaines to Bedla in June, and on to Udaipur, where he spent the remainder of June and July.

William Carpenter was trained at the Royal Academy Schools, and was the eldest son of the distinguished portrait painter Margaret Sarah Carpenter and William Hookham Carpenter, who became Keeper of the Prints and Drawings Department at the British Museum.

He was in India from 1850 t0 1856, during which time he travelled extensively from Bombay (Mumbai) and across western India to Rajasthan, Delhi, Kashmir, Lahore and Afghanistan. His depiction of every day street scenes and groups of people is remarkably accurate and animated, his portraits vividly capturing the character of his sitters and the glowing effects of sunlight as cityscapes and architectural monuments. Brilliantly executed in a range of warm colours, his watercolours evoke a gentle romanticism.

After his return to England, The Illustrated London News published some of his watercolours. In 1881, he exhibited 275 of his paintings in a one-man show in the South Kensington Museum, London. This entire collection was subsequently acquired by the V&A.

Interior of the domed entrance to the Neminath temple, Dilwara, Mount Abu by William Carpenter, Painting, watercolour on paper, India, 1851

This painting is of the main temple at Dilwara. Carpenter skilfully captures the intricately carved marble interior as well as the day-to-day activities of the priests and devotees. [] 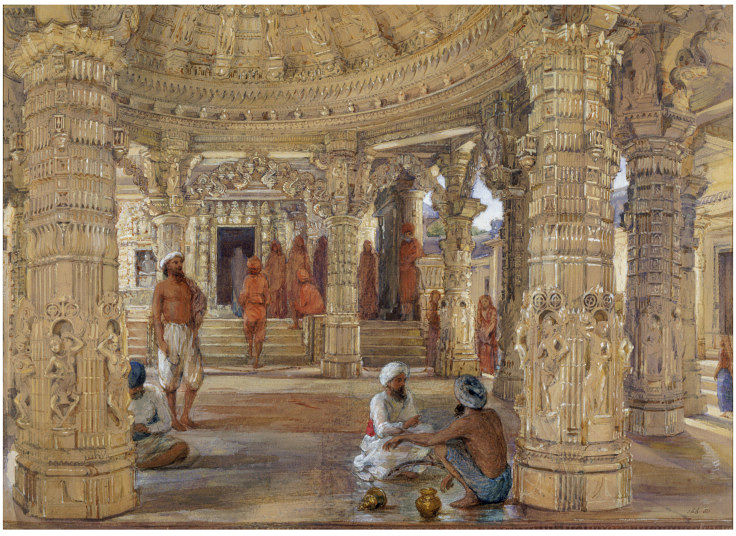