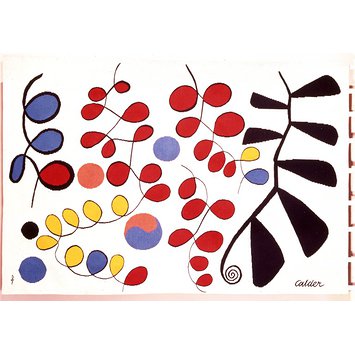 Alexander Calder is considered to have been one of the most influential sculptors of the 20th century. Originally an engineer, his understanding of mechanics influenced his later work as an artist. Calder's method of bending and twisting wire to create three dimensional forms has been described as 'drawing with wire' and his invention of the mobile subsequently shaped the world of modern art. In 1926, after moving to Paris, Calder created Cirque Calder, a unique collection of work that had been designed to be manipulated by Calder himself, a grown up version of the puppet show. The basis for each piece was a wire skeleton, adorned with leather, cloth and found materials. In 1962 Calder designed a group of tapestries to be woven in Aubusson, famous for its weaving workshops. The influence of the mobile can be seen in Autumn Leaves, in both the abstract form and bold vibrant colours.

Tapestry of hand woven wool on cotton warp. It has an off-white ground with a clear abstract design mainly in primary colours and black, based on Calder's mobiles.

On the right is the dominant 'mobile' with seven counter-balanced triangular 'fins'. The uniting stem terminates in a spiral, in heavy black wool. On the upper centre right there is a 'mobile' with ovals of solid colour. From top to bottom there are seven reds ovals, one yellow, and one bright blue. A similar 'mobile' below has seven red ovals. Above the centre is a small circle in mid-blue, and below left is a yin and yang like symbol in mid-blue and orange, both circles have a slight 3-D effect created by the use of fifteen strands of fine wool for the weft.

On the left there is a long curving 'mobile' with nineteen ovals. From top to bottom there are ten red, six yellow, one bright blue, one yellow, and one red. Three circles edge its lower curve in orange, black and mid-blue. These and a further 'mobile', in the upper left with three blue ovals and one red, have a slight 3-D effect created by the use of a heavier wool and multiple strands of fine wool for the weft.

Right and left edges are turned and crudely 'herringbone' hemmed.

Aubusson (made)
France (made)

Tapestry-woven wool on a cotton warp

One of twenty six tapestries especially designed by Calder for Pinton Freres each of which is limited, by French law to an edition of six woven only on demand and marked on the reverse 1/6, 2/6 etc.

Historical significance: Calder designed his first tedtiles in 1929 then much later in 1962 a group of tapestries designed by Calder were woven in Aubusson under the direction of Pierre Baudouin and in 1964 he executed a small number of tapestry cartoons. This most recent series is perhaps the most important, the tapestries revealing a successful interpretation of the cartoons by highly skilled weavers. Each work bears the artist's signature and the mark of the weaver. The warp is cotton and the weft mainly high grade Australian wool, handspun and carefully dyed for each tapestry. This particular work has strong links with Calders' mobiles and stabiles both in the abstract form and the bold vibrant colours.

Born in 1898 Calder is often thought to be one of the most influential sculptors of the 20th century. He originally trained as an engineer and his knowledge of mechanics influenced his later work as a sculptor. Calder's method of bending and twisting wire to create three dimensional forms shaped the world of modern art and he is credited with the invention of the mobile. In 1926 Calder moved to Paris and created Cirque Calder, a unique collection of work that had been designed to be manipulated by Calder himself, a grown up version of the puppet show. The basis for each piece was a wire skeleton, adorned with leather, cloth and found materials.

Tapestry of wool and cotton, 'Autumn Leaves', designed by Alexander Calder and made by Pinton Frères, Aubusson, France, 1971 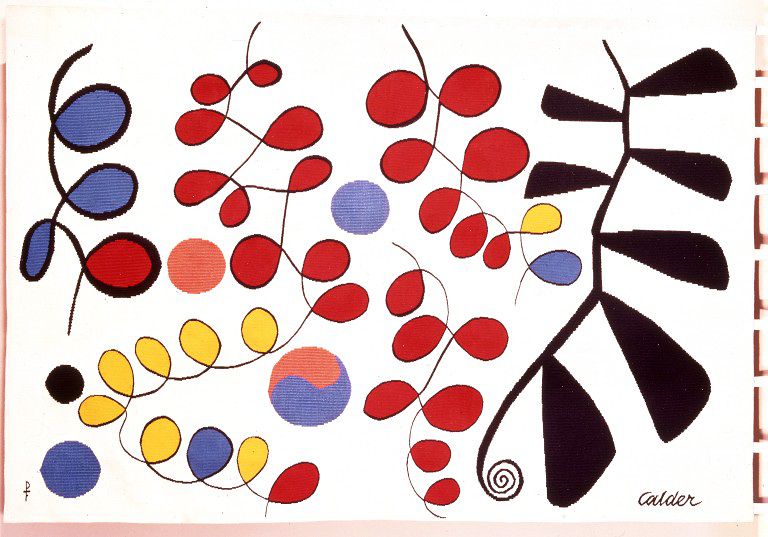