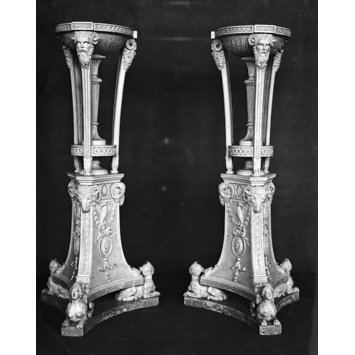 Object Type
Adam designed many candlestands with triangular plinths in the form of an ancient Roman sacrificial altar. They would have been set in pairs on stands on either side of a mirror. The reflection in the glass strengthened the light of the candles.

People
Sir Watkin Williams-Wynn, for whom the candlestands were made, was a leading patron of arts and music. He admired the works of Giovanni Battista Piranesi, who dedicated to him his Vasi, Candelabri, Cippi, Sarcofagi (1778), a collection of engravings of Neo-classical ornament. It is not known who made the candlestands but Sefferin Alken (active 1744-1783) has recently been suggested.

Materials & Making
The stands were painted pale blue with white ornaments to match the colour scheme of the Eating Room. They are composed of separately carved sphinxes, rams' heads, masks, mouldings, garlands and other ornaments of very high quality. These are attached to the main plinth with small pins.

Design
Three designs for candelabra for the Eating Room of 20 St James's Square are included in Adam's volumes of designs, housed in the Soane Museum, London. Two of them (vol. 6, nos 53 and 54) are dated 26 April 1777 and inscribed for Sir Watkin Williams-Wynn. The third (vol. 6, no. 49) is neither dated nor inscribed but most closely resembles the executed object.

Carved candlestand painted blue, and the ornament picked out in white, in the shape of a Roman sacrificial altar. The uppermost part is in the shape of a bowl, around the rim of which runs a moulding, in the form of a Vitruvian scroll frieze punctuated by three rectangles with anthemion decoration. The latter are placed immediately above Zeus-Ammon headed and fluted terms which terminate in a triangular pedestal. At their feet, these three terms enclose a round disc, the edge of which is decorated with a guilloche pattern, linked to the bowl by a fluted, tapering shaft, surmounted by a lambrequin. The outside of the bowl is decorated with acanthus leaves. The bowl and the terms rest on a triangular pedestal, decorated with eagles, swags and paterae. The edges of the pedestal are decorated with a foliate drop, surmounted by rams heads and terminating in lion's feet. The pedestal rests on three Etruscan sphynxes, which rest on a plain concave and triangular base.

This pair (and another pair of simpler design now in Melbourne Art Gallery) are thought to have been made for the eating room of 20 St James's Square, the London town house of Sir Watkin Williams Wynn, which was designed and built by Robert Adam between August 1771 and August 1774. There are at the Sir John Soane Museum three related designs, two inscribed for Sir Watkin Williams Wynn and dated 26 April 1777, and an unsigned and undated one (Soane Vol 6, No. 53, 54, and 49, respectively). The supplier of the candelabra remains unknown. At some unknown date after 1922 (or possibly after 1937, when the house was taken over by the Winchester House Property Company), the V & A's pair of torchères was aquired by Messrs Mallet & Son and purchased by the V & A in 1946. In 1975, Jo Darrah, the Museum Scientific Officer, made paint tests on this one of the pair, and it was subsequently repainted to match the original colours.

31/7/46 Mallet's invoice
describes "a pair of painted & gilt candlestands, designed by Robert Adam and originally in the collection of Sir William Watkins-Wynne, 20 St. James' Square. Illustrated in the Dictionary of English Furniture, Vol. III, p. 146, Fig.20" ( the invoice appears to refer to the pair that went to Melbourne).

The Museum purchased 1 pair of candlestands and arranged for another pair to be purchased by Melbourne.

7/8/46 notes, W A Thorpe to the Director
"Both pairs of stands require cleaning and a slight covering of scars and are now in A.W.R." Thorpe suggests the museum acquire "the larger pair, with sphinx feet, and not the pair in Dictionary III". …..A.W.R. have been instructed to complete work on the sphinx pair in time for the 18 August opening of Room 62.

8/8/46 notes by Leigh Ashton
"These two pairs of torcheres are almost identical. They came from the Watkins Wynne collection, who formerly owned 20 St James' Square, Adam's most celebrated house. The torcheres were designed by Adam personally for the Dining Room and are illustrated in all the Adam books. We are not well off for authentic Adam pieces and I ask sanction to purchase one pair for £400. I've arranged for the other pair to be purchased by Melbourne".

20/8/46 letter, Ashton to Mallet
refers to the purchase of painted iron candlesticks by Adam.

Historical significance: Although the maker remains unknown, the candelstands are excellent examples of finely carved work with archaeologically classical ornament, designed in Robert Adam's mature style. They served as a component of an elaborate decorative scheme for 20 St. James's Square, one of the very few London Houses, designed by the architect, still to survive. Sir Watkin Williams Wynn, for whom these were made, was perhaps the greatest landowner in Wales in his day, and his house in London as at perhaps the most fashionable address.

Carved candlestand, painted in blue and white, in the form of a Roman sacrificial altar. British (probably London), 1771-1774. Designed by Robert Adam.

PAIR OF CANDLESTANDS
ENGLISH; about 1774
Painted blue and white

Made for the dining-room of the London House of Sir Watkin Williams Wynn (1749 - 92). Closely related desighs are in Sir John Soane's Museum, London. The Candlestands are based on the shape of a classical tripod altar. The colours and ornament were repeated in the decoration of the room, The right-hand candlestand has been repainted close to its original colours.
Museum No. W.36 & A-1946. [1996]
British Galleries:
Robert Adam tried to control every aspect of the design of the house. These tripods were made for the London house of Sir Watkin Williams Wynn (1748-1789), a Member of Parliament and a major landowner in North Wales. Robert Adam designed the house and most of its fittings and furniture, including a silver dinner service. The colour of the stands and the ram's head motif was repeated in the wall decorations and other furnishings of the room. [27/03/2003] 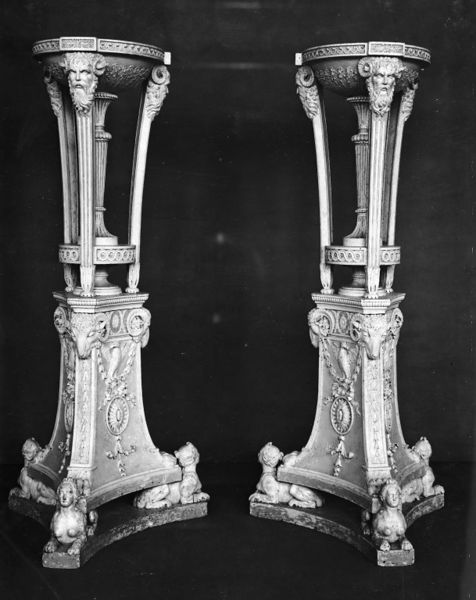