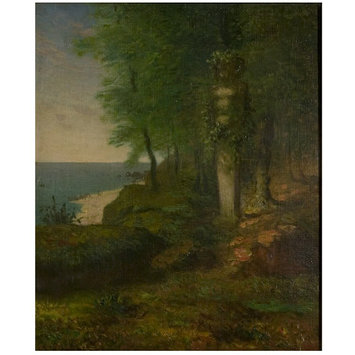 Study for the four seasons: Spring (Daphnis and Chloe)

Jean-François Millet (1814-1875) was born in Normandy and first trained with a local portrait painter, Bon Du Mouchel (1807-1846), and later in Cherbourg with Lucien-Théophile Langlois (1803-1845), a pupil of Antoine-Jean Gros (1771-1835). In Paris, he then entered the atelier of the history painter Paul Delaroche (1797-1856). He first specialised in portraiture and then moved towards the naturalistic style with peasant scenes for which he became best known.

This painting is a preparatory study for the allegory of Spring (The National Museum of Western Art, Tokyo), whose definitive version includes the figures of Daphnis and Chloe in the foreground. The present painting depicts a landscape with a seashore in the background, probably inspired by the Normandy coastline Millet particularly favoured. In the foreground is a statue of Pan adorned with wreaths of foliage, which alludes to the mythological subject matter of the definitive version. This is a rare thematic for the painter who is best known for his scenes of the contemporary rural life.

Woodland scene on the top of a cliff near the sea; in the foreground is a stone terminal figure hung with wreaths; on the left, in the distance is the seashore, with men launching a boat.

Historical significance: This painting is a preparatory study for an allegory of Spring in The National Museum of Western Art, Tokyo (P.1959-0146), dated 1865. This date provides a limit post quem this sketch could not have been made.
The present study shows a landscape with a seashore in the background, probably inspired by the cliff of Gréville near his hometown in Normandy, with in the foreground a statue of Pan adorned with wreaths of flowers and foliage. Compare with the finished version, the main characters Daphnis and Chloe, are missing. Daphnis and Chloe were two young lovers, whose story, a pastoral romance with a happy end, was narrated by the late Greek author Longus (2nd cent. A.D.?).
This is a very rare example of Millet's mythological paintings. Millet is actually best known for his rural scenes which depict 19th-century peasants' daily activities in beautiful landscapes infused with the brilliant light of Normandy's sky. Millet was one of the most authoritative exponents of the Barbizon school, an artistic movement that anticipated the Impressionism and derived somehow from the new interest for realism. 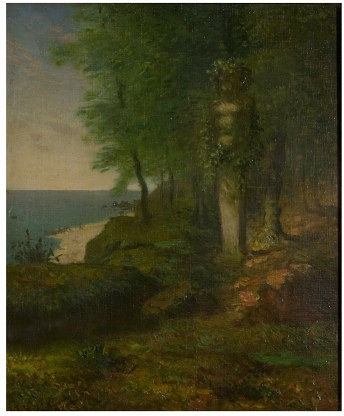