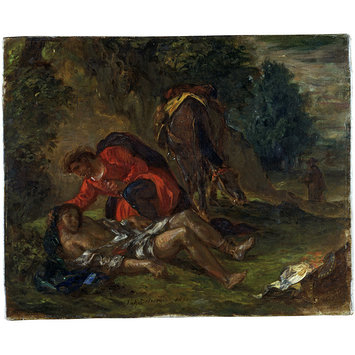 Delacroix was born near Paris but grown up in The Hague where his father was Ministre Plénipotentiaire. He first trained with Pierre Guérin (1774-1833) and then entered the Ecole des Beaux-Arts in Paris in 1816. He soon specialised in history and religious paintings while recognition from the public started with his debut at the Salon in 1822, which immediately heralded him as a major figure of the French school.

This painting depicts a scene from the Gospels, which tells the story of a Samaritan having compassion for a wounded traveller. This painting is a fine example of Delacroix's religious paintings of the 1850s, which show a rather dark palette, but were undeniably appreciated by the critics.

In the foreground, half-naked figure of a man lying on his back; over him stoops another male figure, who is wearing a red garment; behind them in the centre stands a dark-coloured horse. On the right are a heap of clothes, and a path on which are two figures; in the background are trees.

Historical significance: Delacroix painted two versions of the Good Samaritan, quite different in composition and spirit.
The present version, posterior in date, shows the Samaritan in the process of tending the wounded man while the other version, in the Waterhouse collection datable between 1850-51, depicts the subsequent moment when the Samaritan takes the wounded man on his horse to take him to an inn.
The subject matter is drawn from the Gospels (Luke, 10: 30-34), which tells the story of a traveller who fell among thieves and was wounded. Two men, first a priest and then a Levite, depicted here on the path in the middle distance, although representatives of the highest hierarchy in Palestine, passed by on the other side when they saw him but a certain Samaritan had compassion on him and acted charitably.
This painting was executed for the dealer Beugniet and is a fine example of Delacroix's interest for religious scenes, probably executed in his retreat at Champrosay, where he drew the preparatory study for the first version of the Good Samaritan (Musée du Louvre, Paris). CAI.63 appears however much more classical in composition, closer in style to Luca Giordano's own version of the theme (Musée des Beaux-Arts, Rouen).

The word Romanticism derived from the medieval term ‘romance’ and was first used by the German poets and critics August Wilhelm and Friedrich Schlegel to label a wider cultural movement beginning with the late 18th and ending towards the mid 19th century. Romanticism started first in Western Europe as a literary and philosophical movement and only gradually involved the other arts, explicitly around 1800. Romantic artists were fascinated by nature they interpreted as a mirror of the mind. They investigated human nature and personality, the folk culture, the national and ethnic origins, the medieval era, the exotic, the remote, the mysterious and the occult. The interest in the exotic and the non-Western, illustrated in France by such a painter as Eugène Delacroix (1798-1863), as well as the medieval revival, witnessed in England by Horace Walpole (1717-1797), are perhaps the most identifiable parts of Romanticism. It is really in the Post-Napoleonic period that this movement gained ascendancy. Its greatest proponents were among others Théodore Géricault (1791-1824) and François-René de Chateaubriant (1768-1848) in France, Joseph Mallord William Turner (1775-1851) in England, Heinrich Heine (1797-1856) and Caspar David Friedrich (1774-1840) in Germany. In the visual arts, it was largely played out by 1850, but in music it persists for another generation. 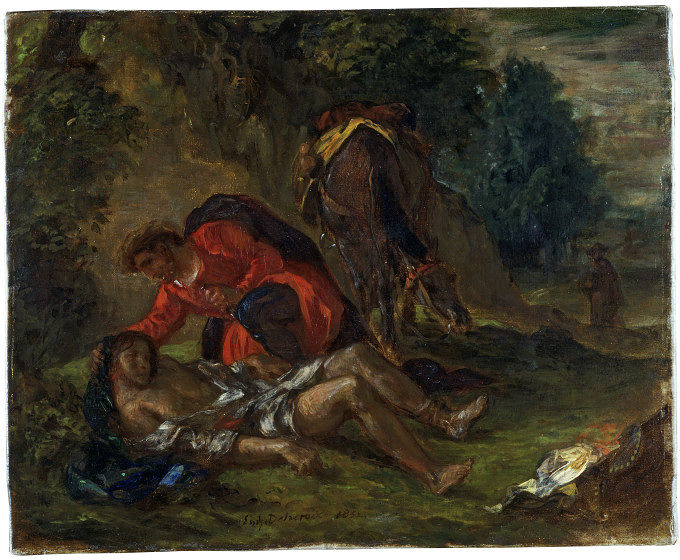