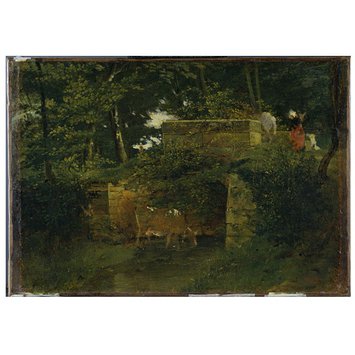 Pont de Batignies in the Forest of Compiègne

Théodore Rousseau (1812-1867) was born in Paris where he trained with his cousin, the landscape painter Alexandre Pau de Saint-Martin (1782-1850), and subsequently with Joseph Rémond (1795-1875). In spite of progressively emerging as the leader of the Barbizon school, Rousseau was systematically excluded from the Paris Salon between 1836 and 1841. Between the revolution of 1848 and the early 1860s, Rousseau enjoyed a short period of prosperity with official commissions and was eventually made Officer of the Légion d'honneur in 1867, a few months before he died.

This painting is a fine example of Rousseau's early painted sketches and was probably made when he was still a teenager. It depicts the bridge of Batignies, crossing over the small stream le Ru de Berne in the forest of Compiègne (North-Est of Paris). This painting anticipates Rousseau's interest for an objective rendering of nature and already shows his personal manner characterised by a free and broad brushwork, which would become the hallmark of his art and eventually of the Barbizon school.

Woodland scene: in the foreground a stream, in which a cow is drinking; a stone bridge above with a white horse followed by a woman wearing a red apron. Trees in the background.

oil on paper laid on canvas

Constantine Alexander Ionides bought CAI 56 for £240, from Hollander and Cremetti, on 26/02/1883 (cf. Ionides' manuscript inventory, private collection). He bequeathed the painting to the Museum in 1900.

Historical significance: This painting is a fine example of Rousseau's early manner. It has been identified with one of the work exhibited in the Cercle des Arts, Paris, 1867, organised by Hector-Henri-Clément Brame and Paul Durand-Ruel a year after they convinced Rousseau to sell them 70 sketches with which he had always refused to part.
The date that appears in the 1867 exhibition catalogue was, according to Hélène Toussaint from the Louvre (written communication, Feb. 1973), randomly chosen and the monogram 'TH.R' was added on this occasion. Hélène Toussaint also compared CAI.56 with other two compositions: the early Telegraph Tower on Montmartre (c. 1826 - Musée municipal, Boulogne), one of Rousseau's first painted studies, and Pierrefonds dans la forêt de Compiègne, Private collection. Should this sketch be executed at roughly the same time as the Télégraphe de Montmartre, we can then assume that it was made when Rousseau was still a teenager c. 1826.
The subject matter was identified as the bridge of Batignies in the forest of Compiègne and the composition was very likely made after the motif in plein-air. At that time, Rousseau was regularly taken by his cousin, the landscape painter Alexandre Pau de Saint-Martin (1782-1850) to work in the forest of Compiègne before he entered the studio of Joseph Rémond in c. 1826. 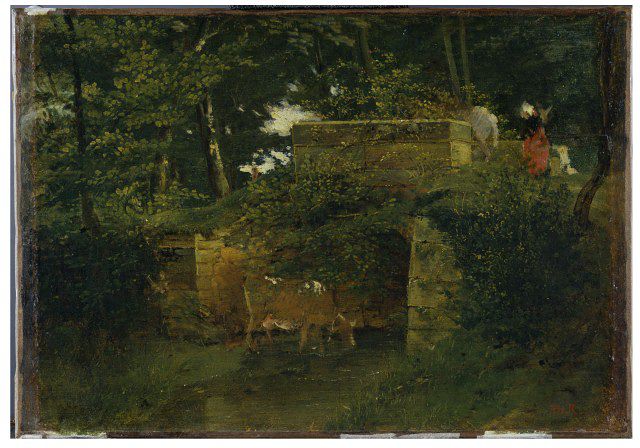