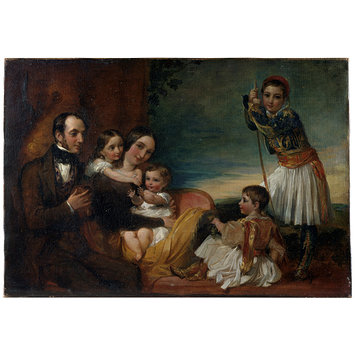 The Family of Alexander Constantine Ionides

This is a small version of a picture painted at the family home in Tulse Hill, south-west London. It depicts Alexander Constantine Ionides (1810-1890) and his wife Euterpe Sgouta, with their first four children. The two eldest boys are wearing Greek national dress. Constantine, the youngest boy, later became the benefactor of the V&A.

Group of six persons, all with brown hair and brown eyes. From the left they are arranged as follows: (1) Three-quarter length seated figure of a gentleman (Alexander Ionides, son of Nicolas Ionides) with whiskers, looking almost in profile to the right; he wears a brown coat, brown trousers and a pink and blue waistcoat; (2) a little girl (Aglaia Ionides, afterwards Mrs Coronio) hanging with her arms around her mother's neck; (3) the mother (Mrs. Alexander Ionides née Euterpe Sguta), dressed in brown looking toward the viewer and holding on her lap (4) a chubby baby (Alexander Ionides) seen almost full face. On the right in the foreground, seated in profile to the left, is (5) a little boy (Luke Ionides) in Greek costume; (6) another boy (Constantine Alexander Ionides) in Greek costume stands behind him leaning on a rod and looking towards the viewer. In the background on the left is a red curtain; on the right is a landscape.

Sketch painted at Tulse Hill / of Alexander Constantine Ionides / his wife & children by me / G. F. Watts
At the back of the frame there was formerly a small MS. label with this written on it (according to 1925 Ionides Catalogue)

35151
Number in pen and ink on back of frame, as revealed on 22/08/06 when grey paper backing that had previously covered whole back was removed in parts.

Bequeathed by Constantine Alexander Ionides, 1901. However, it was stipulated in the will that this, along with 19 other family portraits, should stay in the family until the death of his wife - she died in 1920 when the paintings were received by the museum.

A large version of the picture belongs to Mr Alec C. Ionides

Historical significance: George Frederick Watts was born on 23 September, 1817. He received no regular schooling on account of poor health, but later studied under the sculptor William Behnes and entered the R.A schools in 1835. In 1837 he achieved recognition for The Wounded Heron (Compton Watts Gal.), exhibited at the R.A. Watts won a prize of £300 for his painting Caractacus in the 1843 Westminster Hall competition. He went to Florence until 1847, where he worked under the patronage of Lady Holland. On his return to England, Watts won a further prize of £500 in the Westminster Hall competition for his Alfred inciting the Saxons to prevent the landing of the Danes. Inspired by Michelangelo and with his reputation now firmly established, Watts was determined to devote himself to grand, universal themes such as Faith; Hope; Charity; Love and Life; and Love and Death. However he rose to front rank as a portrait painter and painted of his many eminent contemporaries including Thomas Carlyle, John Stuart Mill, William Gladstone and John Everett Millais. He was elected to the A.R.A and R.A in 1867. In 1864 he married 16-year-old Ellen Terry and painted a charming allegorical portrait of her, Choosing, but the couple separated the following year. A major late sculpture, Physical Energy (1904, London, Kensington Gardens) is surprisingly modernistic. Watts presented many of his works to art galleries and institutions. He died on 1 July, 1904.

The painting is a smaller preparatory version of a magnificent group portrait (now in the Watts Gallery, Guilford, Museum No. COMWGMC.26) commissioned by Alexander Constantine Ionides (1810-90) from the still youthful and little known George Frederic Watts in the early 1840s. Alexander Constantine came to England in the 1820s, the second generation of a wealthy Anglo-Greek family of textile traders, and in 1833 he founded the firm of Ionides & Co. By the early 1840s, when the painting was made, the Ionides family was well advanced in building a large fortune. Alexander Constantine was an influential art patron and his substantial collection (now dispersed) included works by J. M. Whistler, Alfonse Legros, Henri Fantin-Latour, Dante Gabriel Rossetti, and Edward Burne Jones.
The painting shows Alexander Constantine and his wife Euterpe, with their four eldest children - Constantine Alexander (born 1833), Aglaia (born 1834), Luke Alexander (born 1837), and Alexander Alexander (known as Aleco, and who was born in 1840). Aglaia, who was eventually to inherit the painting after her father's death in 1890, is shown as the child who puts her arms around her mother's neck. Aleco, perhaps a year old when the painting was made, sits on his mother's lap. The two boys on the right of the composition are Constantine Alexander and Luke Alexander, the latter seated and offering an apple to his brother. These two figures wear Greek national dress, a motif clearly introduced to demonstrate the pride that the family took in their Greek ancestry and their deliberate identification with all things Hellenic (the costume worn by Constantine Alexander survives in the Royal Museum of Scotland in Edinburgh). Three years after Watts had painted the present family portrait Alexander Constantine and Euterpe's last child, a daughter named Chariclea (1844-1923), was born. The eldest son, Constantine Alexander, was a major art collector and his collection, which included this painting, was bequeathed to the V&A in 1901.

The decision to ask Watts to paint the family followed the birth of Alexander Constantine and Euterpe's fourth child Aleco in 1840, but was perhaps also prompted by their move from 9 Finsbury Circus in the city of London, where they had lived close to the Ionides business premises in Gracechurch Street, to a beautiful and richly furnished house at Tulse Hill near Dulwich. Ionides had also recently acquired British citizenship. Watts appears to have planned the present composition at the Ionides' new house, as the painting bears an attached label which states that it was 'painted at Tulse Hill / of Alexander Constantine Ionides / his wife &. children by me / G.F. Watts'. A larger version of the painting is now in the Watts Gallery.

The relationship between Alexander Constantine Ionides and George Frederic Watts had commenced when the latter had been asked to make a copy of a portrait by Samuel Lane of Constantine Ipliktzis (Alexander Constantine's father; see CAI 1140) a work which appeared at the 1837 Royal Academy. The copy was to be shipped to Constantinople to be hung in the family's business premises there. As Alexander Constantine affectionately recalled in a letter to Watts: 'I recollect as if it was yesterday my visit with Mr E. Riley to see a portrait of a little girl that you were painting when he recommended you for copying Lane's portrait of my father. Equally well your visit to my office, when you brought both original and copy, and I said at once to Mr G.F. Cavafy, who was present, that I preferred by far the copy, and that I was going to keep the copy and send the original to Constantinople. This was in the early spring of 1837. That Cavafy was quite startled at the novelty of my preferring a work for which I had paid £10 to one that had cost £63, and seemed quite incredulous' (M.S. Watts, George Frederic Watts, three volumes, 'The Annals of an Artist's Life', I, 1912, p.32). Alexander Constantine' s preference for the Watts replica marked the commencement of a long and affectionate friendship between the two men. 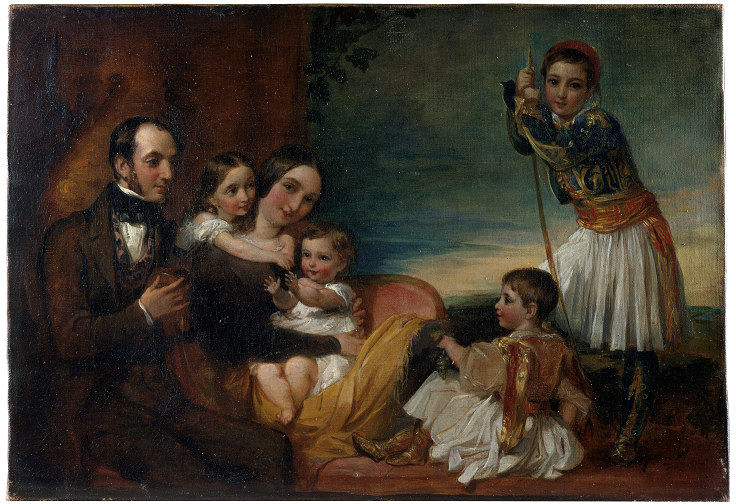