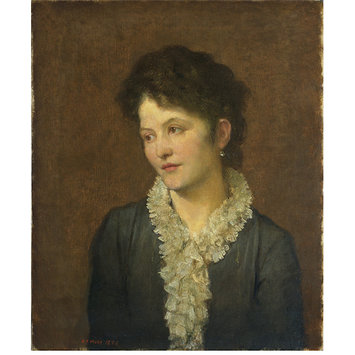 The sitter, Agathonike Fenerli (1845-1920), married Constantine Ionides in Constantinople in 1860. They had eight children. Although Watts was fascinated by grand historical and moral themes, he made his living from portraiture.

Half-length, three-quarter face portrait of a brown-eyed, brown-haired lady turnign and looking towards the viewer's left, in which direction her head is also slightly inclined. She wears a dark grey dress with a white frill. The background is brown.

G F Watts 1880
Signed at the bottom on the left

Historical significance: George Frederick Watts was born on 23 September, 1817. He received no regular schooling on account of poor health, but later studied under the sculptor William Behnes and entered the R.A schools in 1835. In 1837 he achieved recognition for The Wounded Heron (Compton Watts Gal.), exhibited at the R.A. Watts won a prize of £300 for his painting Caractacus in the 1843 Westminster Hall competition. He went to Florence until 1847, where he worked under the patronage of Lady Holland. On his return to England, Watts won a further prize of £500 in the Westminster Hall competition for his Alfred inciting the Saxons to prevent the landing of the Danes. With his reputation now firmly established, Watts was determined to devote himself to grand, universal themes, inspired by his study of Michelangelo, such as Faith; Hope; Charity; Love and Life; and Love and Death. However he rose to front rank as a portrait painter and painted of his many eminent contemporaries including Thomas Carlyle, John Stuart Mill, William Gladstone and John Everett Millais. He was elected to the A.R.A and R.A in 1867. In 1864 he married 16-year-old Ellen Terry and painted a charming allegorical portrait of her, Choosing, but the couple separated the following year. A major late sculpture, Physical Energy (1904, London, Kensington Gardens) is surprisingly modernistic. Watts presented many of his works to art galleries and institutions. He died on 1 July, 1904.

Agathonike Ionides (1845-1920) was the wife of Constantine Alexander Ionides, who bequeathed his extensive collection of paintings, prints, drawings and etchings to the V&A museum. In this three-quarter face portrait she tilts her head to her left, wearing a simple black dress with lace collar against a plain brown background. Like the portrait of her husband (CAI 1141), the painting uses a palette of neutral shades. Constantine Alexander was a lifelong friend and patron of Watts, who painted many portraits of the Ionides family, including a portrait of Constantine Alexander (CAI 1141) in the same year as this portrait of his wife, and portraits of his three daughters (CAI 1143, CAI 1144, CAI 1145) the following year. Agathonike (c.1844-1920) was the daughter of Constantine Fenerli at Constantinople. The couple married in 1860 and they had three daughters and five sons. In 1864 they settled in England, living for almost thirty years at 8 Holland Villas Road, Kensington. When Agathonike died in 1920, a collection of 20 Ionides family portraits entered the V&A museum. 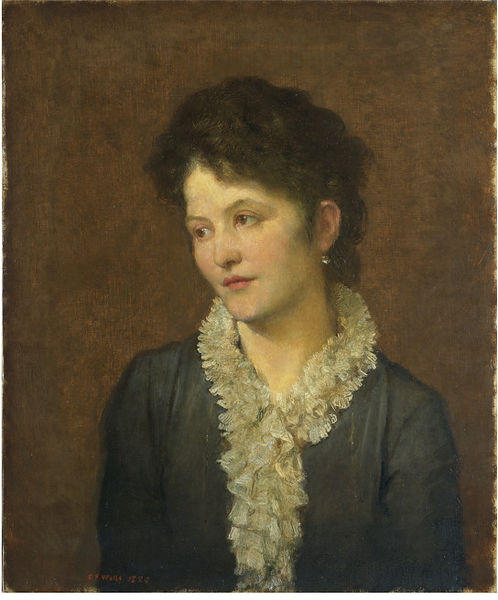