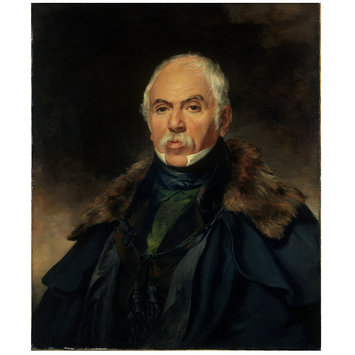 The Greek textile merchant Constantine Ioannou (1775-1852) was the founder of the English branch of the family. His son, Alexander Constantine Ionides, commissioned the original portrait by Lane and also the copy from Watts, who was then unknown as a painter.

Half-length, nearly full face portrait of an old gentleman with brown eyes and white hair. He turns very slightly to the left and looks towards the spectator. He has small white whiskers, grey eyebrows and a white moustache. He wears a black stock, a green waistcoat, a brown coat and a black cloak with brown fur collar. The background is painted chiefly with various tones of brown.

Constantine Ionides / a copy made by me for A.C. Ionides / G.F. Watts / First work done for the Ionides family -
small MS. label on the back of the stretcher.

Commissioned from the artist by Alexander Constantine Ionides in the early spring of 1837 for £10; by descent to Constantine Alexander Ionides, by whom bequeathed in 1900 (see below)

Historical significance: George Frederick Watts was born on 23 September, 1817. He received no regular schooling on account of poor health, but later studied under the sculptor William Behnes and entered the R.A schools in 1835. In 1837 he achieved recognition for The Wounded Heron (Compton Watts Gal.), exhibited at the R.A. Watts won a prize of £300 for his painting Caractacus in the 1843 Westminster Hall competition. He went to Florence until 1847, where he worked under the patronage of Lady Holland. On his return to England, Watts won a further prize of £500 in the Westminster Hall competition for his Alfred inciting the Saxons to prevent the landing of the Danes. With his reputation now firmly established, Watts was determined to devote himself to grand, universal themes, inspired by his study of Michelangelo, such as Faith; Hope; Charity; Love and Life; and Love and Death. However he rose to front rank as a portrait painter and painted of his many eminent contemporaries including Thomas Carlyle, John Stuart Mill, William Gladstone and John Everett Millais. He was elected to the A.R.A and R.A in 1867. In 1864 he married 16-year-old Ellen Terry and painted a charming allegorical portrait of her, Choosing, but the couple separated the following year. A major late sculpture, Physical Energy (1904, London, Kensington Gardens) is surprisingly modernistic. Watts presented many of his works to art galleries and institutions. He died on 1 July, 1904.

Constantine Ipliktzis, or Constantine Ionides, (1775-1852) was a Greek textile merchant and the grandfather of Constantine Alexander Ionides (1833-1900), whose collection was bequeathed to the V&A in 1900. Here he is shown as a dignified elderly gentleman in a black cloak with fur collar. In 1815, Constantine Ipliktzis came to England with a view to exporting Manchester cloth to Greece and Turkey and established a branch of his textile firm in London. Constantine was famous in Athens for his charitable endowment of schools, universities and hospitals. He was married to Mariora Sendoukaki (CAI 1139), and the couple had eleven children. In 1827 Constantine’s fourth son, Alexander, settled in Manchester and changed his name to Ionides (Ion was the mythical ancestor of the Ionians; hence Ionides simply means ‘the Greek’) and founded the firm of Ionides & Co. in 1833, trading in textiles and wheat with the Balkans and near East. The family moved to London in 1834, living first at 9 Finsbury Circus, and subsequently Tulse Hill and 1, Holland Park. Alexander Constantine became Greek consul in London 1854-66, and was the friend and patron of several noted artists, including George Watts, James Abbott McNeill Whistler and Dante Gabriel Rossetti.

The painting is a copy of an original portrait of Constantine Ionides painted several years earlier by Samuel Lane and shown at the 1837 Royal Academy. In about 1840, Constantine’s son Alexander Constantine commissioned the young G. F. Watts to make this copy for £10, in order that it could be sent to a school founded by Constantine Ionides at Piraeus in Athens. Watts’ painting was so widely admired, however, that the original by Lane was sent to Athens instead, and the copy remained in England. As Alexander Constantine recalled in a letter to Watts, ‘I recollect as if it were yesterday my visit with Mr. E. Riley to see a portrait of a little girl that you were painting when he recommended you for copying Lane’s portrait of my father. Equally well your visit to my office, when you brought both original and copy, and I said at once to Mr G. F. Cavafy, who was present, that I preferred by far the copy, and that I was going to keep the copy and send the original to Constantinople. This was in the early spring of 1837. That Cavafy was startled at the novelty of my preferring a work for which I had paid £10 to one that had cost £63, and seemed quite incredulous’ (M.S Watts, George Frederic Watts, 3 vols., ‘The Annals of an Artist’s Life’, I, 1912, p. 32). The copy was Watt’s first commission for the Ionides family and it marks the commencement of a lifelong friendship between the two men, in the course of which Watts painted five generations of the family. The portrait was received into the museum in 1920 on the death of Constantine Alexander Ionides’ wife, Agathonike. 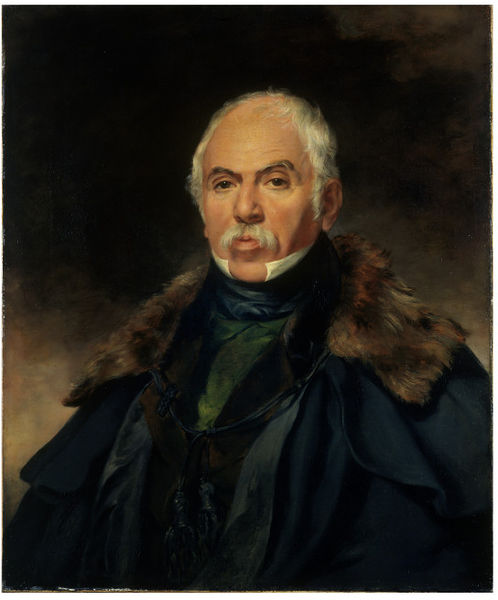