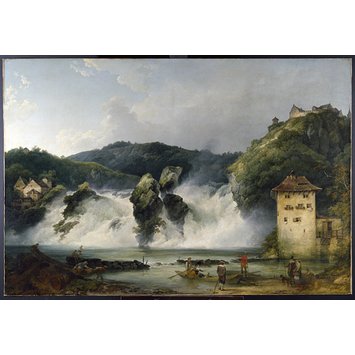 The Falls of the Rhine at Schaffhausen

De Loutherbourg was born in Strasbourg and settled in London in 1771. This view dates from a visit to Switzerland in 1787 to 1788. It depicts visitors and locals admiring a waterfall, the largest in central Europe, near Zurich. A critic mistook the scene for the River Nile and complained that 'The agitation of the waters…resembles soap-suds'.

Re: date of picture. See The Burlington Magazine, Vol CXIV, Number 833, August 1972, "The Date of Loutherbourg's 'Falls of the Rhine at Schaffhausen'" by Jack Henry Kunin.

'P I de Loutherbourg'
Signed by the artist

According to Jack Henry Kunin, 'The Date of Loutherbourg's "Falls of the Rhine at Schaffhausen"' (The Burlington Magazine, Vol. CXIV, no.833, 1972), this painting was incorrectly dated to about 1775 in the catalogues of three important exhibitions of British art; Romantic Art in Britain; Royal Academy of Arts Bicenteneary Exhibition: 1768-1968; La Peintrue Romantique Anglaise et Les Préraphaelites (see References) In this article Kunin addresses evidence for dating the painting instead to 1787-8, and for its exhibition at the Royal Academy in 1788 (no. 227). Kunin explains that in the catalogue for that year, no.227 had no accompanying title, probably because de Loutherbourg submitted his painting late. Kunin cites a newspaper critic who apparently misheard the title, and described it consequently as A view of the Cataract of the Nile. Algernon Graves in turn used to incorrect description to supply the gap in the original catalogue in his list of the work of RA exhibitors. The critic wrote, "This picture, which did not arrive in time to grace the opening of the room, was yesterday added to the exhibition... It is, we understand, a view of the Cataract of the Nile...". According to Kunin this was painted during de Loutherbourg's first documented visit to Switzerland, from June 1787 to January 1788. He went there to join Count Cagliostro with whom he had studied alchemy in London, but the two quarrelled and parted company. After this de Loutherbourg undertook excursions, including to Schaffhausen. He refers in a letter to his painting of a great picture of the falls of the Rhine. It seems likely that this is the picture in the V&A as Kunin notes it is topographically accurate apart from the element described by the unknown critic in 1788. Although re-dating the work alters its relationship to other Alpine images that are now seen to be earlier, Kunin concludes, "the monumentality of Loutherbourg's representation of the waterfalls assures the painting a place of importance in the development of the sublime landscape in Britain".

De Loutherbourg was in many ways a precursor of the romantic mood in his subject matter, which often represented the dangers of nature and disasters brought about by man's vulnerability in the face of the elements. This picture of the great falls at Schaffhausen, on the Rhine in Germany, is in many ways a response by de Loutherbourg to this taste for the Sublime, for images of the immensity and often overwhelming power of nature. However, he has tempered the violence of the falls by including figures in the foreground who, protected in their little inlet, calmly fish, or genteelly paddle about in the safety of the shallows, dressed in their best clothes.

Oil painting, The Falls of the Rhine at Schaffhausen', Philip James de Loutherbourg, 1788 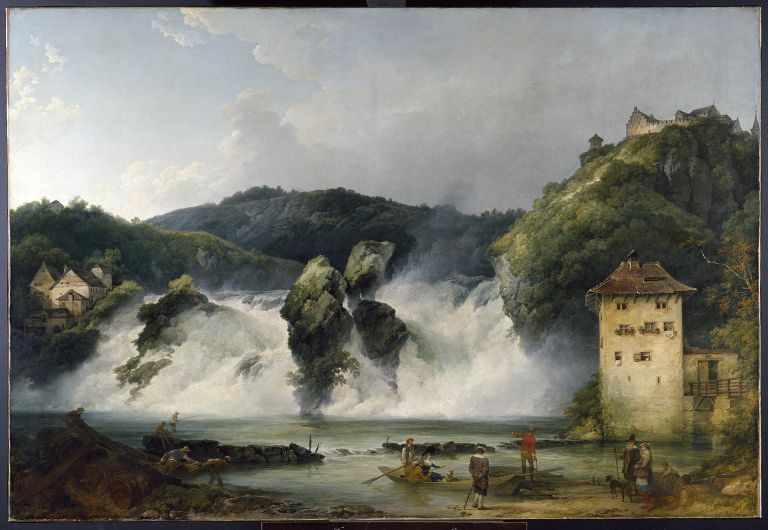