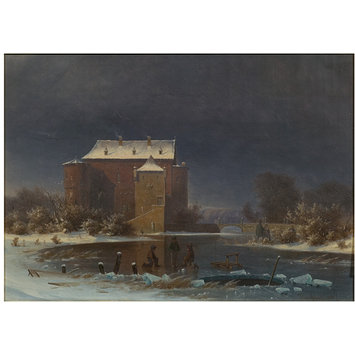 This painting is a fine example of the Romantic imagery which developed in Northern Europe in the 19th century and favoured mysterious landscape characterised by a high degree of finish as well as clear and cool tonality. It shows a frozen river on which are playing three boys and an austere manor in the mid-distance. Dated 1847, this composition was made shortly after Libert went to Munich where sojourned a group of Romantic painters under the influence of Caspar David Friedrich. This type of compositions was quite popular and attracted the collectors' interest during the second half of the century.

A frozen river on which are playing three boys and an austere manor in the mid-distance, two small figures standing on the edge of the river at right, trees and distant mountains in the background.

Historical significance: This painting is an early and smaller version of a composition made in 1848 in Munich (see 1573-1869). It is unclear whether 1571-1869 was a preparatory study for the larger painting or a previous version of a composition that proved popular. This painting is darker in tones than 1573-1869.
This landscape, which combines a genre scene reminiscent of the 17th-century Dutch wintry compositions, and a landscape, is a typical example of the mysterious albeit harmonious paintings favoured by Scandinavian artists under the influence of the German David Caspar Friedrich (1774-1840) and his pupil the Norwegian Johann Christian Dahl (1788-1857), with whom he may have been in contact when he came to Munich in 1845-46.
The high degree of finish and clear tones along with an interest in atmospheric effects such as the sunset light are characteristic of the Romantic movement. The Romantic artists focused on the fragility of humankind against the omnipotent nature, which is here well illustrated by the boys playing on the frozen river under a wide stormy sky.
This painting was bequeathed by the Rev. Townshend who owned a large collection of 19th-century landscape and genre paintings. 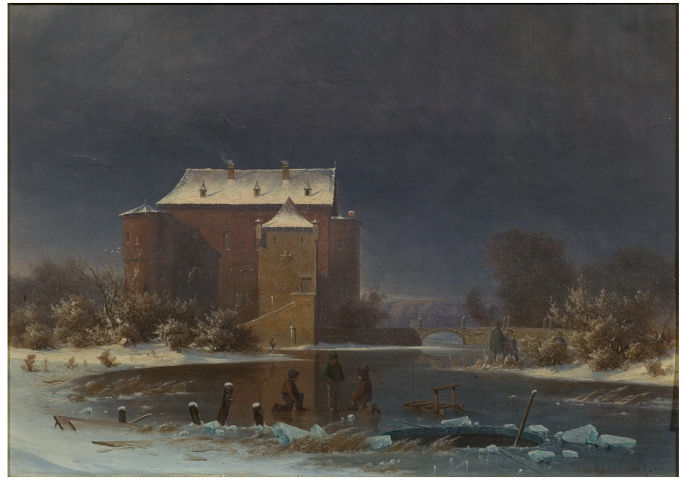