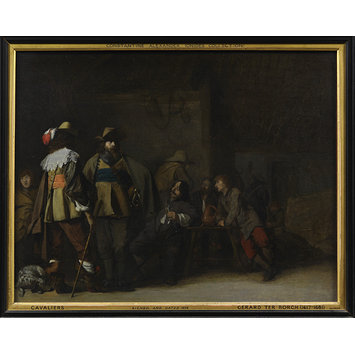 Gerard Ter Borch (1617-1681) was first trained by his father Gerard Ter Borch the Elder before going to Amsterdam in 1634 as an apprentice to the landscape painter Pieter Molijn (1595-1661). He joined the Haarlem Guild of St Luke in 1635 and soon went travelling in Europe until the early 1640s. He then moved to Deventer where he settled definitively at the end of the 1640s. He made few historical subjects and produced chiefly scenes of everyday life including scenes of skaters, soldiers and markets, high-life interior subjects and portraits. His genre paintings had a considerable influence on such contemporaries as Gabriel Metsu, Pieter de Hooch, Frans van Mieris and Johannes Vermeer. He had many pupils among which the most eminent was Caspar Netscher and his oeuvre was extensively copied.

This painting shows a guardroom scene with cavaliers and peasants resting in a domestic interior or a tavern. Unlike many Dutch painters who depicted soldiers, Ter Borch was familiar with them from personal experience. His native city, Zwolle and Deventer where he permanently settled in 1654 both housed garrisons because they were situated along the strategic defence lines established during the war with the Spanish. The date inscribed on the painting by a probable later hand, 1638, is consistent with the style of the painting but at that time, Ter Borch was still travelling in Europe. He most likely executed this painting during the early 1640s, once he was back in the Netherlands and witnessed the end of the Thirty Years War (1618-1648).

A guardroom scene with cavaliers and peasants resting in a domestic interior or a tavern.

'GT [monogram] Borch, 1638'
Inscribed; the signature and date appear to have been added by another hand in the 19th century.

Historical significance: Ter Borch was one of the most accomplished painters of 17th-century Holland, enjoying a considerable reputation in his own day. From the 1640s he contributed to the development of a new genre type, showing simplified interiors with a few figures in an upright format. This composition became an important format for the second half of the 1600s. Early exponents of this new style are the so-called guardroom scenes such as the present one which are set in simple interior with full-length figures and are characterized by great refinement in the handling of colour, light, and texture and also by a subtle psychological interplay. This trend followed the manner of Amsterdam painters such as Pieter Codde (1599-1678) and Willem Duyster (ca.1598-1635) but Ter Borch introduced a new subtlety of light and naturalism.

Genre painting involving low class society, especially peasants but also as the decades progressed and the demand for such pictures evolved more elevated class exponents, became more and more popular throughout the 17th century in the Netherlands. These pictures usually depict scenes of everyday life set in domestic interiors or in the countryside. Scholars are still debating whether they bear a metaphorical meaning and hidden messages, or just feature a close depiction of contemporary events. In both case they are associated with health, pleasure and liberty. Dutch genre painting is also closely related to popular literature and culture, of which proverbs form a very important element. Amsterdam occupies a central place in the history of Dutch genre painting as the city attracted provincial painters from all over the country. However the demand for these pictures was intense and the category developed in almost every well known town (Leiden, Delft, Haarlem, Utrecht and The Hague). The chief leading figures of genre painting in Holland were Jan Steen (1626-1679), Frans van Mieris (1635-1681) and Gerard Ter Borch (1617-1681). Derivative artists like Richard Brakenburgh (1650-1702), Willem van Mieris (1662-1747) and Matthys Naiveu (1647-1726) survived to continue the tradition of genre painting into the eighteenth century. 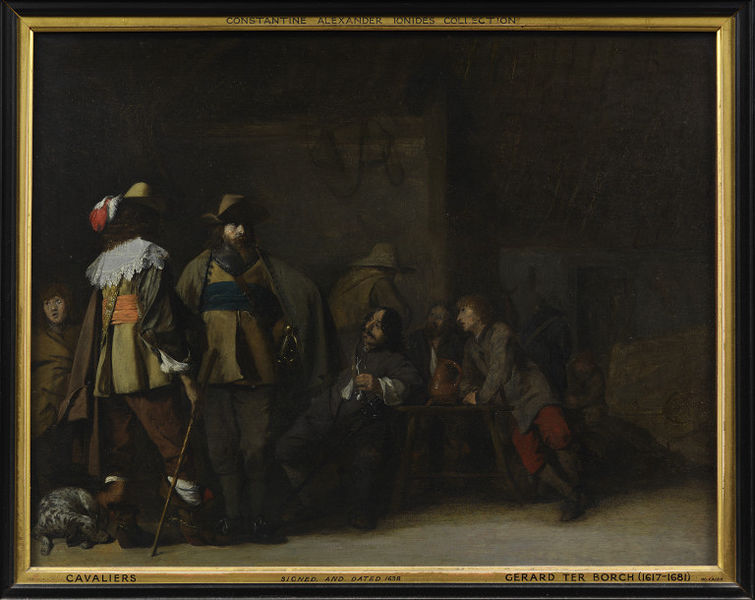