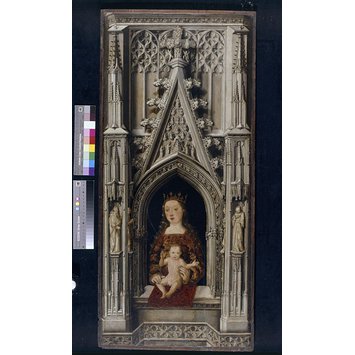 The Virgin and Child in a Gothic architectural setting

This painting is a good example of the Hispano-Flemish style of the late 15th century in Spain. Probably executed in Seville, this work shows the Virgin and Child set in an architectural frame which derives from the decoration of the doors of the Cathedral of Seville. The dominant feature of this frame is the acanthus leaves which runs all along the different sections while the Madonna, with a round face and long curly hair, and the Child are reminiscent of Flemish prototypes. The importance of the architectural frame compared with the Madonna and Child suggest this piece was part of large ensemble.

Nothing is known of the provenance of this panel before it was purchased from Sr Zuloago in Madrid in 1866.

Historical significance: Dr August L. Mayer (written communication, 1936) thought this work was from the school of Toledo whereas Chandler Post (1938) ascribed it to the school of Seville and it was subsequently tentatively catalogued as by Pedro Sanchez I (Gaya Nuno, 1936 and Kauffmann, 1973). This attribution relies upon the only surviving panel by Pedro Sanchez I - Entombment dated ca. 1490, Szépmûveszeti Museum, Budapest - however this painting shows a much more sculptural and harsh execution which differs quite substantially from 335-1866.
The painting shows a Madonna and Child set in a Gothic architectonic frame. The support being chestnut and the fact that it was bought on the Madrid art market indicate the painting is probably Spanish, more specifically from the school of Seville as the Gothic frame surrounding the Virgin and Child derives from the decoration of the doors of Seville cathedral and yet is not a direct copy. The architectural elements recall indeed the doors of S. Miguel and of the Bautismo, constructed before 1454 and located in the west front of the cathedral. The Madonna and Child are set within a pointed arch with free standing figures on each side, which differs from the doors’ sculptures. On the right is perhaps St Anthony Abbot whose traditional attribute is a tau-shaped (T) stick. The other figures of the buttress are hardly identifiable but resemble stereotypes of doctors and fathers of the Western church. Three of them are reading like those of the doors of the Bautismo, and the fourth is represented looking to the top as the Saint John of S. Miguel’s doors. Some of these sculptures were paid to Lorenzo Mercadante de Bretana the years 1464-67.
Above the Virgin and Child a carved ‘tree of Jesse’ is represented. It rises from the enthroned figure of Jesse while on the branches appear the ancestors of Christ. It culminates with the Virgin holding the Child, standing on a crescent moon. The theme occurs in the Middle Ages and in the early Renaissance, especially in the Netherlands. All along this ‘window of Jesse’ run acanthus leaves and grapes, dominated by a cross surmounted by a human figure intertwined with a dragon, a common illustration of the victory of good over evil.
The architectural frame on one hand and the Virgin and Child on the other may result from the work of two different painters as their execution looks quite dissimilar. In fact the Virgin and Child do not appear as refined and neat as the rest of the painting. Her dress however, embroidered with a pattern of acanthus leaves, recalls the dominant feature of the frame. It is therefore rather difficult to identify a painter responsible for this work. According to Iniguez, there is a remote influence of Juan Sanchez de Castro and of the master of the Ordones Militares, especially in the form of the Virgin face.
This type of composition of a Madonna and Child enclosed within a gothic architectonic frame is quite recurrent in Flemish examples such as Roger van der Weyden’s two Enthroned Virgin and Child, Museo Thyssen-Bornemisza, Madrid (Inv. 435(1930.125)) and Kunsthistorisches Museum, Vienna (Inv. GG_951). Moreover in these pictures, the Virgin has long and curly fair hair and wears a crown. This painting appears therefore a good example of the Hispano-Flemish type of painting typical of the last quarter of the 15th century. However the importance of the architectural elements is quite unusual and suggests this painting was part of a large ensemble.

Oil on chesnut, The Virgin and Child in an elaborate Gothic architectural setting, Seville school, ca. 1500 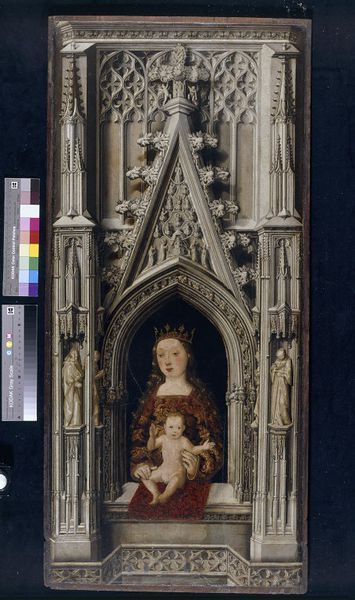