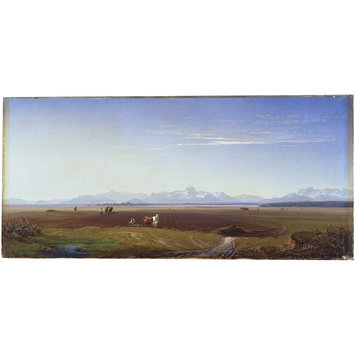 Schleich trained in Munich as a history painter, but soon began to paint landscapes of his native Bavaria. Here the small figures of ploughmen labouring on the wide plain before a distant mountain range evoke a mood of quiet melancholy.

Rev. C. H. Townshend. Listed in the 1868 post-mortem register of the contents of Townshend's London house (V&A R/F MA/1/T1181) in 'the Fossil and mineral room' as by E. Schleich; Bequeathed by Rev. Chauncey Hare Townshend, 1868.

By 1851 Schleich increasingly depicted panoramic views, with elongated proportions between 1:2 and 1:3; a choice of format perhaps related to panoramic photographs which he could have seen at the Great Exhibition of 1851. This characteristic, and the sharp focus of his landscapes may have been especially congenial to the Rev. Chauncey Hare Townshend, who was also a major early patron of landscape photography.

Eduard Schleich (1812-74) studied at the Munich Academy, and privately. He was initially influenced by the landscape style of Carl Rottmann (1797-1850) and Christian Morgenstern (1805-1867, and painted clear and simple mountain landscapes of Upper Bavaria and the Tyrol, conditioned by his study of 17th century Dutch landscapes. In 1851 he visited Paris with Karl Spitzweg in 1851, where he was impressed at the Salon by the works of the Barbizon School, and London, where he visited the Great Exhibition and encountered paintings by John Constable and Richard Parkes Bonington. Subsequently he settled in Munich and became one of the leading landscape painters of the Munich school. The figures in his landscapes were often added by friends, such as Friedrich Voltz (1817-86).

The term ‘Biedermeier’ refers to bourgeois life and art in Germanic Europe, an extensive area embracing such cities as Copenhagen, Berlin, Vienna and Prague, from 1815 (the Congress of Vienna) to the revolutions of 1848. Biedermeier painters were ideologically opposed to academic and religious painting and favoured such subject matter as portraits, landscapes and genre scenes, with still-lifes, especially of flowers. They share a similar technique in the use of separate, clear tones and a high degree of finish, reminiscent of Neo-Classicism while they tend to convey a greater sentimentality. By the 1880s, the influence of this artistic movement was on the wane and was even used pejoratively to characterize the reactionary bourgeois elements in society, which remained quite indifferent to social problems and cultivated a sense of order and sobriety, especially in the private sphere and the domestic realm.