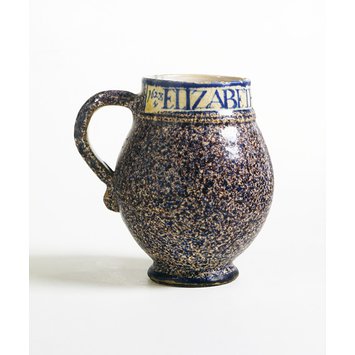 Object Type
The shape of this mug is entirely typical of coarse earthenware ale or beer mugs made in England towards the middle of the 17th century. The handle is effective rather than elegant.

People
We know nothing about the person for whom the mug was made. But, in view of the fact that England was highly centralised and that London-made delftware was mainly aimed either at a local market or at the colonies in North America, we may assume that the recipient was a Londoner. It is yet another example of the remarkable survival of a treasured family possession - one with no intrinsic value whatever.

Design & Designing
One of the big advantages of tin-glazed earthenware ('delftware') over other forms of pottery, and the main reason for it being used for pharmacy jars, was its ability to carry painted inscriptions. Here the decorator has laid damp paper over the area of white tin-glaze to be inscribed, and then sprinkled powdered manganese over the rest of the mug to simulate the mottled appearance of German salt-glazed stoneware. The name was then added in cobalt blue.

Tin-glazed earthenware mug of bulbous form with a handle, two raised rings on the neck. Speckled blue and manganese-purple. There is a blue line around the rim and around the foot. A white panel below the rim is inscribed '1628 ELIZABETH BROCKLEFIELD' in blue. The inside is white.
Body colour: Mid buff.
Glaze: Dull white.
Shape: Underside unglazed, slightly concave, without foot-rim. Handle sharply rounded on outside, flat on inside with rounded terminal. Prominent turning grooves on the interior. Two raised rings on the neck.

Made at the Southwark, Montague Close or Pickleherring factory, London

Probably made to celebrate a christening

Historical significance: This is the earliest known dated mug. The fashion for speckled manganese-purple grounds with bands enclosing an inscription in blue continues into the late seventeenth century. Excavated fragments show that this from of decoration was in use at numerous potteries in London, Brislington and Bristol.

It seems probable that this mug was made to celebrate a christening.

The cosmopolitan style of early English tin-glazed earthenware reflects the fact that the technology for making it came to England via The Netherlands. The powerful image on the dish, La Fecondit‚ (Fruitfulness), was taken from a design by the French potter Bernard Palissy (1510-1590), while the hugely popular 'bird-on-rock' design came from Chinese export porcelain. Occasionally, soft and brittle tin-glazed earthenware mugs or bottles even imitated the speckled appearance of much tougher German stonewares. [27/03/2003]

The only potteries in existence in London in 1628 were Montague Close and Pickleherring. 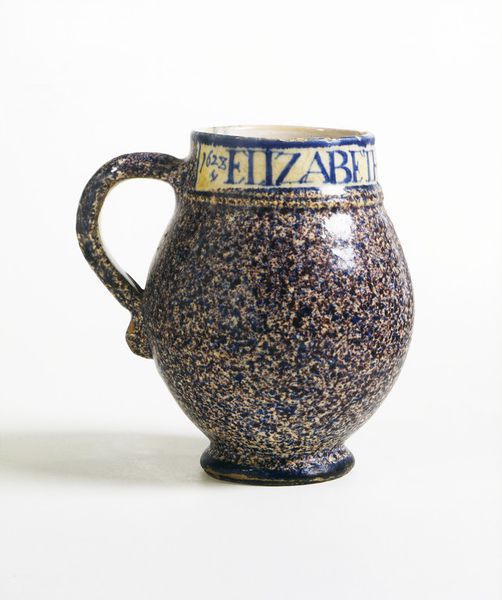