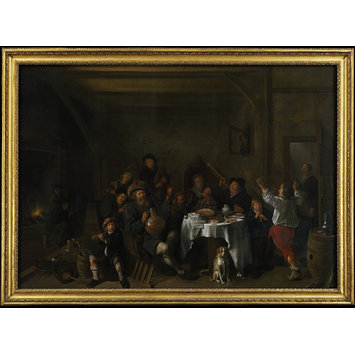 Jan Miense Molenaer (1610-1668) was born in Haarlem and his very colourful genre paintings of the first half of his career suggest that he trained with Frans Hals (ca.1581-1666) in Haarlem. In 1636, he married the Haarlem genre painter Judith Leyster (1609-1660) with whom he moved to Amsterdam in the same year. During the 1630s and the 1640s, Molenaer painted a wide range of subjects from genre, portraiture and history pictures. From the 1640s, he specialised exclusively in low-life genre revealing the influence of Adriaen van Ostade (1610-1685). He was also a prolific draughtsman and made few prints.

This painting shows a merrymaking family of peasants, a genre painting in which Jan Miense Molenaer specialised when he moved with his wife, the talented Haarlem painter Judith Leyster, to Amsterdam. His increasing output of such genre paintings is most likely a response to the local art market that had a void in this field left by the death of David Vinckboons (ca. 1576-1632), an Amsterdam painter of such themes, and by the maybe too numerous portrait and history painters led by Rembrandt.

A domestic interior in which a peasants family drink, eat and entertain themselves with music. In the centre, is a table covered by a white linen on which food items had been displayed, before it is a dog and two men on the far left are lighting their pipes by the fireplace.

'J. Molenaer'
Signed by the artist on barrel, lower right

Historical significance: This painting is one of the many humorous tavern or domestic interiors painted by the Haarlem master Jan Miense Molenaer. The earthy tonality of the whole painting, enlivened by the dancing boy's red pants on the right, echoed in the bearded man's hat in the centre, is typical of the second half of Molenaer's career when the influence of Frans Hals started to lessen. He then developed a restrained palette and focused on low-life genre paintings, reusing the same setting in other pictures. For instance, a merry company painting in the Rijksmuseum, Amsterdam, shows a very similar setting and composition depicted in an almost monochrome palette. The only difference lay in this people's entertainment which is in this case playing cards rather than music.
This painting is a good example of Molenaer's typical production and more broadly of Haarlem artistic specificity that developed since the beginning of the 17th century a greater naturalism and from which result an important part of the Dutch genre painting.

Genre painting involving low class society, especially peasants but also as the decades progressed and the demand for such pictures evolved more elevated class exponents, became more and more popular throughout the 17th century in the Netherlands. These pictures usually depict scenes of everyday life set in domestic interiors or in the countryside, including battle scenes and merry company pictures. Dutch genre painting is also closely related to popular literature and culture, of which proverbs form a very important element. Amsterdam occupies a central place in the history of Dutch genre painting as the city attracted provincial painters from all over the country. However the demand for these pictures was intense and the category developed in almost every well known town (Leiden, Delft, Haarlem, Utrecht and The Hague). The chief leading figures of genre painting in Holland were Jan Steen (1626-1679), Frans van Mieris (1635-1681) and Gerard Ter Borch (1617-1681). Derivative artists like Richard Brakenburgh (1650-1702), Willem van Mieris (1662-1747) and Matthys Naiveu (1647-1726) survived to continue the tradition of genre painting into the eighteenth century however in the second half of the century, there was a discernible shift in the art. The accent moved to the human aspect of the picture and painters were no longer interested in the hidden meaning some of these pictures could enclose. The motifs of Adriaen van Ostade or David Teniers the Younger reappeared then in civilised form and the great masters of the preceding century (from Veermer, Gabriel Metsu and Gerard Ter Borch) inspired such artists as Adriaan de Lelie (1755-1820) and Wybrand Hendricks (1744-1831) who however could not produce anything else than a sincere expression of their own time. 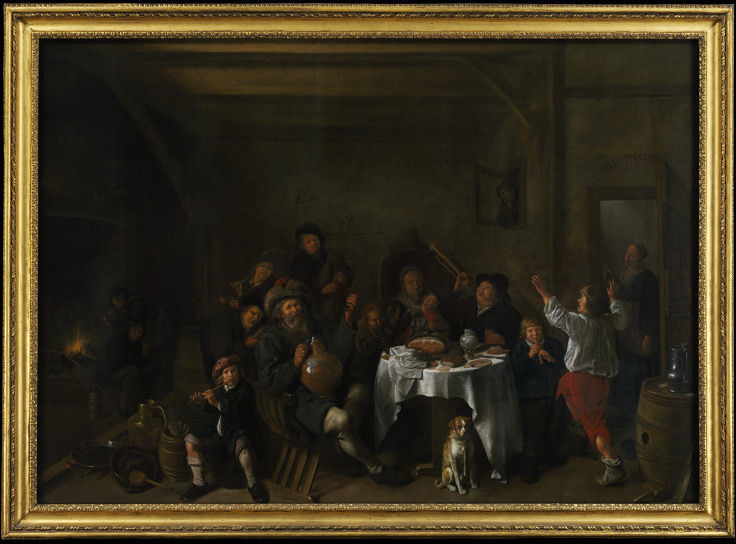