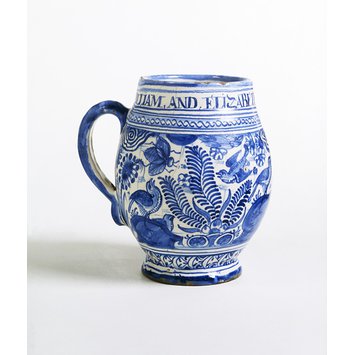 Object Type
The maker of this mug has adopted one of the simplest forms of ceramic mug, a swelling barrel-shape with heavy handle. Before the introduction of hot drinks such as coffee and tea in the 1650s, such mugs were used for any type of liquid - beer, cider, even water. With its inscription and date, this piece may have been a christening mug.

Design & Designing
Such a plain form suits the coarse and soft earthenware, which needs to be thick to be sufficiently strong. Also, this forms provides the maximum surface area for decoration, and for the dedication around the rim.

People
Christian Wilhelm, in whose Pickleherring Quay factory at Southwark this mug was probably made, had moved into pottery making after dealing in cobalt (the blue mineral colour used for dyeing textiles as well as painting ceramics). It was natural therefore that his early products should be mainly blue and white. Yet it is worth noting that much early delftware made in London by Dutch immigrants was plain white. Unlike the painted and inscribed pieces, those cheap and popular tablewares have virtually all disappeared.

Tin-glazed earthenware mug, bulbous in form, it has one handle with a rounded terminal. It is painted with geometric decoration and Chinese Wanli-derived 'birds-on-rocks', flowers and insects in blue. It is inscribed 'WILLIAM AND ELIZABETH BURGES 24th AUGUST 1631' below the mouth and '1632' beneath the terminal of the handle.

Body colour: Dark buff.
Glaze: White.
Shape: Underside glazed except at outer edge, concave without foot-rim. Handle is flat or slightly concave on inside, rounded on the outside with rounded terminal. Prominent turning grooves on the interior.

Acquired by the Museum of Practical Geology before 1871. Transferred, 1901.

The cosmopolitan style of early English tin-glazed earthenware reflects the fact that the technology for making it came to England via The Netherlands. The powerful image on the dish, La Fecondit‚ (Fruitfulness), was taken from a design by the French potter Bernard Palissy (1510-1590), while the hugely popular 'bird-on-rock' design came from Chinese export porcelain. Occasionally, soft and brittle tin-glazed earthenware mugs or bottles even imitated the speckled appearance of much tougher German stonewares. [27/03/2003]

This mug has typical 'birds-on-rocks' decoration of the kind used in Southwark and Rotherhithe. There does not appear to be any obvious explanation for the two dates other than that the piece was made at the turn of the year. The only potteries in production at the time were Montague Close and Pickleherring. 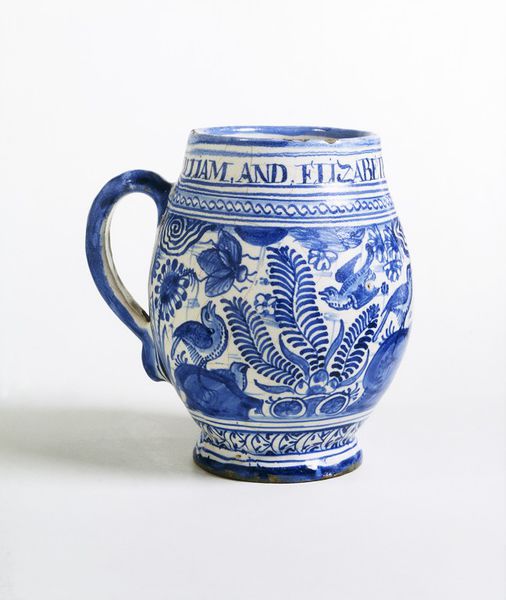