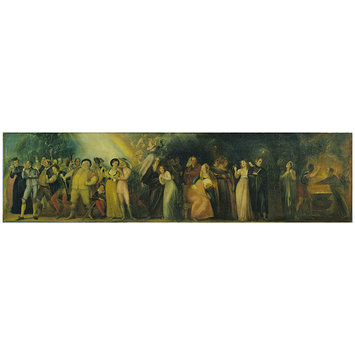 Oil on panel depicting, from left to right: Olivia, Malvolio, Sir Toby Belch and Sir Andrew Aguecheek from Twelfth Night; Falstaff, Celia and Rosalind from As You Like It; Prospero and Miranda from The Tempest; King Lear and Cordelia; Ophelia and Hamlet; and Lady Macbeth and the witches. The work is signed and dated 1812.

'Thos Stothard 1812'
Signed and dated by the artist

This painting depicts, from left to right: Olivia, Malvolio, Sir Toby Belch and Sir Andrew Aguecheek from Twelfth Night; Falstaff, Celia and Rosalind from As You Like It; Prospero and Miranda from The Tempest; King Lear and Cordelia; Ophelia and Hamlet; and Lady Macbeth and the witches. The work is unusually signed and dated 1812.

A review of the Sheepshanks Collection in The Art Journal, 1857, (p.240) was critical of this painting, "... each impersonation speaks for him or herself; but this is not all we would desire in such a picture. The precisian [sic] looks at the composition and exclaims, 'Alas, how little did Stothard know of the proprieties of costume!'. These too were the high days of the asphaltum infatuation, and the picture is cracked down to the canvas". Stothard exhibited two paintings depicting characters from Shakespeare at the Royal Academy in 1813 (no.149) and in 1821 (no.209). The catalogue entry for the picture shown in 1821, "Shakespeare's Characters- Falstaff, As You Like It, King Lear and Macbeth" may indicate a picture of a different design to FA 197, or may simply be an abridged description of one of the versions of this subject. Boase wrote of the Academy exhibition of 1813, "Stothard contributed a group of Shakespeare's characters, but it was hung above the work of a younger artist, as Stothard himself admits [no reference given], his picture only obtained a glance from the crowd when they could get close enough to admire the delicate precision of David Wilkie's Blind Man's Buff".

Two sheets of pen sketches for the various figures are in the V&A (museum numbers 7341 and 7342). In the Tate Gallery's reduced version (no.1830) some slight alterations are made notably in the sprites above Prospero, the moon over Hamlet's head, and the position of Malvolio's left arm, which in FA 197 has gone to form an unmistakeable gesture. The watercolour version in the Whitworth Art Gallery, Manchester (no.D.38.1892) follows the Tate design closely, though again with some minor adjustments. A further version, or perhaps a copy, was bought by Agnew at Sotheby's on the 4th December 1957 (lot 154, panel, four and half by sixteen inches). Mrs Bray (Life of Thomas Stothard, RA, 1851, p.244) makes further references to pictures of this subject; in an account of Stothard's studio sale of 1834, and among works by Stothard exhibited at the British Institution in 1841.

In 18th century Britain William Shakespeare's plays underwent something of a renaissance in popularity. A number of significant new editions of his work were published and the theatrical revival from the mid 18th century relied heavily on productions of his plays. Shakespeare had become associated with a rising British nationalism, which led also to a growing interest in British history. This tendency was exploited by John Boydell's Shakespeare Gallery; Boydell was an engraver and publisher who commissioned oil paintings for exhibition, with the intention of generating interest in printed versions. He began the project in 1786, which led to an illustrated edition of Shakespeare's plays, and a folio of prints. It is not clear whether Stothard exhibited finished oil paintings in Boydell's gallery, but he contributed designs to both the Folio and the Illustrated edition. The taste for Shakespeare continued into the early 19th century, and Stothard clearly felt there was a market for such images, as witnessed by his exhibition of this subject in both 1812 and 1821.