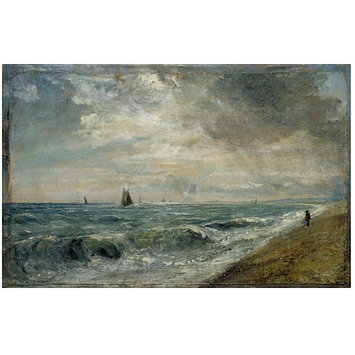 Constable's wife Maria suffered from tuberculosis. The family spent many months at Brighton and Hove in a vain search for a seaside cure. Constable sketched the coast and wrote, 'there is nothing here for a painter but the breakers - & the sky - which have been lovely indeed and always varying'.

The canvas is larger than the paper and the painted area has been extended nearly to the edges of the canvas; it is not clear when or by whom this was done. The sketch was probably painted before being strained on canvas, as there are pinholes in the corners of the paper. There are numerous pentimenti altering the position of the boats on the sky-line.

oil on paper laid on canvas

Given by Isabel Constable, 1888

Historical significance: In his letter to Fisher of 29 August 1824 (Beckett, VI, pp. 170-2), Constable gives an unflattering description of Brighton and concludes: "In short there is nothing here for a painter but the breakers-& sky-which have been lovely indeed and always varying. The fishing boats are picturesque, but not so much so as the Hasting boats which are luggers ... But these subjects are so hackneyed in the Exhibition, and are in fact so little capable of that beautifull sentiment that landscape is capable of or which rather belongs to landscape, that they have done a great deal of harm to the art -they form a class of art much easier than landscape & have in consequence almost supplanted it ... " Constable had offered to lend Fisher one of his Brighton sketch-books but was eventually unable to do so because of the suggestion that the sketches should be engraved (see note following No. 284). In place of them he sent a number of oil sketches . He refers to them in his letter of 5 January 1825 (Beckett, VI, p.189): I have enclosed in the box a dozen of my Brighton oil sketches-perhaps the sight of the sea may cheer Mrs F-they were done in the lid of my box on my knees as usual. Will you be so good as to take care of them. I put them in a book on purpose -as I find dirt destroys them a good deal. Will you repack the box as you fmd it. Return them to me here at your leisure but the sooner the better". In his letter of [6] April 1825 (Beckett, VI, p. 196) Fisher speaks of returning the Brighton sketches, and sending with them two volumes of Paley's sermons: "They are fit companions for your sketches, being exactly like them: full of vigour, & nature, fresh, original, warm from observation of nature, hasty, unpolished, untouched afterwards".
The inscription on the back of No. 266 [Museum No. 591-1888] shows that it was almost certainly one of the Brighton oil sketches in this batch sent by Constable to Fisher. Others among the sketches certainly painted in this year (Nos. 263-265, 267 and 268) [Museum No. 782-1888, 783-1888,148-1888, 335-1888,149-1888] may well have been included in the consignment.

In 1824 Constable's sole exhibit at the Royal Academy was 'A Boat passing a Lock' ('The Lock') (now in the collection of Mr. S. Morrison). 'The Hay Wain', the 'View on the Stour near Dedham' and a 'View of Hampstead Heath' were exhibited at the Salon in Paris in this year. He took his wife and family to Brighton for the first time in May, and himself spent some time in London and some with them in Brighton, returning before them at the end of August. 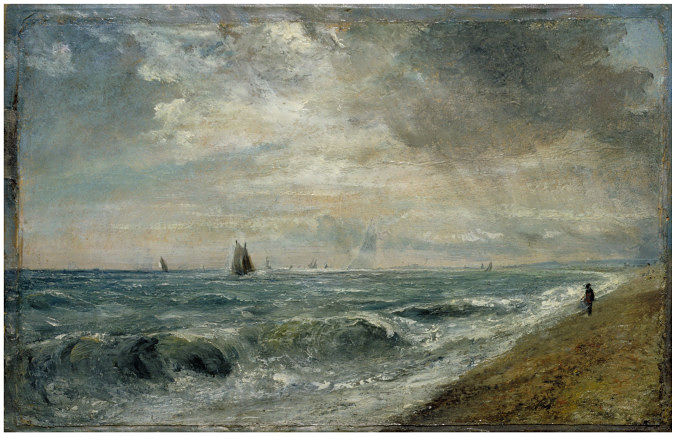